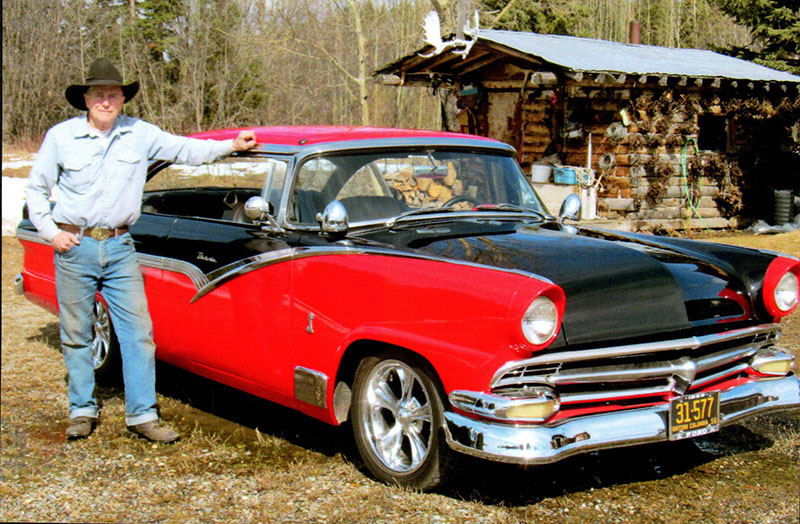 Submitted by Bernard and Jo-Eane McKay, Prince George, BC

My career as a car guy goes back to my high school years. In 1962, at age 15, my grade ten class took a trip from our school in New Westminster BC to Seattle Washington along the newly competed Interstate 5. Some of my classmates were pointing at the new Chevy II s and a few Corvettes. I was looking for Ford and Oldsmobiles. My Dad had owned a 1951 Olds Rocket 88 when I was 13 years old and that car and its V-8 motor impressed me. Around that time, I saw my first 1956 Crown Victoria and that would be my favorite car from that point on.

I was one of the few guys at our school to not only have a driver's license but also a car to drive. By 1965 I was illegally drag racing on my local 'drag strip' most Friday and Saturday nights. In the course of 18 months I went through 5 cars. The rear ends (side gears) would break on the '55 and '56 Fords. I was at the stage of life, 18 years old, when I 'thought 'I knew everything but actually knew nothing. That usually points to a career in politics.

I was getting good at working on Y blocks and re-built a 272 complete with¾ race cam. The best Y block I ever owned was out of a 1957 Monarch Turnpike Cruiser. By 1957 the 312 was improved enough that the rear seal didn't leak and even the automatic transmission real seal didn't leak. The 312 had the most horsepower and really spun the wheels of my '55 two door post.

In 1967 I met the love of my life Jo-Eane and we got married in June of 1968. Our honeymoon car was my 1956 Meteor Crown Victoria. I had reversed the rims and put on the typical (for the times) baby moon hubcaps. Of course, a floor shifter had to be installed. This was a rare car with only about 600 Crown Victoria Meteors built in Canada. I wish I still had that car today.

Like most young married couples, we got wrapped up in life and work. In 1972 we moved up north to settle in the wilderness log home I built 35 miles north of Prince George. Here is where we raised our 6 children. I ran a big game guiding outfit to hunt moose and bear. I also trapped during the winter. In 1979 I just had to get back into a '56 Ford so I purchased a rust free 1956 Victoria complete with a continental kit. I re-painted the car and enjoyed it for a few years before selling it.

In 2009 I got the itch again and bought a 1956 Victoria from Arkansas and had it shipped to Vancouver BC where I trailered it home to Prince George. I had big plans for the car in that it would be restored to modern, a resto-mod. The 302 cubic inch engine and 3-speed automatic would have to come out. In 1966 I remember the only Ford that beat the pants off the Chevys with their 396 and 427s cubic inch motors was the 1966 Ford Fairlane with the famous 427 side oiler, so I purchased a Ford racing 427 Cobra motor. I had my son-in-law Dan Caruso build me a 4-speed overdrive transmission to handle the 525 hp that the 427 put out. I had a new complete custom 9" Ford read end assembly built and had it shipped up from Vancouver. The rear end ratio is 3. 73 to one. I also had a big drive shaft built. The car has Granada front spindles, rack and pinion steering, coil-over adjustable shocks and a boxed frame complete with¼" thick by 3" wide steel welded to the underside. This stiffens and strengthen the frame.

If you're going to drive fast you better be able to stop fast. So, I have 4-wheel disk brakes. Dual master cylinders with hydro boost power brakes were added. A Lokar shifter and an 'I did it' steering column were installed. An after-market air conditioner keeps the inside cool and a 4-pass radiator with thermostatic controlled electric fan keeps the Cobra engine cool. With the big horsepower I also keep a dozen fresh donuts on the front seat in case the
R.C.M.P. pull me over for speeding.

The interior has custom leather seats. Bucket seats in the front are from a 2005 Thunderbird and rear bench seat from a 2004 Cadillac. The gauges were after-market (classic) as well as the speedometer which is satellite controlled. Body modifications include blanking the hood, doors, and trunk deck. A 1954 Dodge grill fits in the front and taillights from a 1955 station wagon are in the back. The paint is black and Viper sports car red. The wheels are Boyd Coddingtons. Big & Littles -18" on back 17" on front. The 10" width of the back tires and the positract rear end help to keep her straight when I want to put the hammer down. The front and rear bumpers were smoothed (no bumperettes or bolt holes). The door handles were shaved, and the doors open via solenoids off the key fob.

My '56 is no trailer queen. Our local car club, the Prince George Cruisin' Classics, has an annual summer cruise for about a week. We travel around BC and sometimes down to Washington State. Every Thursday night in summer we cruise the A & W in Prince George, my wife and I travelled down to Lewiston, Idaho for their car show this past summer. Ours was the only Canadian car in attendance and the American boys sure made us feel welcome. This coming summer we're planning to attend the 4th of July car show in Blaine Washington (if the border opens again after the Covid pandemic).

I thank my wife of 52 years for her patience over the years. I also thank my good friend Russ Cook for his mechanical help. He's an excellent mechanic and welder when it came to all these modifications.