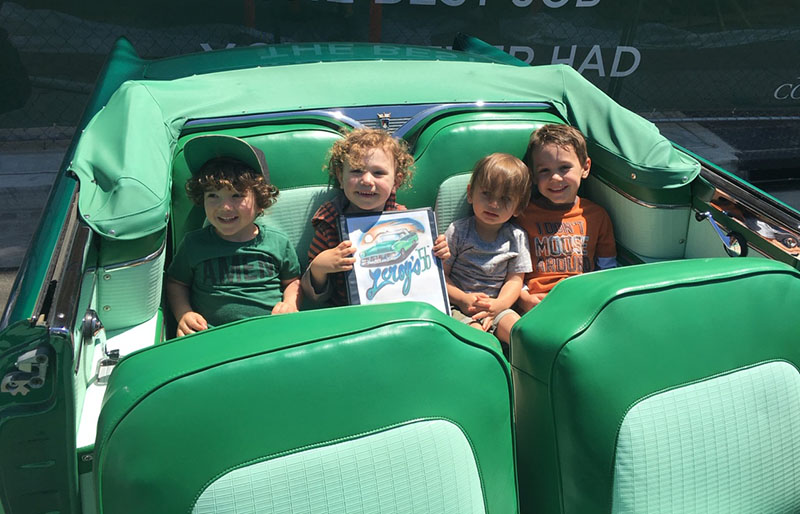 My story, I believe, is different than most of you. My father didn’t have a 1956 Ford; in fact, neither he nor my mom even had drivers’ licenses. They lived most of their lives in New York City. I didn’t have a 1956 Ford in high school or grew up wanting one. Truth is I was actually a fan of Chevy’s growing up. I graduated high school in 1975, so these Fords weren’t really popular with the people I knew. My love for this car came many years later and 3000 miles away.

In 1956 a young man by the name of Leroy Johnson bought this Pine Ridge/ Meadowmist Green Sunliner in Salinas, Ca. He got married in 1960 to Wanda and they had Lisa in 1961 and Chuck in 1964. He told me once that in the 60’s, he went to trade the Sunliner in for a new Galaxie and the salesman at the dealership told him he would give him $100 to take it home. They didn’t want it. So…… that’s what he did. The car was kept and after a while was just parked in the garage. In 1972, when they moved into their new house in the Prunedale area of Monterey County, California the car came too. It was parked in that garage, where it sat for years.

My journey to California went like this. My brother, John, married a girl from the Monterey Peninsula, Jeanne, while in the Air Force, and then settled there after getting out. I moved there in 1978, at age 21. Early in 1979 I got a job with Ma Bell in Monterey, then, early in 1980 I got a transfer to Salinas. I actually worked with my future mother-in-law; who also worked for the phone company. Not long after that I met my future wife Lisa, who, you guessed it, worked for the phone company too.

The first time she took me to her house is where I first saw the 56.

It was in 1981, when I went to the house and the car was in the garage. I don’t remember ever seeing a Sunliner. I fell in love with it right away; I believe that this body style is one of the most beautiful cars ever built. There were some modifications done. The hood ornament had been removed and the hole filled. The trunk lock and badges removed and the holes filled with a “popper” installed to open the trunk. The car was lowered by blocks and there were several other small modifications made to the interior as well. All of these things were done in the late 50’s and early 60’s. The engine had been rebuilt and bored .30 over sometime then also. Of course it was dirty, the top was down and the whole inside of the car was filled with boxes. It was a mess.

Lisa and I were married in June of 1982. When we went to visit the in-laws, I would clean up the car and work on some little issues to pass my time. Now I was able to see all the issues it had. The convertible top was completely gone, one of the convertible top arms, on the passenger side of the car, was broke, interior was worn, dried paint on the carpet, bent up spot lights and the driver door would not latch. One good thing was the original 292 still started!

Leroy knew I was interested in the car so, sometime in 1983; the proposition was made that “whoever gave him his first grandchild would get the Sunliner”. Lisa’s brother at this time was only 19, not married and living at home.

July of 1984 my first son was born and soon after that my father-in-law delivered on his proposition. I really thought he was joking but I think he was just tired of the car in his garage. So, we moved it to mine. I couldn’t believe it!

I went to work cleaning it all up. I was able to find a replacement arm for the top from an ad in Hemmings. I bought a new top from JC Whitney and put that all on. I worked on the driver door until I got it to latch, did a few other things like the brakes and fixed the few electrical issues it had.

After that I got it registered and started cruising! It was so great. I added seat belts to the back seat so I could take, by now, my two boys for rides.

In 1987 we were able to buy the house and 5 acres next to the in-laws. The convertible was back near where I first saw it.

By 1992, the family had grown to three boys and time and money became issues. The convertible was now parked in my garage. Not much had been done on it for a while. Then, the job transfer, I had to move to the Fresno area, 160 miles away, in order to keep my job. This was not a happy time for the family.

Leroy was close to retirement at the time. When we were packing and getting ready to move I asked him if he wanted his car back. I told him at the moment I couldn’t do anything with it but didn’t want to get rid of it. He was surprised by my offer. I told him I would give it back to him with one condition, that I would get it back when he didn’t want it anymore. He agreed to the deal and we drove it back into his garage. His love for the car was rekindled! He had the few body issues fixed and had it repainted. He replaced the gas tank, and had the interior redone. Whenever we came to visit he would show me what he had done and we would talk about what else he wanted to do. He would always tell me and my boys that the car would be ours again.

In early 2010 my father in law, Leroy Johnson passed on. It was one of the saddest days of my life. He was a Ford man and so was his dad and brothers. I became a Ford fan because of him. Like he promised, we got the car back.

The car has had many things changed from original in the past and we want to drive it and not have it sit like it had for years. The car now has a fresh rebuild on the 292. It was bored .30 over again and we added an Isky cam, a 57 intake manifold, new Holley carb and a distributor from a 1964 292. It also has power disc brakes in the front, new Goodrich tires, new Classic Instruments gauges, and electric wipers and has been completely rewired. We replaced the ford-o-matic with a C4 and installed a new pump, hoses and cylinders for the top. There is still so much to get done. I’m not a mechanic, so I was very lucky to find a Y-block expert, Tim McMaster, to do the engine work for me. I did do the rewire, brakes, the top work, including the hydraulics, alternator conversion, electric wipers and installed the gauges. There is still so much to do but its drivable now. It certainly doesn’t compare to any frame off restoration but it still gets a lot of attention at the local car shows or anytime we take it for a drive. It has even won a bunch of awards. I always tried to get Leroy to enter it into some local car shows but he would always tell me it wasn’t ready.

In 2016 we took it to a car show in San Juan Bautista which is near where Leroy lived. My brother-in-law Chuck lived there and invited us to stay with him and his family. Chuck and I drove the car down to the show. It was a beautiful day and we met a friend of Leroy’s that hadn’t seen him in years. He remembered Leroy’s younger brother driving this car to high school in the early 60’s. He was excited to see the car and we were happy to meet someone that knew Leroy and he shared a bunch of stories with us. We also received an award! It was a great day!

Fast forward to September 2019, I took the Sunliner to the Remember When, Airplane and Car Show at Chandler Executive Airport in Fresno. It was extra special because it was going to be an episode of the My Classic Car with Dennis Gage TV program. (Season 24, episode 12) It was a beautiful day with many beautiful cars and planes. My car was not featured, understandably so, with all the really nice ones there. But when the show aired, I was contacted by a friend to check it out. To our surprise, they have me driving in to open the show!

Sometimes I think about taking the car somewhere to have it professionally done. I don’t want it back to original but sort of how it is now. But then I realize the money it would take, and the time it would be away from us and it’s also hard to trust a stranger with something we cherish. I have had offers to buy the car and the answer is the same to all, that we are not interested. Now my boys are all grown up with boys of their own. All five of our grandsons have ridden in the Sunliner, they all love the car too. My hope is that our sons or grandsons might take the car and continue this story after we’re done with it. Lisa and I have been married for almost 38 years now and this car has brought us all a lot of happiness. Whenever I drive it, I think of Leroy and wish he could have shared all of this with us.