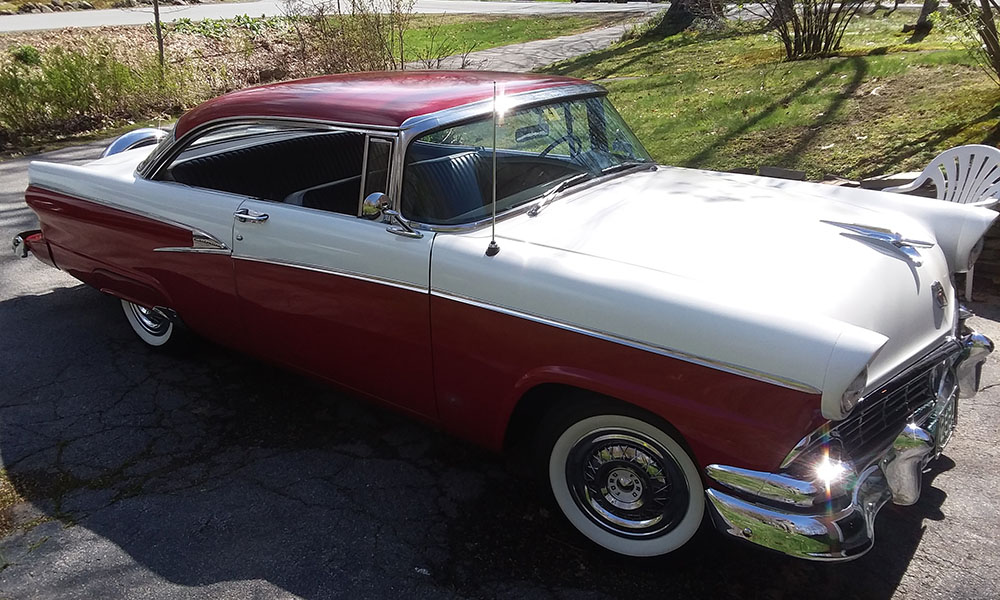 On July 17th 1986 my wife Susan and I had the pleasure of purchasing a 1956 Customline Victoria that we discovered in a local newspaper ad. Our collector car journey began with seeking a car from my wife’s year of birth (1955) and were in hope of finding a Crown Victoria in our price range. Along the way I found a ’55 Chevy Bel Air 2 door hardtop which Susan nixed immediately as it burped antifreeze in our driveway when I brought it home to show her. After I missed a nice ’55 Fairlane 2dr sedan in a car corral at a local car show I was starting to get discouraged until that fateful ad appeared. At that time I had never realized that Ford had made a Customline 2dr hardtop having seen many 2dr and 4dr sedans. I was about to get an education when I went to see the car which was parked in a gas station lot in North Andover, MA about 20 minutes from our Atkinson NH home.

Not only was it a Customline Victoria, it was a 223 6 cylinder 3 on the tree with overdrive, manual steering and all. It had just been driven from southern California to Massachusetts the previous fall by its (at the time) current owner and spent the winter in a cozy garage for the usual long New England winter. Since it was a California car from new it had absolutely no rust on it (to this day the entire underbody is original and looks like a 3 year old car’s chassis) something not seen in New England. After a test drive and determining a few things that had to be addressed, I made an offer to purchase the Vicky. After a month of back-and-forths my offer was accepted and the red and white Vicky became ours.

Where is that car now, you might ask? Fortunately 34 years later it is still in our possession, carefully garaged when not being driven to cruise nights or shows. One of the first things we did once we bought the Vicky was to join the Crown Victoria Association (seen in a Hemmings ad) in October of 1986 and have maintained continuous membership since then. Our Vicky graced the cover of the FoMoCo Times in December of 1987, back in the days of black-and-white print. We have had the immense pleasure of attending two National Conventions, 2004 in Nashua NH and last year in Amherst NY (hotel was located 3 miles from my wife’s childhood home). We have met some wonderful people as a result of joining the CVA and many of the vendors we have utilized for parts and expertise are associated with the club. Over the years the Vicky has been constantly maintained and improved. All exterior chrome has been replaced, fender skirts and Continental kit have been added, as well as wire hubcaps and other accessories. Of course, a primary source of parts continues to be Toby and Sandy Gorny of the FR Parts store as well as Mac’s, Bob Burgess, Concours Parts, Larry’s TBird Parts, Just Dashes, Tee-Bird Parts, Coker Tire Co., Dan Pixler, Steve Rocke, and most recently Norbert Doll from whom I was able to purchase a nice tissue dispenser at the Buffalo convention.

Ownership of our ’56 Vicky has also given us the opportunity of meeting folks who have become great friends. Early in the ownership of our car, I had two different gentlemen chase me down to see if my car was for sale. First was Ted Peach of Marblehead MA and second was Win Stubbs of Salem NH. Though they were disappointed when I declined their offers to buy my Vicky, they both eventually found two beautiful ’56 Fords of their own. At a car show in nearby Topsfield MA about 28 years ago a gentleman asked if he could look under my dashboard at my heater controls as he had a ’56 Sunliner that his father had purchased brand new and was doing some repair work on at the time. The gentleman was none other than Jim Rock, now our Upper Northeast Regional Director. At that point a friendship with Jim and friend James Baptista has spanned many years. Other folks I have met through the years are Lou Berthiaume of Massachusetts, Paul Boucher of New Hampshire, and Ralph Chadsey of Massachusetts. Of special note is my friendship with Paul Goldthwaite and his son Shawn of Bunting’s Auto Body in Atkinson NH whose shop is within walking distance of my house. They have been working on my car for over 30 years doing both mechanical and detail work. Another friend is Bob Genesse of Genesse Auto who also has provided expert service on our Vicky. Our hobby is about the cars, but is most importantly about the people we meet as a result.

Another person that I was able to reconnect with is the Vicky’s previous owner, Tom Fountain. Tom is a manager at a local Ford dealership and I surprised him one day a couple of years ago when I drove up in “his” old Vicky. He was amazed that I still had it and loved the improvements I made to it. It still wears the same repaint that he had commissioned when he owned it in the late 70’s and he loved the way it had been maintained through the years. When he sold me the car, he also gave me some original documentation from the first owner including the original finance contract and copies of the original title and registration. The Vicky was built on May 31st 1956 in Long Beach CA and delivered to Fred Hauter Ford (now closed) in Montrose CA. My guess is that the original owner must have factory ordered the car because she purchased it soon after it arrived in June of 1956. Options included Overdrive, Styletone Red & White paint, gray cloth interior, radio, clock, safety package, tinted glass and whitewall tires. It is one of only 33,130 Customline Victorias produced for 1956 and I’m sure very few were produced with this drivetrain. I have kept all the invoices for parts purchased and work done since I have owned the Vicky. It is really amazing that it has been in continuous running condition for 64 years!

I hope that those of you who are fellow Customline Victoria owners send in some pictures of your cars so that maybe Travis can put together a “Customline Vicky” page. That would be really fun to show off a “rare” car (for Ford) and its many variations to other club members!

As I write this, we are anxiously awaiting the arrival of spring and the time to wake Vicky from her long winter’s nap…for the 34th time!