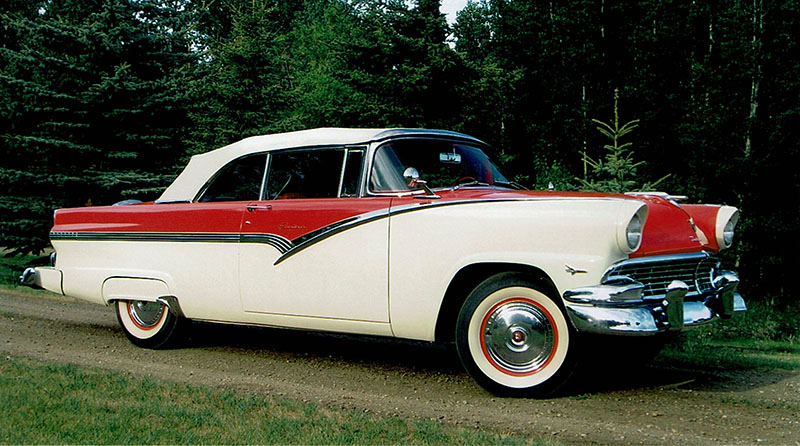 I met my husband George in 1986 and he was passionate about 1956 Ford cars and trucks then and had been for some time. His first car as the son of a farm family was a ’56 Ford and the joy he received from owning that car fired his passion. There are stories in the farming community of when George outran the cops with his beloved car on occasion.

A motorbike accident in 1973 left George in a wheelchair, but that never did slow him down much. He still farmed, worked as an Occupational Therapist at a local Brain Injury Hospital in Ponoka AB and continued to accumulate and work on his 1956 cars…..always buying……never selling. So, as a result there are a few ’56 Fords still sitting on our farm

In 2009 we acquired this 1956 Ford Fairlane Sunliner convertible from Westward Auto Inc in Westlock AB. The previous owner had purchased it from eastern Canada. He said he drove it to Post Falls Idaho for a CVA convention putting on 750 miles and it never missed a beat. It has a 292 motor, automatic transmission, dual chrome OSRV mirrors, rear mount deck, antenna, continental kit, white wall tires.

Being in a wheelchair, George had to install hand controls in the car, which is easily done, in about 15 or 20 minutes and you are ready to go. We took the Sunliner (in trailer) to Penticton BC for the Annual CVA Meet a few years ago. What a wonderful weekend we had. We have taken it to car shows and cruises in our area and also in the Ponoka Rodeo Parade on several occasions.

Over the years, George has gained a vast knowledge of 1956 Fords and loves to share that knowledge chatting with fellow car lovers. His favourite car magazines, which he has received for many years are the Fomoco Times and Old Autos, (a Canadian Newspaper for the Enthusiast).

In the last few years George’s health has not allowed us to be as active with the association and the Sunliner has been stored in its trailer for safe keeping. But George’s love of the 1956 Fords still goes on and has prevailed for over 55 years!