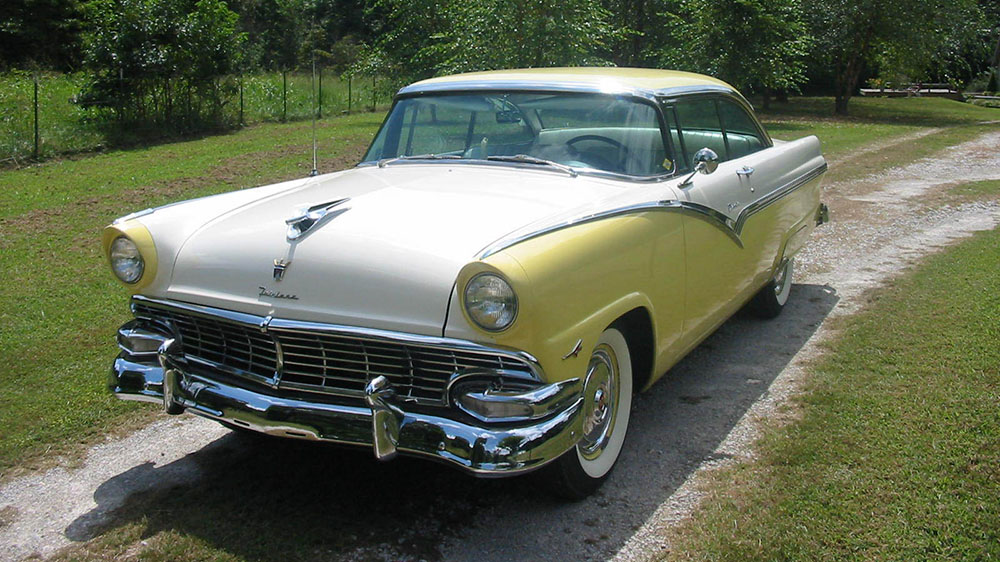 On August 2, 2019, Marcy and I celebrated 50 years of marriage. During that entire time, Marcy (really Marceline) gets credit for her patience while I chase parts, spend money, and get greasy in the garage. Here is the latest adventure which she supported. In February 2016, I bought our 1956 Victoria from an Arkansas seller on eBay for $28,000. Friend Butch Forte and I drove a trailer down to Gravette, Arkansas to get it, and drive straight back to North Haven, Connecticut, non-stop, to bring it home. It was done to a good standard, but I wanted better. So, a repaint, new interior, new rubber, new brakes, rebuilt motor and transmission were done, to the tune of $18,000. I also installed a new windshield, replated bumpers, Diamondback radials, and glass packs. CVA member Hal Bailey of Savona, NY sold me the missing bumper jack. I lowered the car two inches and added Dodge Lancer wheel covers. I kept one of the 10 Commandments for Car Collectors: “Thee shall not tell thy wife the cost of the latest restoration; at least, not all at one time.” I am 76 and Marcie is 72…but she looks younger than her years. Look at how neatly she fits in the trunk of our Victoria!

Much credit belongs to my expert friend, Jim Donroe, who was meticulous in doing upgrades on mechanical restorations. All was done in a little over a year. Then in 2018, I took the car to the Adirondacks Nationals with 6,000 cars competing. Our car was voted “One of the Top 50”, and it will be in the Winners Circle this year. It is always driven, never trailered. Our ’56 also took 1st Place at the Booth Memorial Show, Time Machine Car Show, and the Quinnipiac Auto Show.

I did HVAC sales for 45 years, and I grew up a Ford man. My Dad Fred Sandella was a Ford mechanic all of his life. So, my first car was pea green 1955 Ford Customline, 292, “Three-on-the-tree.” My second car was a 1956 Ford Victoria two-door hardtop, same as now! Only that car was red and white, while my car now is yellow and white. Decades later, I took my 1956 black and yellow “bumble bee” Ford Sunliner to Lead East in 1986, and it took first place in the CVA Regional Meet there. I still have that trophy, as its very special to me. 1986 was the year I joined CVA—33 years ago! We know the CVA old timers.

I must say that Marcy is an angel on earth, but not just for putting up with me and the old car bug. Also, she was a hairdresser most of her life. But now she does it free, no charge, for seniors in nursing homes. Standing for long hours is hard on the knees, and she has had both replaced. But she still works at making seniors look their best. All this plus her canning skills and going to car shows with me. It is fitting that Marcy’s car is a 1965 Mustang convertible, the exact ’65 Mustang which was on display at the 1965 World’s Fair in New York! “Her Pony” is Prairie Bronze, power white top, automatic, power steering, and power front disk brakes.

We also have a 2017 Ford F-350 which is my daily driver, and it spends its winters with a snow plow mounted. We also have two 2003 Mustang GT convertibles, both black-on-black. Our sons are both motor heads. Michael is age 31 and a diesel mechanic. Matthew is 36 and drives a 2007 Ford Explorer. He is a computer nut. As I think about it, our 50th anniversary on August 2, 2019 is a kind of “celebration of life” because we have so many blessings. Unfortunately, most celebrations of life are done at funerals. Ours, on the other hand, is a “Celebration of Still Enjoying Life.” We celebrate our good fortunes every single day because of our long marriage, loving sons, and good friends.