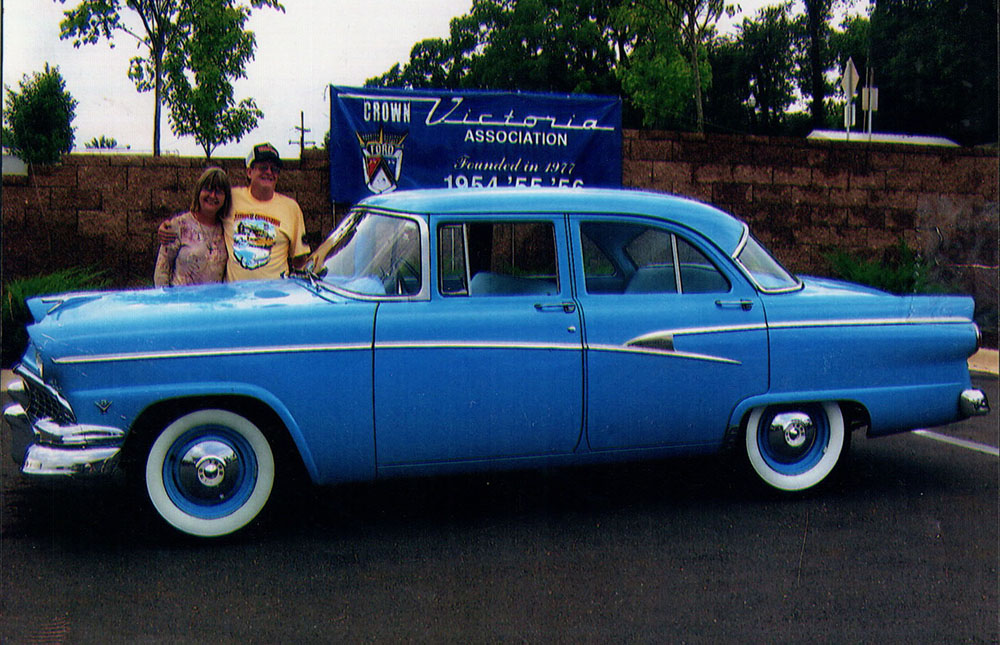 In 2006 a good friend of mine went to the Tri-State Auto Swap Meet in Denver, Colorado. The swap meet is held in the Western Stock Show Complex the first weekend in February off of Interstate 70. As we walked through the complex looking at the vendor booths filled with tons of parts we came upon a booth with a poster board with pictures of things for sale. There was a pictures of a 1956 Ford Customline four-door sedan. My friend and I studied the picture for a few minutes then continued looking for anything au-tomotive that we could purchase four our projects. All too soon it was time to head back to Colorado Springs. On the way back home we both wondered why we had not talked to the guy with the poster and picture of the 1856 Ford and got his phone number. Oh well to late now.

A year passed by and Sharon, John and I went to the swap meet. There was the same poster board with the picture of the 1956 Ford. We stopped and talked to Bill about the Ford. He said that the car was located in Colby, Kansas where he lived. We got his phone number and said maybe we will come look at it at a later date.

Another year passed by and now the year was 2008. My late friend John Williams saw the poster board and lo and behold the Ford was still for sale.

On the way back home I decided to give Bill a call if his phone number could be found in my drawer of stuff. Luck was with me as I found Bill’s number and gave him a call. He said that the car was still for sale and to come take a look at it. A week or two went by and Sharon wanted to go to the Mount Princeton Hot Springs on Saturday. No way, lets go look at the 1956 Ford in Colby, Kansas. Sharon said ok, and we hopped in her Subaru wagon and made our way to Colby.

Bill had the car outside in his storage barn when we arrived. He said, take it for a ride. Sharon got in and we took it for a short ride. It performed well, trany shifted great and it had a really nice feel to it. The odometer read 37,895 miles and the paint appeared to be in the original Bermuda Blue which had some minor dings and dents. Just some garage rash from being stored and no visible rust. How much do you want for it? He named his price and we would have to think about it.

Next week a call was made and we decided that we wanted it. We wanted to look at it again so we made the rip again and took some down payment money. No Hot Springs trip yet maybe later. After paying Bill the down payment we said we would be back in a few weeks to pay the rest of the money and drive it back to Colorado Springs. Still, no Hot Springs trip.

One more final trip to Colby in Sharon’s Subaru. Sharon followed me back home, a 200 mile trip with no problems and the Ford ran great.

The CVA Convention was going to be in Branson, Missouri. We had a great time driving the 1956 to the convention. What a great place to have a CVA get together. We entered the original judged class and won first place.

On the way back home Sharon wanted to drive. Pleas hold the speed down to 65 mph and keep a steady foot on the accelerator. Half wa across Kan-sas Sharon started to giggle. What are you giggling about? The speedometer was a zero. Who know how fast we were going, probably 80 mph or so because Sharon has a lead foot.

The years passed by and we drop the 1956 to Tin-ley Park, Illinois and Bettendorf, Iowa. Still in between trips to CVA Convention no trips to Hot Springs.

Sharon’s health started to deteriorate in 2016. Parkinsonism, dementia and numerous other health problems. Being a caregiver is a full time job. Sharon could no longer read, knit, answer the phone, or turn the TV on or off. Unfortunately, Sharon never made it to Hot Springs as she passed away October 30, 2018. Sharon is now in Heaven soaking up the hot springs when her deceased son, her mother and her sister and her health is renewed and she has a beautiful smile.