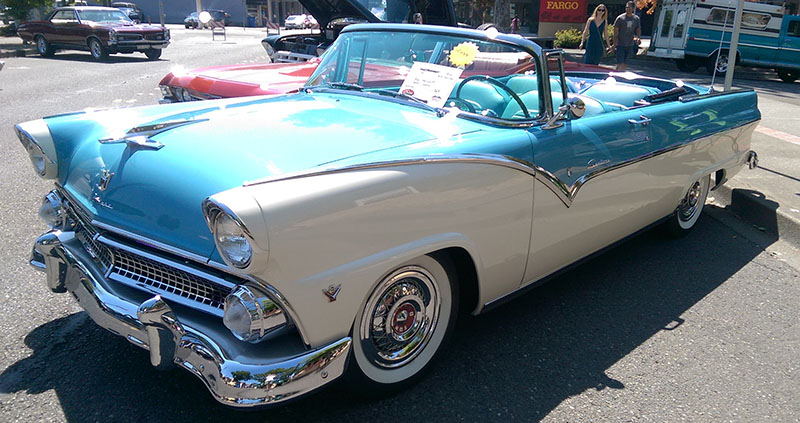 This poor old ford waited a long time but finally got its turn after 17 years of waiting in the corner of my garage. Luckily my wife is very understanding to let this project sit in the garage while we had to park out in the weather.

Lets back up a few years, in the mid 50's to the late 60's my late father would buy a new car every year or at least every other year so that meant that I got to go to the Ford dealership and check out all of the new models every year. A time that my dad and I spent together some of the best times. I cherished those times a lot. I still can't go to a dealership without flashbacks of the beautiful cars and special times with my father. That love of the some of those old Fords has always been with me. Each old Ford I have ever had I know my dad is right there with me, working on an old Ford but mostly when I go for a ride in my 1955 Ford Sunliner and the pipes sound off, I can see that big smile on my Father's face.

When I bought this Sunliner, I had a nice 55 Ford Crown Victoria, Regency Purple and snow shoe white Paint That I had restored, But because I had limited garage space I decided that I would sell The Crown so I advertised in the Fomoco Times and fellow member Sam Battaglea Of El Cajon Ca. bought the car. Sam wanted to drive the car home From Washington state to southern California 1,300 miles, It was in March and there was snow in the mountains on the main highways and this car had all new glass and paint upholstery everything was new or refurbished, I hated to see this car go through all of that so I offered to pay to have the car shipped but Sam was a pretty sharp guy and He had it all figured out, He would stay on the windy coast roads with many small towns to go through and stay out of the mountains where the bad weather was, some of those elevations were over 4000'. It was a good plan, they made it just fine and had a great trip. The only trouble they had was with the wipers. I had installed a new electric wiper motor and it failed for some reason. Sam finished the trip using Rainex. I have found out that all of these CVA Members are pretty sharp individuals. They can fix most anything and know where to find the parts to fix just about anything. Proud to part of a group like this. I have met many good friends through the CVA.

Back to my new project, my 55 Sunliner, every car has a story, all parts located have a story as well. My story started one day going through Ebay looking for a Sunliner Project and I found this 1955 Ford Sunliner. This car was stripped down to a body, Frame, And Broke up Motor with an automatic, fenders and hood from a different 55 Ford car, no interior or anything else. Prefect Right? The car was an Arizona Car with minimal Rust, and I love the hunt for parts, so all was good. I placed a good bid and lost the car to someone else in Idaho. Oh well. I kept looking and in about three months this car was back on Ebay, so I called and talked to the new owner and asked him what's wrong with this car that you are getting rid of it so fast. He was great to work with, he told me he had bought this car to hotrod it up, but his buddies said that it was too valuable to mess up, so he was going to sell it. We went over the car in great detail and I decided to bid again, and I lost the bid in the last minute so now I'm discouraged about this car and just quit looking. Fast forward about a year I got an email from the winning bidder of that Sunliner and he asked me to call him and he was another CVA guy. So, I did, and he wanted to know if I was still interested in the Sunliner that I had bid on. My first Question was what the heck is wrong with this car everyone that buys it wants to sell it. He sent me many pictures and answered all of my questions. Number one question is why you are selling this car. He bought this car and had planned to use his Moms 1955 Ford crown Victoria for parts to restore the sunliner, the problem was that his 55 Crown was bought brand new by his mom and again his buddies talked him into restoring his moms Crown. So now the Sunliner is mine. The car was shipped to me from Georgia, around Texas and California, Montana then my house in Washington state From my first bid on Ebay in Arizona the car traveled over 6,000 miles, first it went to Idaho then Georgia and then back to our house in Battle Ground Washington and it didn't even run or operate in any fashion. And finally, it was in my garage now and the parts search was on, Ebay, internet, swap meets, friends and under rocks or any adds and dead ends. After about a year or so my job of 34 years went away. I was a operations manager for a large steel pipe manufacturer. I was in charge of the tubular division. So now with the job out of the way I can really get some work done on my Sunliner . I took a year off of work, just to get my head going in the right direction. After that year I took a job as a project manager at a construction company and they wanted me to run their safety program also. This was a great place to work, much smaller company then my last job and it only had about 150 employees. The only problem it was in construction that means 12 hours every day, but the pay was great so it all worked out great except no time to work on my Sunliner ,so that's why I put this project on hold until I retired in 2014. Then we traveled around in our motor home for a couple of years to warmer winters. I built a new shop for this project and then The last couple of years has been dedicated to restoring the Sunliner. Dealing with body shops paint and upholstery.

1955 Ford Sunliner was originally built and restored to these specs. Regatta Blue on the lower part and Snow shoe white on top section, light blue and medium Blue upholstery, Light metallic and medium blue metallic paint on interior trim.272 Y Block with2 speed automatic. the car came with factory power seat, power windows and power brakes. Every nut and bolt, frame off restoration. The first thing I did when it was finished, I took My 92-year-old mother for a ride. In 1958 My mother drove a nice 55 Ford Fairlane and a couple years later upgraded to a sweet 1956 Ford Vicky.

Many thanks to my wife for letting me spend countless hours on this project and never once complain about the cost of each step.