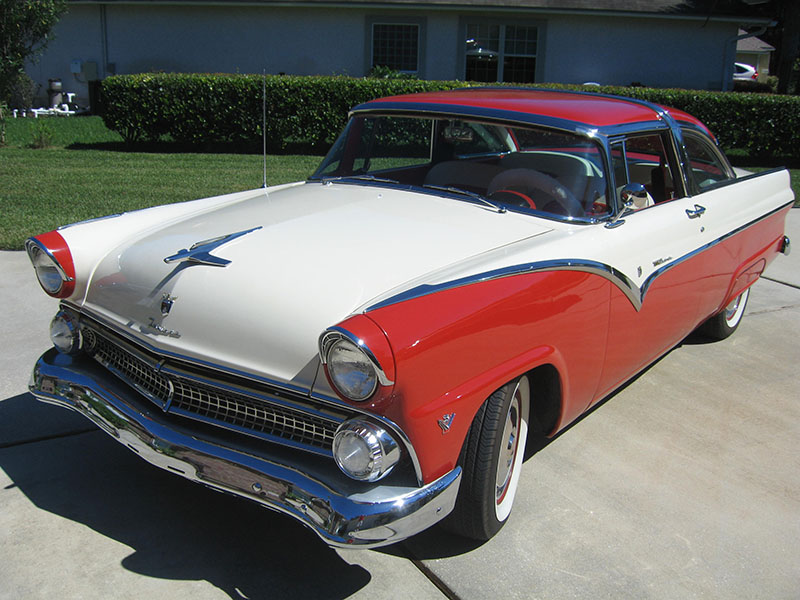 In my (Bill's) earlier days I enjoyed modifying a 57' Chevy to street rod form and later a new 1968 Roadrunner became the cruiser. Like many have experienced, family life brought about a change to daily drivers. Calendar advancement meant empty nester, retirement and time again for car fun!

Restarted with a 34' Ford Pro-Street 5-window coupe and have lots of fun, but can't travel. The little two-seater has no room for luggage, being tubbed with fuel cell and battery consuming the trunk and only 4" of space behind the seats. So a second car was in order.

While inclined to follow the path of many and revive those earlier days by getting another car like the one I started with, I witnessed tri-five Chevys everywhere at cruise-ins and shows - but few Fords. The few seen were typically standard models, manufactured in large quantity. I wanted something different, that would stand out and also look sleek/more modern. Saw a Crown Victoria at a large show and that was it; big, roomy, huge trunk, sleek with a lower roof line than the non-Victoria models, loads of stainless, and only produced in small quantity for two years.

After finding a 1955 Crown Victoria with a good body, but otherwise needing much attention, I decided to modernize it while retaining originality, but no resto-mod look; instead an unconventional "restoration". Performance and reliability became key elements of the plan. So the outside and inside were restored to near original. The outside exceptions included the bumper guards left off when re-chroming and wider rims and (radial) tires. Suspension/tire changes lowered the car two inches.

On the inside the burned out and partially missing front power seat assembly was replaced with manual to provide more head room (I am 6'+), seat belts were added with 3-point in front, and a floor shifter (I throw a black shirt over at shows and it goes unnoticed) added while the column shifter retained for appearance. Two thirds of the monster radio was cut off to accommodate the variable speed wipers and a radio installed in the trunk with the remote stored in the seat console.

While the interior was gutted hi-tech insulation was installed under the roof and on the floor. The entire car was rewired with a fuse panel added, while retaining all the original dash controls and converting to 12v. A set of modern gauges on a rack "fasten" to the bottom of the dash with magnets and can be put up out of sight at shows. And, of course, all upholstery, side/kick boards and package tray replaced. The package tray was cut out for left & right speakers with grilles painted to match the tray.

Unless one has a discerning eye (and the hood kept closed and engine not running), the car looks original both out and inside. However open the hood, start the engine, look underneath or inspect closely and it is clear this is not a original factory type restoration.

The front brakes were replaced with 11" discs with four piston calipers on drop spindles. A shortened 9" limited slip type rear end assembly with F150 drum brakes and lowering blocks went on the rear. A dual 7" power brake booster and master cylinder connected the slow-me-down mechanicals, together with a electric vacuum pump. New, wider custom order steel rims allow fitment of the original wheel covers, while accommodating P205/75/15 radials with 2 1/4" whitewall up front and P245/60/15 with 1 3/4" whitewall in the rear. The combination of rim/tire sizing provides more stopping power up front and the widest rear tires (~ 9" of tread) without tubbing for maximum acceleration traction, while retaining the original fender skirts.

The heart of the modernized beauty is a new special order 351W clone built by a well known race engine shop. With a little ways over 400 cubic inches, the builders standard Ford style race engine was detuned down to a dynoed 469 horsepower with 509 foot pounds of torque (@4,400 rpm on standard 93 octane, to make it very streetable. As a "clone" it looks and is dimensionally the same as a 351W, but starts with a aftermarket race block and consists of all aftermarket race components. A milder cam and smaller carburetor improve street manners and fuel mileage. A new oversized gas tank and fuel lines were also installed along with a aluminum radiator with electric fan.

Exhaust turned out to be a significant trouble area. The engine has aluminum heads with very large ports. None of the aftermarket header manufacturers have anything to fit this car/engine/steering box/frame combination. Several headers were tried and an attempt to modify one set of Mustang headers was unsuccessful. In hindsight, exhaust would not have been such a challenge with a Mustang II steering conversion, but then the original column/wheel/horn/turn signals setup could not be retained. Ultimately a local race shop was found that fabricated tig-welded stainless 1 5/8" headers, which were then ceramic coated in/out. I welded up 2 1/2 inch pipes, attached to stainless performance mufflers to let the engine breathe and produce a nice muted rumble.

To transmit the power a high performance modified Ford 4r70w transmission was installed, with the adjustable controls box in the glove box. A new transmission cross member was fabricated and a separate transmission cooler with electric fan also installed. The transmission is the successor to the AODE and was selected for it's a very low 1st gear ratio for performance, while allowing a little taller rear-end ratio for a great overdrive/improved open road fuel mileage. A custom aluminum drive shaft ties things together, with a drive shaft loop in case things get out of hand. Adjustable traction bars were added to the rear suspension to help the tires hook when desiring to move in a hurry.

After working on this project on and off for about 7 years, it is gratifying to look at and drive the final product and bask in being able to say; I didn't buy it, I didn't pay someone to build it; I did it! And I am comforted in knowing that no short cuts were taken and everything is top shelf. We now look forward to going places.