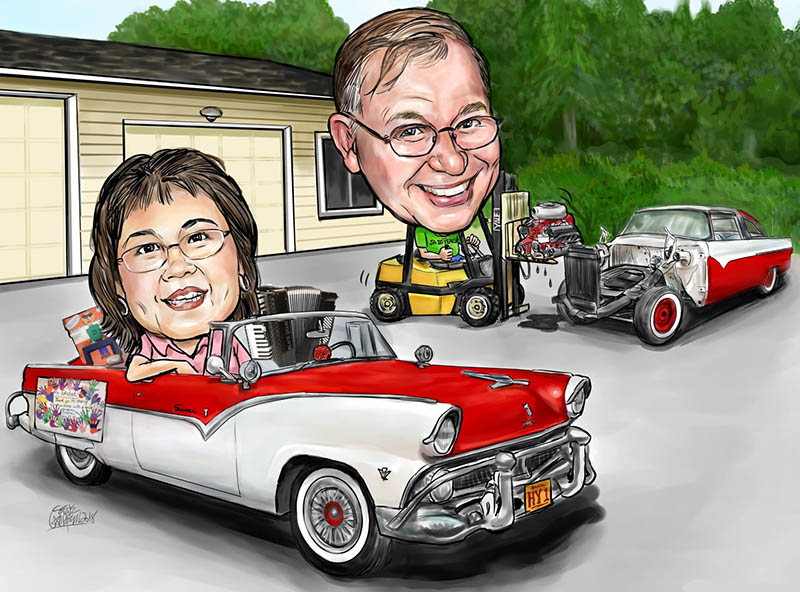 I wrote an article about my friend and co-worker, Dean Held’s retirement last year and published it in the club newsletter. Now it is my turn. On June 30, 2018, I retired from Hyster-Yale Group after 43 years. I retired as the engineering manager of engine systems for my company which designs and builds forklift trucks. It was a great career for a car guy like myself. I had always been interested in how things worked when I went to Benson Polytechnic High School in Portland, Oregon and then to Portland State University graduating in 1975 with a mechanical engineering degree. I had a ’56 Ford Sunliner convertible that I rebuilt with the help of my Dad and brother. I drove it throughout high school. At the end of my senior year (1971), I found a ’55 Ford Sunliner convertible and bought it, as it was a more solid car (less rust) than my ’56. I sold the ’56 Sunliner at that point, of course regretting it immediately. I wrote about the ’55 Sunliner in a previous club article. I still have it and have owned it now for 47 years. My wish had always been to someday have a Crown Victoria and I wanted a Skyliner, though I didn’t think that it would be possible to find one that I could afford. On April Fool’s Day, 1978, I saw a 1955 Ford Crown Victoria Skyliner for sale in the local Oregonian newspaper in a wrecking yard in Sherwood, Oregon a small town outside of Portland. Even though it was in rough shape with lots of rust, I bought it, telling my wife, Kim, that we could part it out to recoup our investment if we had to. I knew that I did not want to part it out, but it would need everything and I had never done such a complete restoration of a car before. It needed to have the body removed from the frame and stripped.  In the first 3 years of ownership of the Crown, I worked pretty hard on the car, removing the body with the help of 8 friends, lifting it off and putting it on another friend’s trailer for the trip to Redi-Strip. I sandblasted the frame and suspension components in the driveway of our house and found a used 272 engine to rebuild to replace the engine in the car that had a cracked block. The project proceeded well, completing the chassis rebuild and drivetrain installation and even showing the completed chassis in a local car show in the Fall of 1980.

With a couple of friends, I started “5 and 6 Products Company” which reproduced the 1955-1956 Crown Victoria Door Trim Tabs and sold them to Crown Victoria owners for several years through word of mouth and ads in Hemmings Motor News. The creation of these die cast parts was quite a project in itself.  I created the drawings and we had a local tool and die maker create the tooling and a local Portland company cast the zinc-aluminum alloy die castings and another local company do the chrome plating for us. We sold hundreds of sets of these parts before disbanding the company in the mid-80’s when life and real jobs didn’t provide us the time for this hobby business. After all these years, the car that I created the reproduction Door Trim Tabs for, is nearly ready to mount them on!!

Over the next 30 years progress slowed with family and other car projects taking priority. I did track down the original owner of the car, Bud Nees, and the second owner of the car Gerald Holtz, where it was originally sold during the Summer of 1955 in Eureka, California. Both gentlemen still live in Eureka. Gerald had purchased the car from his high school friend, Bud, in January, 1956, trading him as partial payment, a 1952 Chevrolet. I also contacted Harper Ford in Eureka, the dealership where the car was sold to Bud. The great-grandson of the founder of Harper Ford, Trevor Harper now owns the dealership. He has been interested in the progress of the restoration of the Crown. The car had been sold to the original owner, off the showroom floor. The original dealership building where the car had been on display in 1955 still exists and is used as a family museum now and has the Harper family car collection on display now. This includes another 1955 Ford Crown Victoria, but not one that Harper Ford had sold in 1955.

In 2010, a friend and co-worker, Chuck Johnson, offered to start working on the body of the Crown. He was an expert at body and paint and had rebuilt several cars of his own and for friends. At that point the Crown was still in bare metal with the phosphate coating that Redi-strip had put on it 31 years earlier stopping further oxidation. I had red oxide primed the bottom and reinstalled the body on the chassis. I had replaced a few sections of the body, but not tackled the lower quarter panels, rocker panels and right side of the roof which had extensive rust damage. Chuck came over to my house most Saturday mornings to work on the body. He wanted the drivetrain to be removed again to give him better access to the cowl, so out it came again. I ended up pulling off the heads from the engine which had not yet been started after its 1980 rebuild and had the valves inserted for unleaded fuel. I also rechecked the engine bearings for any attention they might need. They were still coated with assembly lube and the engine was still in pristine shape. I took the Fordomatic transmission to a local transmission shop to check out the rebuild that I had done myself in 1980. The shop said it was still fine and needed nothing, other than the job that I did cleaning the torque converter had not gotten all of the dirt and contaminate out of it, so they cleaned it better, resealed it and put it back together. Over the next 8 years the car has been making slow, steady progress. The body is complete, painted and mostly reassembled with the exception of the front fenders, which Chuck is still working on. The car has some extraordinary features. It has a New Old Stock (not reproduction) interior! I found a complete NOS interior advertised in Hemmings Motor News in 1983 and purchased it. A guy had bought up some left over 1955 Ford interiors at the end of the production model year and stored them. I was able to purchase red and white seats, door panels, headliner, armrests and rear center armrest. It was an incredible find. The complete upholstered pieces had never been installed on seat frames or panels, so I stored them in boxes until I had a friend who is a retired upholstery guy, Les Diggs, install all the pieces on my restored seat frames and body in 2014. The complete interior is a sight to behold. Looking at and sitting in an original 1955 Ford interior is a real nostalgia trip.

The car also has its original Plexiglas roof panel. It is in remarkably good condition after 63 years. The car has its original power seat mechanism also. I added a continental kit, wire wheel covers and rear deck antenna to match my ’55 Sunliner. I have had the engine started and running, but I have not yet driven the car, even after owning it for over 40 years. After retiring, I should be able to dedicate more time to completing the Crown Victoria and look forward to driving it and showing it at CVA meets.

The attached caricature was commissioned by the Hyster-Yale Group as a retirement gift. It shows my wife and I along with our ’55 Sunliner and ’55 Crown Victoria Skyliner in front of our shop. It was created by FunFaces.com. I was given both a retirement book with the image and a framed large print of the incredible drawing. It is something that we will cherish always.