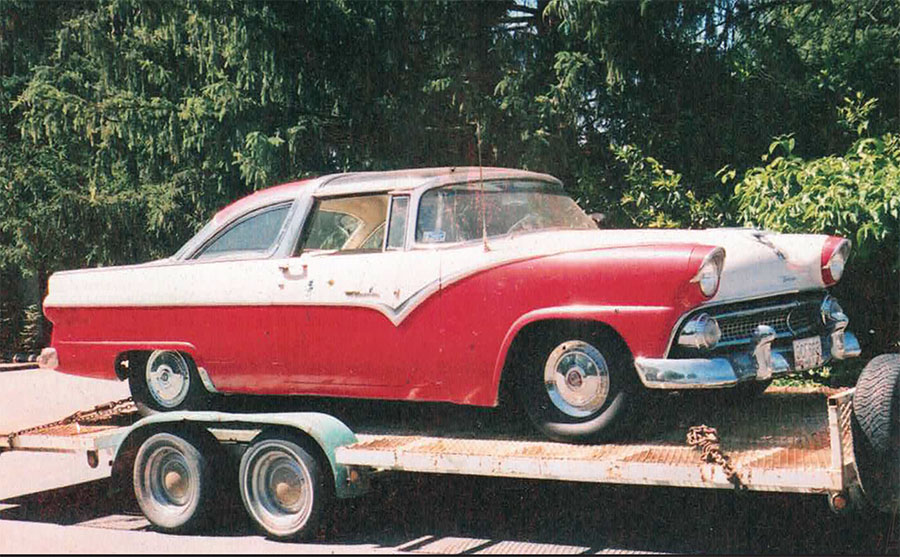 After many years of searching for a "restorable" glass top, I finally got a good lead from a fellow club member, who lives in Spokane, Washington. Another period of time went by, about two years, before I was able to make contact with the owner to view and eventually purchase the car in late 2010, I became only the fourth "proud" owner of the car. It had been described as a "driver". The car was in excellent "original" condition with virtually no rust, the only problem for me was that the car was red and white in colour, I'm not a red car guy, so that would have to change. My plan was to build a car unique to my vision of what I wanted, so the journey "restoration" began.

The car was moved to Post Falls, Idaho where a fellow club member started to work on the car. Some parts were traded, including a nine Ford rear end with large brake drums and a steel crank 292 block, for parts from the car that were not planned to be used in the rebuild. The work was mostly disassembly and putting together a list of replacement and other parts necessary for the job. The rebuild was started on the car including some initial body alignment and metal prepping, some mechanical assembly with new parts, was done on the front end along with some powder coating and frame painting. The stainless trim and chrome trim was sent out to be refinished. The 292 cubic inch steel crank engine was sent away to be worked on by another club member.

The suspension chosen was dropped spindles and disc brakes on the front and large "station wagon" drums and shoes mounted on a rebuilt nine inch Ford rear end that was mounted on dropped springs. Heavy duty front and rear sway bars were to be put on and the brake system was to be serviced with a new polished aluminum master cylinder and proportioning valves for matching up the discs and drums installed.

The engine produces about 400 horsepower; to handle this engine output a 4L60 automatic overdrive transmission was used, and is programmed for the engine specs, gearing of the car and the anticipated driving conditions. An adapter was used to mount the transmission to the Y-block engine. A new transmission mounting bracket was built and a new driveshaft made to make the driveline hook-up. A Lokar floor shifter was installed. The cooling for the engine is handled by a large capacity four core aluminum radiator, with a 16" electric thermostatically controlled fan. At this point the engine was brought to Post Falls and installed in the car.

In late 2011, the car was moved to Shelby, Montana where further body work preparation and initial painting of the firewall, dashboard, door post frames and other necessary preliminary parts were painted. During this time period an after market electric window package, under dash heater/ defroster were purchased. The dash bezel and instruments were sent to Dakota Digital to have everything converted to digital readout and 12 volt. As well the electric clock was rebuilt with quartz 12 volt movement and the radio was converted to a modern 12 volt radio with I-pod capability, a flush mount retractable electric aerial was purchased. Aftermarket electric wipers and windshield washers were also on the list of replacement items. An upholstery package was ordered with the desired colour scheme, Verona Green and Snowshoe White; from LeBaron Bonney.

A rear bumper/continental kit was built using the original '55 bumper, cutting the ends to fit the modified center "hoops" from a 1956 Thunderbird continental kit and making a tire mount mechanism that allows the tire to move away from the trunk lid so it can be opened. Additions to the car body include '56 Mere paint divider stainless trim below the side windows of the car, '56 Ford back-up lens and bezels, '60 Buick "lnvicta" tail-light lens and bezels, both with converted led lights installed. The '55 front park light lens house '57 Chev led lights behind them, while the head lights are high intensity flat face tri-bar lights. The side door locks have '56 Monarch door lock covers and the interior door locks are hand made brass Crown lock pulls. Most of the interior trim, other than the original refurbished stainless has been re- chromed. Because the original green glass top colour was not available, a smoked grey top was made and all the side windows were replaced with lightly tinted grey safety glass.

In late 2013 the car was moved to Calgary, Alberta; where the engine had been built, for further engine assembly. Some other mechanical work was done including installation of a polished aluminum radiator surge tank and washer reservoir tank and the addition of an polished aluminum oil accumulator system to ensure the engine had enough oil under heavy acceleration. Problems started to take place with work being done on the car at this shop, as with most restorations it seems there are problems with at least one of the people hired to work on a car, my guy was the engine rebuilder. Turns out he was not as capable and knowledgeable as he claimed and besides not doing work as agreed to, was very dishonest and made numerous mistakes that had to be fixed later. I highly recommend that others in the club and anyone else reading my "car story" avoid this fellow! The decision therefore was made to get the car out of his shop.

In early 2015, the car was moved to Campbell River, British Columbia where I live. Work was done to complete the installation of the new wiring system, including completing the installation of the battery in the trunk, hooking up the fuel system, which had a new tank with a larger (3/8 inch) feed line installed. The brakes/ lines, transmission cooling, exhaust pipes and mufflers, drive shaft, park brake, shifter and rear end with springs and sway bar were put on the car. Wire wheels and wide whitewall radial tires were purchased along with "lake pipes" to be installed on the car later; the car was taken to a local shop for final painting/ finishing and trim installation. The electric window regulators, wiring, switches and glass were installed along with a new "tinted" and "shaded" windshield and the rear window was refurbished and installed. At this point the engine was fired up and had a "break-in" period without the supercharger hooked up, the car was further tested with the supercharger working, had some test drives to set up the digital dash, linkages and cables. After correcting a number of mistakes including alignment problems of the drive belts on the alternator and the supercharger which required some machining of parts and the construction of a bracket to brace the supercharger to keep it steady, and discovering that the drivers side header was touching and rubbing on the valve cover, which required work on the header to make it clear the valve cover, everything seemed to be okay. Other than the distributer seizing up and killing the motor during the driving testing (which was scary because of the large explosion and the motor stopping instantly) everything else was okay.

Next the upholstery step started by stripping the front and rear seats and painting the metal work before applying the new upholstery. The door panels and kick rear panels were then stripped, painted and upholstered. The front floor carpet was altered to accommodate the Lokar shifter and new throttle pedal. A trunk floor carpet with matching material as the interior floor mat was made in place of the original trunk floor mat. A sun shade curtain was installed as the final step in the upholstery process. The final installation of all the interior trim was done.

The car drives very well and has lots of power, on the first "outing" with it, to our annual "mini" meet the car won the top '55 award. The car attracts a lot of attention and is photographed a lot. The long journey to complete the build/ restoration on the car has been well worth it. For me, the compliments from other car "buffs" and club members has been most gratifying.