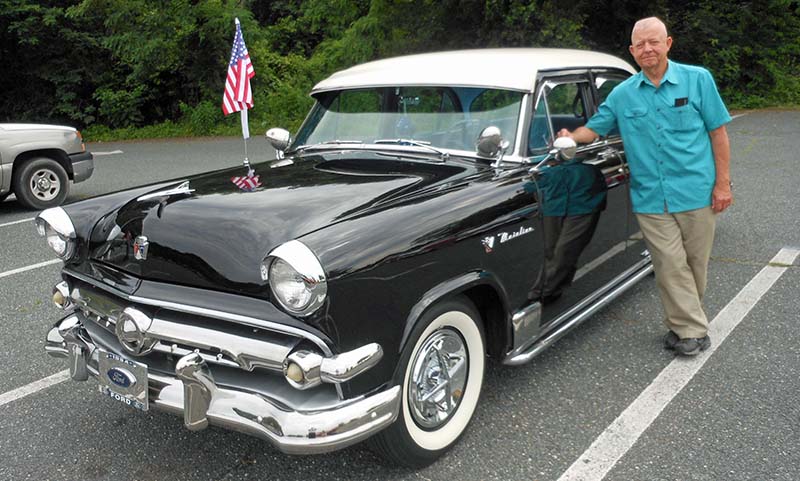 Jackie’s ’54 Ford Mainline is all dressed out as a top-of-the-line Crestline, and more. This black and white beauty is motivated by its original 239 Y-Block with 3-speed overdrive. He bought it six years ago for $5,400 from a guy who said he was “getting too old for an old Ford”. (The guy was 61, so if he was “too old”, what does that make the rest of us?) Jackie is from Betterton, MD on the Chesapeake Bay, and he is a retired patrol boat captain. His boat was 45 feet long. Jackie has put an additional $10,000 into his ’54 to make it stand out and run better.

The ’54 now has laker pipes, skirts, ’54 Mercury spears on the sides, Ford emblems on the tail lights and C pillars, added stainless around the windows, and NOS all metal visor, stainless hockey stick trim on the fender bottoms and rockers, chromed headlight buckets, upholstered trunk, and more. Mechanically, Jackie added a 12 volt Mungrel electrics and bolt-right-on ’68 Mustang with drum brakes and dual master cylinder. Jackie would also like to own a ’55 or ’56 Crown Vic or Sunliner so watch these pages for his next ride.

As told to Paul Placek