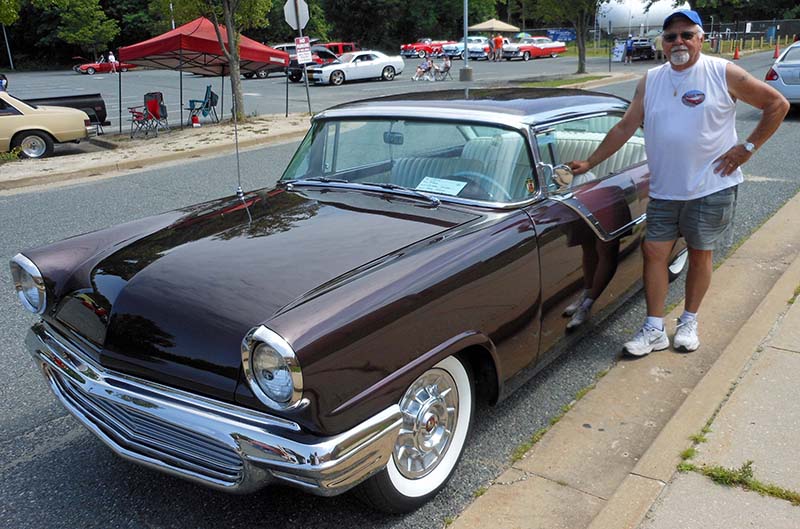 Bob Jadick’s ’56 Ford Victoria is S-M-O-O-T-H. Bob’s car is Egg Plant Metallic and Lavender Pearl with a “fire and lace” paint job on the roof—how many of you have ever seen that? It is mostly shaved and dechromed. Not only are the bumper guards removed, but every bumper bolt head is gone. The hood bird and the door handles and locks are shaved, as are the Ford emblems and trunk lock.

But shaved does not mean plain. It has also been restyled. First, the original Ford front bumper is gone, and was replaced with a 1959 Ford TBird bumper which was sliced and diced and replated. Also, the headlight buckets were replaced with 1955 Oldsmobile buckets, which are slightly peaked at the top. To match the buckets, the tops of the front fenders are peaked to match.

The 1955 Pontiac Chiefton side stainless fit right on the ’56 Victoria with no modification needed. As did the 1955 Merc Wagon tail lights.

Coker wide white radials with 1957 Caddy wheel covers roll it down the road—note the Ford crest in the wheel covers.

Under the hood is a Ford 302 with AOD from a 1986 TBird bored .030 over with roller cam and Mallory ignition. It has PS and PB and front disk brakes. Vintage AC keeps things cool.

Inside are white tufted seats and door panels, and a Lokay floor shifter topped by a glass door knob handle.

By Bob Jadick as told to Paul Placek