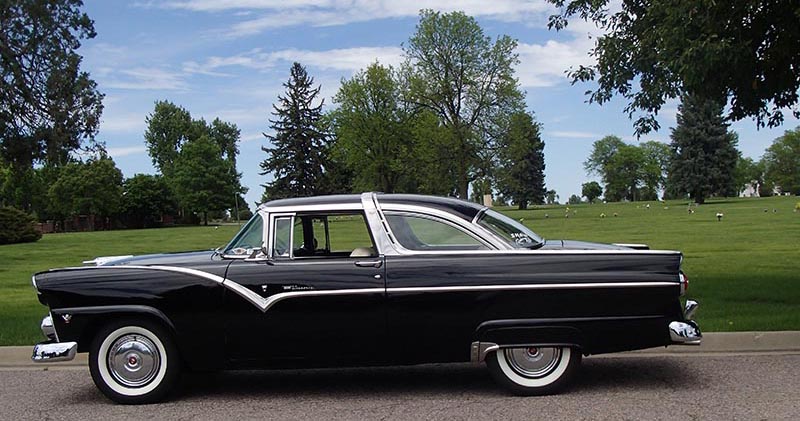 When I was ten years old my oldest brother bought a pretty brand new black ‘55 Ford Crown Victoria with a red and white interior. I instantly fell in love and swore that when I grew up I was going to have a car like his. He kept his 55 for only a year because he got married and they felt they couldn’t afford to keep it. I was devastated!

I didn’t have a car of my own when I was in high school so I learned to drive in my Dad’s “plain” 55 Ford Custom and drove it to my job after school. After graduating I worked to save some more money to put down on a car hoping to find my dream car. I kept searching the paper looking and finally found one listed and convinced my Dad to go with me to see it. The car was at a car lot surrounded by other used cars but as we crossed the street I spotted it. It was sparkling and twinkling from all that shiny black paint and beautiful chrome – just what I always wanted!!! The interior was a faded pink and white so therefore that black beauty became a “she”. She was pretty rough and had lots of miles for only being 8 years old. You could see daylight through back seat floorboards and had lots of bondo on both quarter panels. We started the car and she sounded like pure heaven! A nice loud, low rumble from worn out glass pacs. My Dad tried to convince me not to buy it; he thought it had been through too much and wasn’t worth the money ($495). I said I just had to have her because I did fall in love at first sight.

Well, needless to say, I did buy her even though the car had definitely been in an accident and also apparently had a fire since the gas tank had been replaced with a smaller tank (found out the hard way by running out of gas since the gas gauge didn’t work). The car had both 6-volt and 12-volt wiring. Boy did that 6-volt starter whine with a 12-volt battery (the starter did last for about 8 years though). When my oldest brother saw her he immediately wanted to buy her from me. I said no way since he had had a brand new one and didn’t keep it and I told him that I would never sell my car.

When one of my other brothers saw her, he called her “Myrtle with the girdle” because of the chrome strip going over the top of the car (the crown). Well her name stuck and we all call her “Myrt”. I drove around in Myrt so proud and felt I was on top of the world, what a fun car! She was always beautiful to me even when she wasn’t in the best shape (still got lots of looks and people wanting to buy her from me).

I got married and had my daughter and son so of course I had to have metal plates added to the back-seat floorboards so they wouldn’t fall through and also had seat belts installed to keep them safe while we were hot rodding around. I would never have guessed at that time that I would need the seat belts to be racing her down the quarter-mile strip at Bandimere Speedway some 20 years later. My husband always said I would get rid of him before I would ever get rid of my car. He was right!

I enjoyed driving my car every day to work but, as always seems to happen, good things have to come to an end. I had stopped at the grocery store near my home and when I came out of the store, someone had taken my Crown Victoria scripts off my car with a screwdriver (three marks in the paint on both sides where they had popped them off). I was devastated! I was so angry that someone would steal parts off her that I bought another car to drive to work so she could be kept safe in the garage; which was a real shame because I loved driving her so much but wasn’t about to take a chance of something else happening to her.

My son (who was drag racing at the high school events) told me that they were starting a new club clash race and since I didn’t drive my car every day anymore and liked to hot rod I should try it. He said it didn’t matter how fast the car was just as long as it was consistent. I took Myrt up to Bandimere Speedway and as I was waiting in line with all the high-powered loud cars and young people, I wondered what in the world was I doing up there. When it was finally my turn to race, the lights on the racing tree came down, I got the green light, pushed the gas pedal to the floor, and squealed off down the track. What a kick and I was hooked! It is so much fun and legal too! That was the start of my 33 years of drag racing the quarter mile and winning a few trophies. I really get to enjoy driving her again going up to the track, racing, and driving back home.

I had Myrt semi-restored over 28 years ago and she still looks great going down the track! My grandkids started racing her when they were in high school and love the car almost as much as I do. Not very many people can say they still have their first car but, for me, it truly was love at first sight!