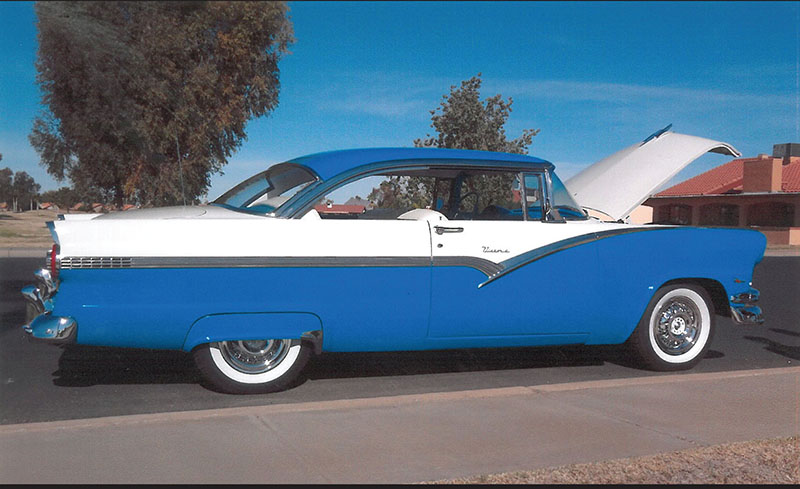 By Don and Bev Locke

While the majority of CVA members live in colder climates and are putting their cars down for a winter’s nap, we in Arizona enjoy driving our cars and going to car shows and parades from October through May. Beverly and I have the opportunity to show “Vic” almost every weekend and enjoy meeting people who share our love of old cars. We have become more selective over the years and generally try to participate in car shows that raise funds for worthy local charitable organizations.

Since 2005, we have attended local car shows at least monthly. During that time, we have made many friends, most of whom have cars that are NOT Fords! We have come to the conclusion that there are not many 54-56 Fords in our area. During the multiple January car auctions (Barrett Jackson, Russo Steele, Silver and Biltmore) more than 400 cars gather at the weekly, longest continuously operated free show in Arizona at Scottsdale Pavilions McDonalds restaurant. We have won tickets to Russo Steele and $100 favorite car prizes at this amazing Arizona extravaganza. Quite a happening! If you are in our wonderful state for a winter break, try to spend a few hours on a Saturday at Indian Bend and the 101 freeway; it is a car lover’s paradise.

Every year, we have an overabundance of delicious pink grapefruit from our small grove. We do not want to throw the fruit away, but there is so much excess fruit in our community that we cannot give them away. Our solution was to take a large box of grapefruit to car shows and give them away. We had few takers until a friend suggested that we offer the recipe for Pink Grapefruit Margaritas and Salty Dogs (made with grapefruit juice) along with the fruit. Problem solved! More than 50 disappear in half an hour. Now when visitors see our peacock and cream ’56 Victoria at car shows, they come for the grapefruit and a visit, not to see the car.

Most folks who attend car shows are truly interested and ask questions about the history of the car, its horsepower, accessories and interior. We keep cards for the various shops that have worked on the car and advertise for them. The most unusual question we have ever had is a woman who asked my wife “How many children do you think were conceived in the back seat of this car?” She replied, “None of ours.” Another time, a woman walked up to me and said she had a car just like ours and followed me around chatting about her car. Then her husband appeared, and she said, “Look, a car just like ours.” He said, “Yes, dear, but we had a Chevrolet!”

We have a life size cowboy doll called Little Vic who stands against the front fender and hides his face. A girl about 3 walked around and around the car, watching Little Vic; she finally asked me “Why are you punishing your little boy?” Her mother stood by laughing, then showed her that Little Vic is just a doll. Of course, she wanted to take him home, cap pistols and all. Another little girl said, “Wow! This is quite a car party.” We love chatting with the kids who come to shows with their parents, they always provide a different perspective on our hobby.

Our car is often a prize winner and has taken Best in Show or First Place six times. We were featured on local television three years ago during the Chandler Old Town celebration. “Vic” was on the cover of the April 2012 CVA news and featured again in the 2017 Blast from the Past edition. Yes, we are getting older, don’t drive as much, but “Vic” doesn’t age, just gets better!