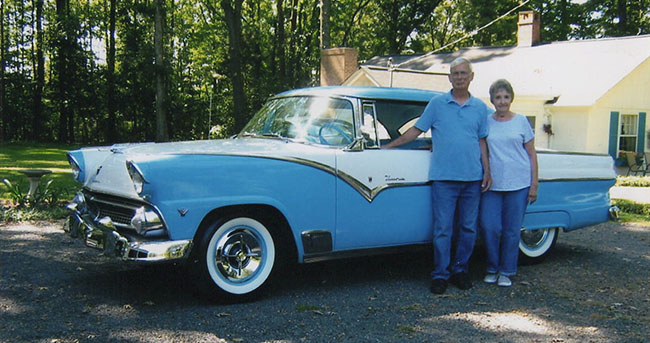 Editor’s Note: James and Sandra Pope are new members. Welcome to the Club!

James Pope recently restored a 1955 Ford Victoria that he purchased from the original owner, Ray Welch. Ray was the owner of “Roy’s Gulf) at the corner of Mint Street and Summit Avenue in Charlotte, North Carolina.

This car has special meaning for James because he remembers the day it was bought. It was around Christmas of 1954. His dad had purchased one like it at the same time. You could often see the two cars parked together at ‘Roy’s Gulf’. James’ dad worked across the street from the station.

After being parked in the garage at home for forty years, it has finally been restored. It has had some extensive body and paint work completed, as well as a complete new interior kit that we purchased from Mac’s. It has a 272-automatic engine that has 74,000 original miles.

James has taken it to two car shows and is looking forward to many more!