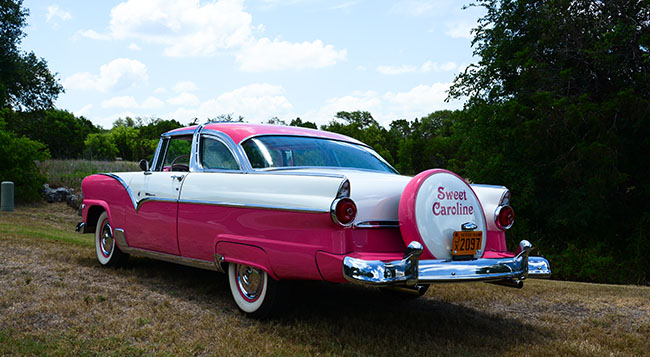 Back in my high school days in Dallas, there were only three things that interested the guys- - football, girlfriends and cars, and not necessarily in that order.  Concerning cars, one of the rich kids came to school in a gorgeous deep triple black Crown Victoria with red and white interior, sparkling chrome and shimmering stainless steel that festooned the chariot, dual rear antennas, fender skirts, “flipper caps” and a continental kit.  The sound of the rumbling V8 with dual glass packs was pure music!  It was love at first sight!  However, it would be many moons until September 2013 before I fulfilled my high school dream and bought my 1955 Crown Victoria.

After negotiating on the phone for weeks and receiving lots of photos from the seller, we closed the deal.  My brother, Gary, and I drove up to the Texas Panhandl e to bring the car back to Austin. I thought this would be a quick, relatively inexpensive restoration (wrong!) since it had a “new” paint job that was seven years old, but the car had never been reassembled or driven after painting.  The car also had a new, correct ABC Interiors upholstery kit that was partially installed.  Importantly, the body was in good shape with no rust.

We quickly determined that only a few parts to the mostly disassembled Crown Vic had been segregated, bagged and tagged.  Almost all of the stainless trim, the bumpers and grille were off.  Significantly, a large number of parts, fasteners of all types, etc., could not be located.  After hours of searching, we found some of the missing parts interspersed unmarked in the garage among parts of several other cars that were being restored.

When it came time to load the car onto the trailer the real fun began.  The engine was difficult to start and stopped repeatedly.  The brakes and parking brake were stuck as a result of the car sitting idle for years.  It was very difficult to move the car and drive it onto the trailer.  But we finally finished the task and headed for Austin. Once home, I gave the car a thorough going-over.  It became apparent that I had overestimated the condition of the car, and that it was going to take a lot more time and treasure to restore it to the level that I wanted.  But I knew this car had good “bones” and would be beautiful when finished.

My objective was to build a long distance driver, not a show car that sat unused in my garage.  And I wanted a top quality restoration.  Although I enjoy working on my cars, I recognize my limitations.  When it comes to advanced auto mechanics, electrical, bodywork and painting, I leave those tasks to the real experts who have honed their professional skills over many years.

Gary and I removed all of the trashed brake system and replaced it with new components, brake lines and master cylinder. Tip: Pre-formed steel brake lines are difficult to impossible to install in frame-on restorations due to chassis/body restrictions!

Almost all of the heater system was missing and had to be replaced piece by piece.  I could not believe how many parts comprised the heating system, and how much time and money it took to collect the parts and install them.

A shop experienced in rebuilding Ford Y-block engines handled the work on the V8 272 engine.    Surprise!  The crankshaft had been welded together, and the block had been bored .060, indicating at least one and possibly two rebuilds. But the block checked out strong so we pressed on.  I switched the original two barrel carburetor to a new Holley 390 four barrel carburetor, gaining 20 horsepower in the process.  After many fits and starts getting the carburetor to work properly, the car now cruises like a top at modern highway speeds.

While the engine was being rebuilt and balanced, the restoration shop rewired the electrical system and cleaned up the wiring under the hood.  In the process they converted the electrical system from 6 volt to 12 volt without my approval.  My first clue as to the change was a bill for a 12v heater motor. This was especially unfathomable since they had already rebuilt the 6v starter and generator as a 6v, the many electrical components I had provided to them were 6v, and the original 6v tube radio had been restored.

So why the error, I asked? The response was a weak “well, we talked about it.”  I was not a happy camper.  Long story short, for a variety of reasons I now have a 12v car, with the relevant components being re-rebuilt or replaced as 12v.  I purchased a second 1955 Ford 6v radio and had it converted to 12v with new modern components, boxed the original restored 6v radio and put it on the shelf.  I’m still working through the electrical gremlins that never seem to get fixed permanently, especially the dash gauges - - pesky little devils are they.  You can never have too many electrical grounds!

While the engine was out, the engine bay was cleaned up and painted.  The radiator was recored and dents removed.  The transmission and third member were refreshed.  The steering box was sloppy, so it was rebuilt.  Ditto the tired front suspension system, which was replaced.  Since the car had its original gas tank and had been sitting for years, I replaced the gas tank and fuel lines.  I didn’t want the old fuel system possibly contaminating a newly rebuilt engine.  At this point, I was getting depressed since I had invested a lot of money in the restoration, but you could not see the results because the costs were under the car and hood.  My banker and I are becoming friends.

Next in line were new Bilstein Classic shocks specifically designed for classic cars.  They cost a bit more, but are great!  When the car was on the lift for installation of the shocks, a friend noted that there were two brands of rear springs, one with 5 leafs (leaves?), and the other with 6 leafs and one of the springs broken. Hmmm.  Maybe this is why the car listed to starboard slightly.

Obviously, this necessitated new rear springs. I opted for Posey springs, which have Teflon between the leafs and are quieter than normal springs. I selected heavy duty springs to level the car due to the weight of my continental kit.  They also stabilize the car nicely, much better than standard springs. A MagnaFlow stainless steel exhaust system with dual mufflers was installed.  Love the deep, throaty ‘50s sound of those mufflers!!

In the spring of 2014, I began the process of having the gazillion pieces of stainless trim restored or replaced.  I was very fortunate in locating a real expert in stainless steel restoration, Mickey Greer, to do the heavy lifting.  Turns out, he lives a few blocks from me.  We became very close friends during the restoration process, which took over a year because Mickey’s skills are in high demand.  Building such friendships is one of the great benefits of our avocation.

Although the paint looked good from 15-20 feet, closer examination revealed many flaws.  I turned the car over to a body and paint shop to do their magic.  Originally, I was just going to have minor body work done and touch up paint applied.  However, when the Tropical Rose paint was mixed to original Ford specifications, the color was noticeably different than the color on the car.  This necessitated a complete repaint of the car, interior as well as exterior.  Once the old paint was removed, additional bodywork was required to get the body sides arrow straight.  The front and rear windows were removed so the original rock-hard rubber seals could be replaced, and the window channels checked for rust (none!) before painting.

With the body and paint work completed, I began the tedious process of installing all of the stainless trim, chrome bumpers, emblems, and grille began.  Installing many of the trim clips for the exterior stainless mouldings from inside the doors and rear seat area requires being a masochist and contortionist.  Finally, the car was coming together!

Before installing the upholstery, carpets and finishing out the interior, I installed Dynamat sound deadener, followed by thick acoustic insulation matting.  I also installed sound deadener in the trunk and inside the doors and rear seat window areas to reduce road noise.

Once I had the car back on the road, I was concerned with the lack of performance in the car, which I attributed to the differential gears.  During the course of the rebuild, one of the shops determined that the car had been converted from the original Ford–O-Matic to a three speed manual. However, upon further inspection, the differential gears had not been changed.  I obtained a replacement third member, gears and axle from CVA member Don Stickler. The performance of the car improved significantly.  Don was instrumental in providing a wide range of parts and wise counsel in helping me throughout my build of the car.  He was my go-to guy for everything that was not available through the aftermarket suppliers.

“Sweet Caroline” has Firestone 6.70 x 15 whitewall tubeless bias-ply dancing shoes.  I preferred radial tires, but opted for originality and a true ‘50s ride.  I laughed once when I saw a photo of a Crown Vic with a continental kit, trunk lid up, and a second spare tire in the trunk.  Why would anyone want the extra weight of a spare tire in addition to the continental kit?

Months later, I wrestled unsuccessfully for several hours attempting to get the ring and disk over my mounted spare tire without bending the steel ring or damaging the disk.  After reaching my patience point, I took the car, ring and disk to the body shop, where three men also wrestled with it for over an hour before successfully completing the installation. I felt vindicated!  Murphy’s Law dictates that if I have a flat tire, it will occur on a frigid, wet, moonless winter night in the middle of nowhere. The wisdom of a spare tire in the trunk became immediately apparent.

The rebuilding of my Crown Vic was basically completed in early summer 2016.  Since then, she has been a regular participant in car shows and cruises, garnering more than her fair share of trophies.  She is a crowd favorite, with admiring folks asking lots of questions, which I enjoy answering. But the real pleasure is driving the car regularly. “Sweet Caroline” loves the road!

What were some lessons learned?  First, I found it important to keep a sense of humor and perspective.  Restoring old cars is a long journey and there are many bumps along the way.  Find tradesmen and craftsmen that you can trust, because the caveat emptor principle applies.  Develop a network of suppliers of original parts, and determine which businesses sell quality aftermarket parts.

A special thanks goes to my brother, Gary, who is the proud owner of two Studebakers.  I simply could not have rebuilt this beautiful car without his assistance.  For three years, he beat the highways back and forth from North Texas to Austin to help me.  Thank you, Gary!

Finally, when I was in high school, many of the guys named their cars for girls and rock ‘n roll songs. I have continued that tradition.  “Susie Q”, my restored 1956 Chevy pickup, is named for my wife.

“Sweet Caroline” is named for my precious 11 year old granddaughter, a happy-go-lucky child with an inquisitive mind, a warm heart and a bright smile who lights up the room.  Caroline started with me on this restoration venture when she was 8 years old, and I promised her the first passenger ride when it was completed.  She waited patiently for me to finish this challenging project.  Understandably, after a few years she kept pressing me with “Pop, when are you ever going to finish “Sweet Caroline” so I can take my ride?”  MISSION ACCOMPLISHED!!