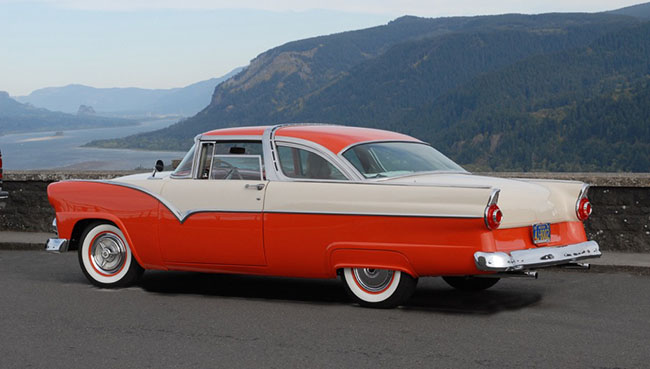 In the summer of ’09, I was between hot rods and keeping a daily watch on HotRodHotLine.com, when I saw this really beautiful ’55 Ford Crown Victoria for sale in the Dallas, Texas area.  A quick look at my mileage plus put me in the SW of the U.S. in a matter of days.  Arriving at the owner’s home, I saw the car under a carport, and knew I had to use my poker face on this one, because it was going to a new home.  Owner/builder James Moore in Arlington, Texas had done a very nice job of not only building a stout car mechanically, but had done just the right amount of do-dad removal to make a nice mild custom.  He had started with a local unrestored original ’55 Ford Crown, and totally took it apart for a rotisserie build.  The chassis was upgraded with 5.0 fuel injected Mustang power backed by a Ford AOD transmission and 8” Ford rear axle with tall gears.

Granada dropped spindles and power disc brakes round out the front with KYB shocks.  After I purchased the car, it went to Rich Hoak, just outside of Portland, for a power rack and pinion steering unit consisting of a ’89-’93 Chevy rack utilizing a FATMAN cross member.  Rich also made one off sway bars for the front and rear.  The car now tracks like a Mustang, changing the attitude a ton from the stock ride. I also spent a day with Mitch Kim of Portland. He is a master pin striper, and a winner of the VonDutch award given at the Grand National Roadster Show. With the body stripped, and the holes filled left by the ornament removal, James sprayed it with Competition Orange and Alabaster White base coat/clear coat paint.  The trunk is opened with an electric switch backed by a mechanical pull inside, and two speed electric wipers rounding out the upgrades from stock. Besides restoring all the stainless, and adding new pieces where needed, James placed extra gauges in the dash for oil pressure and water temp. He also added the original NOS ’65 Mustang air conditioning under the dash and installed ’56 Ford taillights.   Rolling on original steel wheels and white wall tires from Diamond Back, the Vicki headed for Fort Worth, Texas to Fuller’s Auto Upholstery for a matching custom interior. When I bought the car back in 2016, it returned with 15” Murac ll wheels and P205/60 R-15 and P215/65 R15 Pirelli tires.

My plan is to return it to that look. I am really glad I had the opportunity to have this car back in my 1940 garage. It just barely fits, but it is home again.  Having started in ’61 with a custom ’55 Ford Tudor in Massachusetts as my first car, it is only fitting that I do a little time travel and have another ’55 Ford.