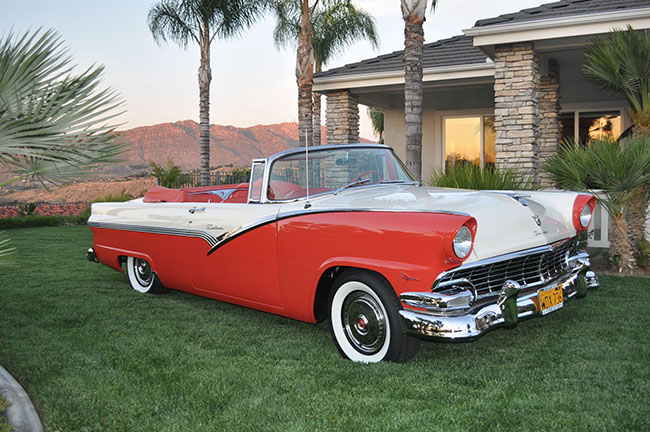 My long term interest in mid-1950’s Fords stems from growing up with these cars as my parents liked Ford products. My dad was in sales for the Johnson Wax Company and was supplied a steady stream of company cars which he was allowed to select, and were mostly Fords.

My parents purchased a 1956 Sunliner convertible from Hertz Rental Cars in 1958 when I was 1 year old. They had owned several British sports cars such a MG TD and a Triumph TR2, but decided that they needed a bigger car for a family. The Sunliner was purchased to have a fun car that would carry more passengers than the small sports cars.

The car that my parents had a 312 V8, automatic transmission, power steering, and a radio.

The car was used by my parents daily until the late 60’s and finally in 1971 it was sold for $125.00! This was a California car with no rust, everything worked, and had about 60,000 miles. It was just an old car at the time with not much value to it. Compare the 1971 sales price to the current cost to re-chrome the front turn signal housings at a cost of $800.00. Prices have gone up.

My interest in the cars continued and finally in 2008 I decided to take the time and money to purchase a Sunliner myself.

Even though I am located in Southern California, often referred the car capital, finding a Sunliner to buy locally proved to be difficult. Finally I found a car in Hemmings that was located in Boston. I hired a car inspector and then made the purchase and had the car shipped to my home in Riverside, California. The car came with a 292 V8, automatic transmission, power steering, and a radio and heater. The car was the same colors as the one I grew up with which was Fiesta Red and Colonial white.

Based on the serial number the car I purchased was the 500th Fairlane car built for 1956. Opinions differ but it appears that this car was built on the first day of production.

I knew the car needed work and planned on restoring the car. As a real estate broker who focuses on corporate home sellers, I was extremely busy with the ongoing foreclosure crisis. Also, my late wife Vicki was in declining health which also took a great deal of time. I drove the car and went to car shows with the car and had fun with it, but my goal was to restore the car. I added front disk brakes, a power brake booster and radial tires so that the car would be safe to drive in Southern California traffic.

In late 2009 my wife Vicki died which of course was a disaster. Shortly after her death I decided to push getting the car restored. I needed something to focus on in my free time that was a worthwhile project. Finding competent and efficient car restoration people I found to be a dilemma. The car restoration business is filled with many incompetent “experts” and those with no business skills. I finally found a good restorer who picked up the car and started working on it. Once the car was disassembled and the paint removed a large amount of prior poor quality body work was discovered along with rust problems. A donor car was purchased which provided replacement floor panels, rear quarter panels and several other parts for the Sunliner. Frame repairs were also involved. While the body work was being done the engine and automatic transmission were rebuilt. The original engine went from a 292 to a 312. The wiring harness was replaced. The gauges were rebuilt along with the front end. All areas of the car were restored with new or rebuilt parts. The colors were reversed, with the Fiesta Red now on the lower body panels.

The restoration work was done well but the process was slow. Also slowing the process down was my desire to really have a nice car which meant often times finding better parts than the car had. Most parts chasing I handled along with the plating and polishing, in other words I would take parts to the platers and polisher myself to save time.

During this time the interior was reupholstered using LeBaron Booney materials. The dash is completely stock with no add on gauges. Carpeting was added, as there is no replacement for the original rubber mat.

The Coker tires that I put on the car when I first bought it were getting old so they were replaced; this time with BF Goodrich Silvertown radials. The original wheels were in rough shape so new wheels were purchased from The Wheelsmith Company. The wheels are copies of the original wheels but are welded and are much stronger than the stock wheels. The combination of the radial tires on new wheels really helps the handling of the car. This is of course very important in busy Southern California traffic. I know that the disk brakes, and the wheel and tire changes offends some purists, but I felt the upgrades were critical if the car was going to be driven safely on Southern California freeways.

The first restorer had the car about 3 years, once we were at the final assembly point and making the car drive again a second restorer assumed most of the tasks as the process was taking too long. After about 5 years the car was finally done. However one large hassle was getting the convertible top looking good and working properly. Replacement top parts were often needed, some original parts needed repaired. I remember this process taking many months. Another problem was the rear end. The current gearing appeared to be for a truck rear end. With the help of Don Stickler I located someone in Southern California who had the proper gears which were greatly needed. Another excellent source of information and parts has been Don Simpkins.

Driving the car again was a thrill as the car drives and looks good. The car has been to a number of shows and won several awards at high end car shows Southern California car shows. Many of those whom I have met at car shows have never seen a Sunliner and are often excited to see the car. Many ask to take photos with the car. At the Greystone Mansion Concurs De Elegance in Beverly Hills, even Jay Leno stopped by to admire the car. Jay himself drove a Duesenberg to the show.

During the process of the Sunliner I remarried. I have been impressed with my wife Susan as she actually knows what various parts under the hood of a car are and can tolerate my car hobby. She has owned several iconic cars herself. I know she would rather be shopping in Newport Beach than at a car show, but she does go to some of the car shows with me.

I also own a 1956 Club Sedan which is a very good car and has been featured in Fomoco Times. I recently sold a ‘55 Crown Victoria which was a good driver. I decided that I prefer the changes made for the 1956 over model year 1955 so when I restore another car I want to have one that I really have a passion for. I also have a ‘67 Ford Ranchero which is a nice car.

My hope is to someday bring the Sunliner to the Crown Victoria show which would not be an easy task due to distance and time. If anyone for the Club is in California, feel free to look me up.

This email address is being protected from spambots. You need JavaScript enabled to view it.