Back in 1996 my wife Patti and I decided to purchase a classic car. We had a difference of opinion about what we wanted to buy. I, myself, wanted a 1955 Ford Crown Victoria while Patti was looking forward to buying a '55 Ford Sunliner. Saturday evening came and we decided to go to Macungie, PA. where The Wheels of Time Car Club was holding their monthly cruise. Strolling along we didn't see any Crowns for sale but Patti spotted a red and white Sunliner and on the front seat laid a sign, ' For Sale '. To be honest I did not pay much attention to that car because I wanted a Crown but that wasn't what was going on in Patti's head. We left the park and went home.

Monday morning came and I called a friend of mine, Tommy, who owned a motorcycle shop and he told me about a customer of his that not only had a Crown Glass top but also a Sunliner and one of them was for sale, but he didn't know which. He gave me the man's phone number, I called and made an appointment to see the cars. Well Tommy was right but the man was in no way interested in selling the Crown but the Sunliner was up for grabs. To my amazement, it was the Macungie '55. I brought my friend Bill, a very knowledgeable car guy with me, to access the vehicle. We looked it over, I took it for a test drive and found some problems with the car. We left and on the drive home Bill and I discussed the car and what we had found wrong, Bill suggested I bypass this Sunliner but I thought I owed it to Patti to at least let her look at the car. I should have taken Bill's advice, Tuesday morning came and with Patti in tow, we went to Rich's house to see the Sunliner. To my wife, it was instant love, to me, it was a nightmare about to happen. We could not come to terms on the money and as we were leaving I asked Patti what did she want to do. She asked if I still wanted a Crown and I replied that I would wait it out if this was the car that she really wanted. Well, unfortunately for me, that was the wrong question and answer for she turned around, went back into the house and plunked down the money and we were now the owners of a 1955 Torch Red/Snowshoe White Fairlane Sunliner convertible.

The following Saturday evening after getting a friend to put an inspection sticker and tags on her, we attended a car show and PRTLDY, as she would get to be known, won her first trophy. The Sunliner's paint was not bad, Torch Red & Snowshoe White in color she looked decent. Her interior was another story however. It was custom made and didn't have any arm rests, not too bad. It would have to do because she had mechanical problems that needed attention first. The suspension, ball joints and other stuff had to be replaced. The steering wheel bearing was rusted fast and had to be redone etc. Rather than go through the entire 20 year rebuild of PRTILDY, by year, I'll just tell you all that has been done. 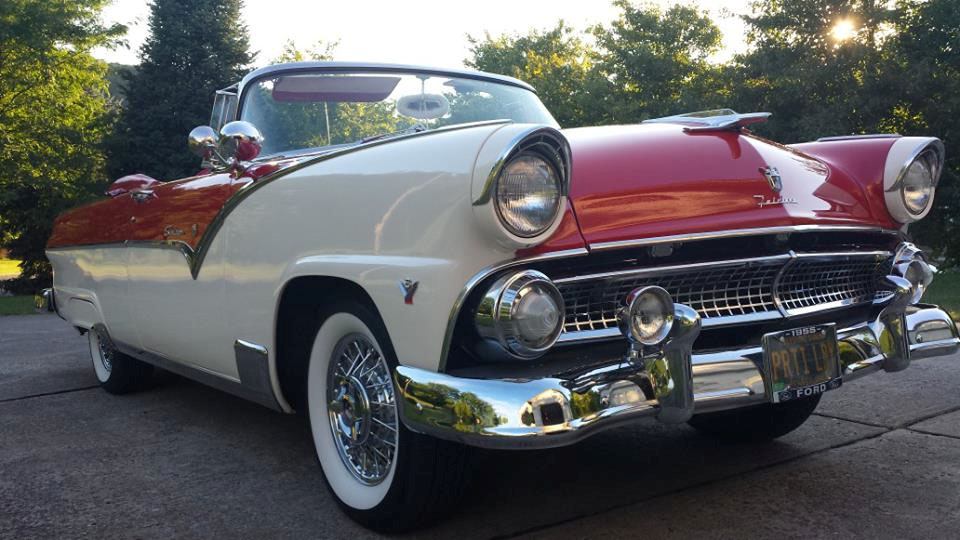 I will start off with the pre-2009 Sunliner for in 2009 PRTILDY underwent a complete redo. The Lady did not have a stock engine. The Sunliners 272 motor was replaced, by whomever, with a 1973 Mustang 302 engine. Unfortunately, it developed a bad wrist pin. We pulled the engine, giving it a complete overhaul, she was bored out, a Mallory Electronic ignition was installed with an Edelbrock High performance 4 Barrel carb and a new manifold. The Sunliner also had a 1973 Mustang C4, 3 speed automatic transmission and a 1978 Granada rear end and then the trans decided to go south. Rather than rebuild the trans I opted for a new one instead. Nothing stock about this '55. At this point in time I concluded that this particular vehicle was put together in a Midwest junkyard for resale to some unsuspecting person, namely me. Next came a transmission cooler. The interior was replaced with a correct ABC interior and armrests. We found the top to be the wrong one also, so we installed a new vinyl top with the correct rear window. New top motor/top cylinders completed the top work along with all new top seals. This rebuild was starting to drain my wallet. My wife was threatening me and I had to remind her that this was indeed HER car and NOT mine. I always loved the look of a continental kit so the next thing was a Continental Enterprises continental kit complete with new rear chrome bumper extensions. I found a set of NOS spotlights and had them installed. PRTILDY was starting to look like a Princess now. I decided I wanted the custom look, so next came '56 Old’s Fiesta Spinner hubcaps & Mercury Turnpike cruiser skirts. lookin' good. New AM/FM radio with a cassette player and stereo speakers under the dash mounted on the side panels. Sounding good. I got sentimental and added an airbrushed picture of my wife Patti on the conney face plate and had it lettered ' Ron's Pretty Lady ' PRTILDY now has two face plates which I switch around very carefully depending on the show. The 1st is Patti's flat faceplate, the 2nd, an open doughnut fitted on a Kelsey Hayes wire wheel with a center Ford knockoff. I had removed the Old’s Fiestas sometime later and replaced them with original 1963 Thunderbird Kelsey Hayes wire wheels with Ford knockoffs, including the continental all around, mounted on Coker white sidewall radial tires This is pretty much the way the Lady stayed until the next rebuild in 2009.

In 2009 PRTILDY had a slight accident. After working on the engine, Marc took her out for a test drive and the hood came up & bent itself. Luckily no one was injured. It was an accident and Marc {Marc & Johnny of Marc's Auto are the only ones I allow to work on that '55] replaced the hood but it was impossible to match the old Torch Red paint so I looked at the budget and decided, what the hell, let’s go for broke. I took the '55 to Force 1 Auto Body. They had a really good reputation and did excellent body work. Amazingly, the only rust that they found were two 3" spots in the rocker panels which they replaced with metal and also filled the antenna hole on the front fender. No bondo going on this gal. Force 1 took the car down to bare metal and found the original body was all Torch Red. I never looked at the data plate. A new cross member was installed because the old one was going bad. Everything that could be replaced chrome wise was, [ Ellis from Tee Bird Products in Exton, PA was a tremendous help] except the grill, bumpers and side trim and rear fender top trim. All the stainless pieces were polished and in excellent condition. Engine chrome was added but just the right amount for too much chrome looks gaudy in an engine compartment in my opinion. New chrome rocker panel covers, fender skirt trim. front fender stone guards, dual rear antennas. the passenger side being custom made matching the driver’s side. New fender skirts, NOS fog/running lights. The Lady won Best of Show a few days after coming out of the body shop. Roger, Jeff and David's hard work at Force 1 really showcased their talent. I decided to take a break for my wife hired a lawyer (HA HA ) and I had to remind her again that PRTILDY was HER car, NOT mine.

In 2012 the restoration was well underway. A new black Hartzz Stayfast canvas top was installed. Something that I always desired but couldn't find, I found. From Butch's Swap & Sell I purchased a pair of completely redone 1955 Mercury Station Wagon taillights, rechromed by Qualquam chrome in Ohio. Better than new, triple chrome plated, new lens etc. Well worth the $1500 purchase price. Really set her rear end off. BEAUTIFUL A completely new custom interior [ installed by Dave Synder] from LeBaron Bonney in red over 1" white pleats, everything else dyed [ by my cousin Jason Nederostek ] in a slightly different red for a two-tone red color/white interior. Autometer gauges, a Forever Sharp 14'' custom dyed steering wheel & a new AM/FM MPC IPOD cassette radio, installed in the glove compartment with the stereo speakers replacing the in dash top mono speaker [ The IPOD has 1000, yes 1000, 50s/60s songs so my wife can listen to her favorite Lost In The 50s, ' To Know Him Is To Love Him ' by The Teddybears crusing song ] an NOS Ford tissue dispenser, a custom dyed Drinkster front floor console, complete with the MACK Bulldog [ I retired from Mack ] along with a custom dyed rear seat Drinkster cup/armrest console, ala the Crown Vics.The final touches, a custom dyed convertible top boot and Ford front and rear floor mats plus front and rear seat belts. O yeah, I had to rebuild that trans again, the Lady was fighting me, A custom built Ford Bronco Saginaw power steering unit was installed along with a dual diaphragm power brake unit with a dual master cylinder. Wilwood front disc/rear drum power brakes. Dual Mercury voltage dash regulators, a 25" electric vacuum pump mounted up next to the radiator to handle those big Wilwood Discs. Ford 15" vacuum, not enough there for those big discs. Completely rewired dash. New Gabriel heavy duty front shocks with 200 Lb. rear air shocks to handle the continentals extra weight plus new rear springs, shackles, U bolts. Cats eyes and door handle fingernail scratch guards. I also added a dancing light system installed under the car for an eight LED color light display for night shows to complete the build. Patti, you can call off the lawyer, I have news for you, PRTILDY is OUR car NOT just yours anymore. That's it ladies & gentlemen, the story of a junkyard doll that first became a Princess and was finally reborn a Queen, our PRTILDY, aka ' Ron's Pretty Lady ' 20 years, $60,000 +, of my life. I hope you enjoyed the story.