Growing up in Wisconsin I don’t remember a time when dad didn’t talk about his Fifty-Five. I knew the story, from an early age, of how he’d come to own it, how he’d spent the entirety of his savings account in 1963 to buy it, and how grandma had pitched a fit. 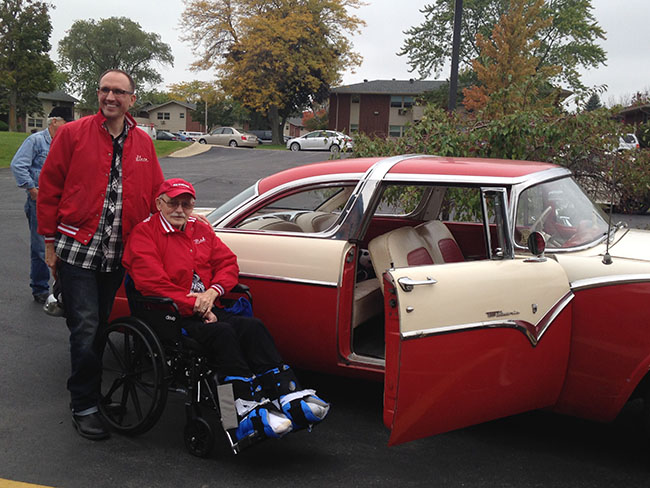 It was part of my upbringing to be able to identify any old Ford (actually any old car, but of course Fords were the priority) that we might pass on the road or at a show. The times when I’d get it wrong, dad would give me the business and I didn’t like it one bit. So when I’d come home, I’d comb through my collection of car books until I found the car in question and memorize the cosmetic markings specific to the year in question waiting for the chance to show dad what I’d learned. I never received a report card, but dad hasn’t had to correct me in quite a few years.

As the years went on I learned one indisputable fact, there has NEVER been and NEVER will be a more beautiful car than a red and white 1955 Ford Fairlane Crown Victoria. You all are invited to try and change his mind.

Like many, dad’s dream of one day treating the carriage that he and mom had first dated in to a full frame-off restoration took a backseat to day-to-day life. Mom and he helped get my sister and I through our bachelor degrees, paid off the house and of course kept food on the table and saved for the future. Over the years we’d pick up NOS parts at swap meets and talk about what had become our shared, but all but dead, dream.

I don’t think my dream to one day surprise my dad with a fully restored car is unique to me, but I never thought I’d actually get the chance to actually live any part of that dream.

In 2013 dad had the first of several strokes that have increasingly debilitated him. It was in 2013 that I came up with the idea of getting dad’s Crown back on the road. Logistic were against us, I live in NYC and the car lives in Wisconsin. I’d need a mechanic, and every thing else in between. I kind of viewed my idea as a bit crazy and dismissed it. Even now, mom wanted to have me checked out. But like I told mom when I called to ask if I could go ahead with the project, “Don’t worry mom, we’ll figure it out.”

In the summer of 2016 I put feelers out to find a mechanic to work on my 1969 Torino. On recommendation of our handyman, I agreed to meet his mechanic on my July trip home to discuss rebuilding the engine on my Torino. I had been prompted by the loss of storage for my parts car. Of course when I showed him my car, dad’s car was there sitting in the next stall. Off handily, thinking there was too much too do, I asked him if there was anything we could do for dad’s car. Before I could finish my question, Bruce, our mechanic, interrupted and said sure we can get it ‘Road Worthy’, but not until September. My response was “Sounds good. “

September 9th, , my next trip home, the car was picked up by flat bed truck, not having left storage since 1971. I kissed the car goodbye and hoped for the best. I watched the truck drive away over the hill on our street realizing only then that I’d just let a complete stranger with no I.D. or question take away dad’s baby. Thankfully car guys are honest.

I flew into Milwaukee the week before the big reveal on a Friday night. The first order of business was a trip to the mechanics on Saturday morning to see the car. I couldn’t resist when he said go ahead and take her for a spin. I can report that at 75mph she handles like a dream. Thankfully on that particular day the police weren’t readily enforcing the ‘suggested’ speed limit signs. My first ride ever in dad’s Crown was everything I’d ever imagined it would be. And now I understand why dad has always been in love with his fifty-five. I only wish he’d been able to be at my side.

On October 15th, with a team of family and friends solidly behind us, we surprised dad with his updated friend 45 years after they had to temporarily say goodbye . The day was nothing short of spectacular. Twenty-seven friends and family joined us and got to witness dad’s pure joy when his old friend rolled up in front of him. They recognized each other immediately. Though the head nurse had told us it wouldn’t be possible, we lifted dad out of his chair and into the front seat and treated him to a long overdue spin around the neighborhood. To help round out the event, we had a sculpted Crown-cake, served a lunch and made some memories to last a lifetime. The car’s seats are tired, paint isn’t perfect and the chrome and bumpers need to be redone, but that’s alright by me. Dad and I lived our dream. I don’t know if there’ll ever come a day that the smiles can be wiped from our faces?