Dick Price Jr. and his lovely wife Becky - (CVA#7327) have been CVA Members since December of 2006. Both Dick and Becky were born and raised right here in Wichita Kansas which is located in Lower Midwest Region of the CVA where Don Robertson is our representative. 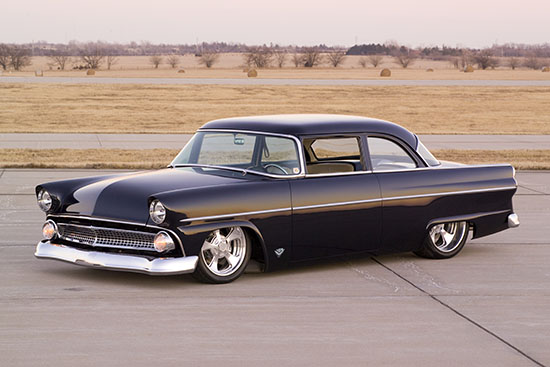 Dick began a 2 year build on his immaculate 1955 Customline in 2009. After a few months of work Dick had only one goal in mind and that was it must be finished by January 20th 2012 for the inaugural "Starbird-Devlin Cars for Charities" Rod and Custom show in Wichita Kansas. That mandate became a reality as this "Custom Customline's" interior was being finished literally as the car was being set up for that show as one of their 'Featured' automobiles. Dick Price Jr., who is President of Price Brothers Equipment Company here in Wichita Kansas, is on the board of the Starbird-Devlin Cars for Charities, which is a 501(c)3 charity benefitting Starkey Inc. and the ARC of Wichita, both programs designed to enrich the lives and to promote independence for individuals with intellectual disabilities. So, obviously it was imperative for this Cruiser to be in place at this "Wichita Tradition" of the newly named iconic and longest running indoor car show in the country under the new direction of Starbird-Devlin Rod & Custom Charities Car Show.

Before getting into the nuances of Dick's 'FRSTLUV' (as his specialized license plate shows) I need to give you a little background on the man who BLEEDS Ford Blue!

Dick Price Senior's father (Dick's grandfather) was an account who's failing eyesight was the beginning of 'Price Ford'. No longer able to see numbers as clearly as needed on a ledger he decided to begin selling Ford Model T's in 1916. Dick's father was an accomplished amateur golfer who had matches and held his own with the likes of Ben Hogan and Byron Nelson. Dick Price Sr. wanted to become a Pro golfer in the Forties. However, he was told by his father (Dicks Grandfather) that the game of golf was not exactly the way to raise a family and that he was going to sell cars - that was where the stable flow of money to support his family was going to come from. So, shortly after WW II 'Dick Price - Lincoln Mercury' was born and opened on the same block of South Topeka in Wichita Ks. as his father's 'Price Ford' was located. Ironically my own father purchased a brand new 1956 Custom Ranch Wagon from Price Ford in the same Diamond Blue as my '56 Sunliner.

Our Dick Price Jr. began working the lot in 1958 for what Dick remembers as .25 cents an hour. Dick purchased a slightly used '55 Customline and took it straight to a very young Daryl Starbird of 'Star Kustoms' right here in Wichita where it was Nosed, Decked and Pinstriped. This '55 was his First Love. 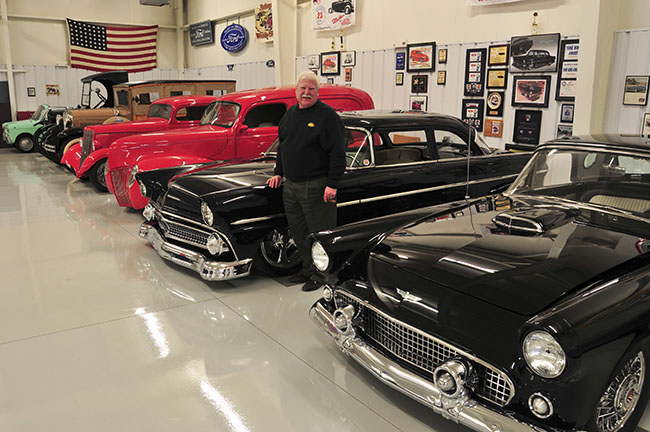 That car was subsequently sold so he could build a '32 two door hot rod. After graduating High School in 1961 Dick enrolled at Kansas University where he was an ROTC candidate for officers training. Then the conflicts of Southeast Asia arose and Dick took on the responsibilities of being a U S Army Captain in Viet Nam as a MACV AVRN recon Company (Military Assistant Command-Vietnam - Army of the Republic of Viet Nam) from 1966-1968. After an honorable discharge from the Army, he married his High School sweetheart Becky in February of 1968.

Now, since I am sure most of you have already seen the pictures attached to this article and are really dying to read about how this car came to be; so let's get started.

Dick spotted an exact copy of his First love for sale in 2006 while reading the NSRA magazine 'Street Scene' - an original owner with only 30,000 miles. After talking to the owner Dick told him that he would buy it if was everything the owner told him about it was true. The deal was struck, the car was as described and Mr. Price brought it back to Wichita and began the thought process of just how he could make this "one of 236,575 Customline 2 door hardtops" that rolled off the production line look different but still able to keep its distinctive lines virtually intact.

Dick just decided to "blow it apart" and rebuild it from the ground up. He needed a Custom shop which had a team that he could trust with such a project. He decided on a relatively new comer to the Rod and Custom business who had the skills and vision to undertake such a project. That person was Tim Devlin of 'Devlin Rod & Customs' who set up shop in January of 2005. Tim and his crew transformed the car into what you see in a professional and highly skilled manner.

After discussing the project thoroughly, the Devlin crew then began the disassembling of the various components and then removing the body, the frame was smoothed, filled and modified first by adding a Fat Man Mustang II frame stub with 2" dropped spindles and a Ride Tech Performance Suspension System. The frame was treated to a power rack and pinion steering system hooked into an Ididit tilt column with a 14" custom steering wheel. They narrowed the rear frame rails, fabricated a four link rear end, along with custom sway bars and adding all stainless fasteners and finished it off with Mercedes Brilliant Silver metallic paint.

After setting the body on the newly constructed frame, Dick expressed to Tim that it just did not have that 'look' which he had envisioned. After much discussion and careful planning, Tim's crew began the painstaking ordeal of chopping the top. Dick insisted that the rear window remain at its stock height which made the entire process even more difficult. It was decided to remove only 1 1/4 inches to obtain that perfect look, and you can see from the cover picture that the process was carried out to its fullest potential. Other mods to the body include a shaved hood, doors and trunk. A unique 'One piece' treatment to the side windows was carried off to give this Customline an even cleaner look. The body was sports narrowed and tucked bumpers, along with a 'Tubbed' rear end to accommodate the extra wide rear wheels and tires. The prerequisite '55 Mercury Station Wagon tail lights were added but only after Tim and his crew actually sunk them microscopically into the rear fenders because Dick did not want any gaskets showing on his finished project. The headlights were 'frenched' in and after countless other minor stylized modifications, the car was flawlessly finished in a Lexus 'Blue Onyx Pear Paint supplied by PPG.

Being a true Blue Oval Ford man the only choice for a power plant had to be a big block Ford. Dick purchased a 1969 429 and it was up to the Devlin crew to shoe horn into place. With nearly 600 horse power at their disposal they needed to rely on a heavy duty transmission and the Ford C6 was their first and only choice. That monstrous engine/transmission swap was skillfully achieved by setting the firewall back an inch and a half, and redoing the inner fenders.

Dick's 429 also sports a pair of Edelbrock 550 cfm carburetors, a Blue Thunder polished intake, cylinder heads and valve covers, A Billet Specialties Air Cleaner along with an AFCO aluminum radiator with a 16" electric fan and an MSD ignition system. The 10.5:1 compression monstrous 429 billows the exhaust out through a set of custom Ford power train applications headers which are attached to a Magnaflow performance stainless exhaust system. A Billet Specialties Tru Trac Serpentine system runs the polished Powermaster Alternator, Vintage Air/Heat compressor and the Edelbrock water pump.

Nationwide award winning and renowned Interior specialist Scott Downey was handed the task of stitching up the interior which was anchored by a set of 1966 Thunderbird seats front and rear. Devlin had supplied the car to Downey's Upholstery with a custom center console and a slightly forward slanting rear package tray. The seats, and door panels were covered in Cessna Citation Scottish leather. The interior was topped off with Classic instrument gauges all custom matched, and a set of custom machined Ford Y-Block V8 style A/C vents which were inserted in the console. A Secret Audio sound system is housed in the original glove box area and powers a set of Pioneer speakers. Blue wool carpeting completes this custom interior.

Dick Price Jr. became a member of the Crown Victoria Association in 2006 because of the recommendations of friends. He enjoys the FOMOCO times magazine, and still uses it to learn about other members along with the stories of their Fords, and the various tips which are presented monthly.