September 2016 - Thirty-Three Years in the Making: From Farm to Show 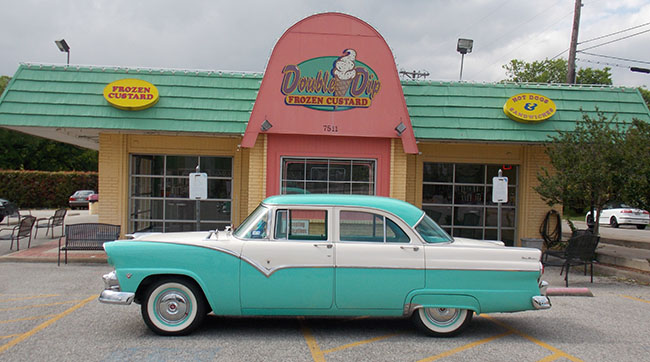 The mid-fifties was a tough time for a sandy land farm family to live in North Texas. Our income depended on a good crop of peanuts, and that always depended on the amount of rain we got that season. A successful crop meant more food on the table and new clothes for school. I graduated from high school in 1957 and went on to become the first sibling in our family of 4 kids to graduate from college, North Texas State University.

During the late ‘40’s our mode of transportation for our family of 6 was a Chevrolet 1/2 ton farm truck. Back then we kids were small, but it sure got crowded with all of us sitting in the cab of that truck! As my brother and I got older, we were delegated to the back of the truck which was not much fun when it rained or snowed! I also had to use a farm truck for the few dates I went on back in the mid ‘50’s. I had no money or time, for more serious dating.

I began my college experience two years after graduating from high school. I used those two years to grow up some, help my dad on the farm, and decide if I really wanted to be a farmer the rest of my life. Two more years of farming was enough to let me know I wanted to go another direction in life, so I enrolled in college. That meant I needed a car real fast! My dad did not want me to buy a car with dual exhaust, so I found a 1955 Ford Fairlane, four-door Sedan with a 272 V8 engine. It had a Fordamatic transmission and the speedometer showed 43,000 (143,000) miles. The cost for my wonderful car was $1,000 in 1959. It became a “fix or repair daily”! I added another 100,000 miles on the car going back and forth to college in Denton, and then to my first teaching job as high school shop teacher in Frisco, Texas. When I had made enough money to purchase another more reliable car, I gave the ’55 to my sister. She drove it to work in Dallas for two years driving 100 miles each day. She sold my first car for $50.00 as the reverse was out on the car.

Now let’s fast forward to 1977, and I found myself visiting my wife’s folks on a farm in Central Texas. One day I pass an adjoining farm to the west and peeping out from among the farm implements, I barely recognize a 1955 Ford Fairlane because the top, a pine tree green, was rusty; and the body, Neptune green, was faded out. Inspecting the car closer, I discover it is a 4-door with 272 V Fordamatic, with 91,000 miles. The car would not run because the rear main bearing had turned in cap. It had set among the dairy farmer’s farm equipment for five years. The farmer was willing to sell the car to me for $55.00. It was then brought 200 miles north to Frisco.

The engine was professionally machined in 1980. The cylinders were bored to 0.030 over, turned shaft to 0 .010 for the rods, and turned mains to 0.020. A valve job and cam shaft bearings, etc. were professionally done by Bull Machine in McKinney. I also assembled the engine to specs.

That same year I used the automatic transmission as a teaching project in one of my shop classes. The students also rebuilt the front end and did the brake job under my supervision.

Having four children and a wife to support on a teacher’s salary left little time or money to continue work on the ‘55. So it was parked in our garage for 20 years while we raised our kids and sent all of them through college. I had never lost the dream of restoring the car to its original condition. When I finally got to roll the car out of the garage, I discovered that the valves were stuck. That was not a great disappointment to me as I needed to install hard seats because of unleaded gas. Wayne Calvert Engines in Denton installed the hard seats in the heads in 2006.

After installing the heads, I started the engine, and learned that the high school rebuilt automatic transmission did not perform well after setting up for 20 years. It was then professionally rebuilt by Frisco Automotive. After getting the engine running properly, I removed all the body bright work, and had the chrome redone by Al’s Associates in Fort Worth. I repaired and polished the stainless myself.

Many hours of research were conducted by me for the purpose of finding the best paint shop available in my area. I finally decided on Main Street Paint and Body in Randolph, Texas, about 50 miles from our home. The car was taken to him after we had agreed on a price for the work he was to do. He completely disassembled the body of the car- doors off, windows out, seats out, and the body was sandblasted. The car body was rust free and had the original finish underneath the car. After many trips to check on the work, and the “usual” round of problems getting it done exactly like I wanted the car to look; it was ready to be picked up. The ’55 had been residing at the paint shop for about one year. The finished product was well-worth the wait! The final buffing (which would be another whole new experience with the paint shop!) would be done later after the upholstery had been installed.

The next project I did was to covert the car to 12 volts and alternator. The radio was changed to AM/ FM, MP3 compatible by Mike Hagan Antique Radio, Pennsylvania. Fender skirts with trim were added, and Dennis Carpenter’s outside mirrors were installed by me. Insulation from Eastwood was installed in doors, roof, and floors. A new cover and firewall insulation purchased from F R Parts Store was added.

Five tires were purchased from Diamond Back Classics out of South Carolina. The 215/75/15/21/100 tires are whitewall, DB FURY 2 5/8 inch. The full hubcaps were ordered from Dennis Carpenter.

The original seat covers, tatters and all, front and rear door panels, and swatch of headliner material were sent to Larry’s Thunderbird in California (Rod Olmsted) to be duplicated. A beautiful product was returned six months later. Bob Fuller Upholstery in Fort Worth professionally installed the upholstery. I have also added power steering from Don Stickler, and booster brakes purchased from Ron Lightfoot in Canada. Numerous other accessories have also been added.

Restoring the car has been a work of love for the number of years involved in getting it back to its original condition and ready to be shown. I now enjoy driving the car with 1955 tags and entering the car in classic car shows. I enjoy looking at my turquoise and snowshoe white car every day as it brings back many happy memories from 55 years ago.

Many individuals and parts vendors have helped make my dream come true. Don Stickler helped me find original parts and gave advice to jar my memory on how parts went together. Mike Beckwith from Ohio gave me much needed advice on assembling the car. F R Parts Store supplied parts and advice also. Larry’s Thunderbird and Rod Olmsted did the upholstery materials when no patterns were available so he had to use the tattered and torn remnants I sent to him. Mac’s also supplied parts and often helpful advice. Others who helped were Green Sales of Ohio, Concours Parts, Tee-Bird Products Inc., Obsolete Classic Auto Parts, The Clock Works , Wisconsin, Old Texas License Plates, San Antonio, Texas, and Norbert Doll of Oklahoma.

Much thanks and appreciation goes to our son, Vince. He spent many hours doing research on the internet, and ordering many of the needed parts for the ’55. This project would have never made it off the ground without his and my wife’s encouragement and support over the years. Thanks to our other three children, Wes, Scott, and Regina for Christmas, birthday, and Father’s Day gifts which included parts for the ’55!!