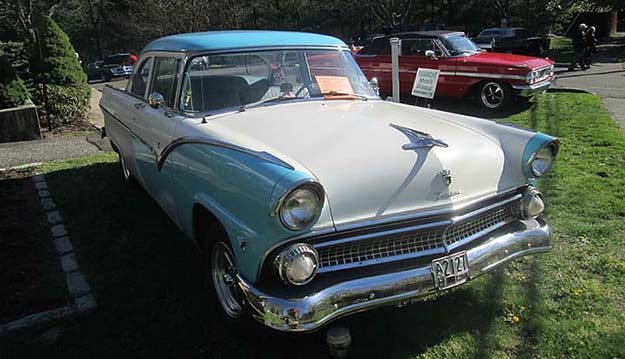 As far back as I can remember I was fascinated by everything mechanical, especially cars. As a preteen I would gaze from the back seat at just about every car we passed, dreaming of one day owning one.

Dad gave me my first driving lesson at age 12 in his 47 Studebaker, on a dirt road in New Hampshire. Also, that year I began a paper route and during my first month I spotted an old car parked under a tarp in the rear of a customer’s house. It was a 31 Chevy sedan and he said I could have it for $5.00! I was thrilled and more so when Dad said I could buy it. We towed it one-mile home with a rope hitched to Dad's car and I did get it running.

The following year dad bought a 53 Ford and I received more driving lessons, on the same dirt road in New Hampshire.

Time passed, I acquired a 41 Plymouth and a 48 Chevy to play around with but neither stayed around until my 16th birthday. So I had to shop around and found a 55 Ford Mainline within my price range ($400.) Dad let me buy it since I had saved enough to pay for it plus one year’s worth of insurance.

I always had a gas station job until I got married but wasn't always able to work on my cars at the shop. Dad let me keep tools and car parts in his garage and in return I would keep his cars running and keep the garage clean enough to keep a car in it. I worked on quite a few cars there, including my 55 Ford. I used our old swing set and a chain hoist to change 2 engines and jacked cars up on the side of the street near the driveway, used bumper jacks, logs as jack stands. I removed and rebuilt trannys right there on the ground.

When I retired in 2004, those memories led me to buy a sedan like Dad's 53 and I still have it today. Mine however isn't a 4 door 6 banger like his. I’ve got a 2 door with a flathead V-8. Soon after buying the 53, I began to look for a 55 to replicate the first car I owned as a real legal driver. I found a few within my price range but they needed too much work. Sadly, I bought one but after getting it home found the frame rotted in 3 places. That killed my interest and I parted it out.

Finally, in 2015, I found a decent running 55 just 35 miles from me. The car was originally in Florida until the late 70s and considering it's been here in New England for over 30 years, the rot and rust weren't too bad. It is a Fairlane sedan, bit of an upgrade from my Mainline. Now it's a driver, mechanically sound and fun to drive. It is a work in progress and I may never get it completely done. That's OK cause my original 55 was never fully done either, between racing it and denting it a few times.

Now I enjoy my “new” car whenever I can at cruises and car shows. I'm slowly upgrading it to make it safer for longer trips to shows and events. It now has a small block F0RD V-8 with automatic overdrive and will soon have updated suspension and brakes to match.
Always a work in progress, I'll share the final chapter when and if I paint it Lavender top over deep (almost black) plum.