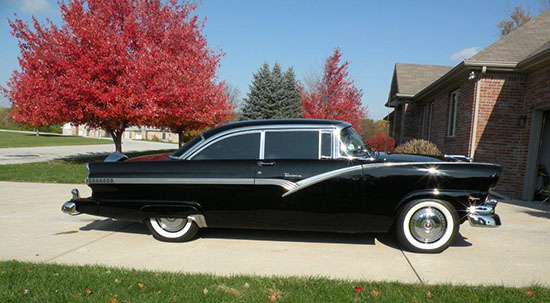 It was 1961 and was just out of high school and I was ready to enter college which meant that I should start looking for my first car. My brother found a 56 Ford he thought I should go drive on a dealer lot just nine miles away in Sturgis, KY. What a find it was, 1956 Victoria two door hard top in Sunset coral and Black, 292 CI, water cooled automatic.

I was driving it when I met Kay in college. Kay and I were married in the spring of 1965 and in 2015 we celebrated our 50th anniversary That Vicky served me well until I traded if for a new car the day John Kennedy was killed.

Twenty years later, we still talked about how nice it would be to have another one. It was a real hot day in August of 1985 when I put an ad in the Prairie Farmer Magazine (Indiana Publication) looking for a 1956 Ford Victoria. We were living in Valparaiso, IN at the time. A truck driver from Ladoga IN called and said his 56 matched what I was looking for. Three days later, I drove it home and started the restoration process. I found a body shop owner operator that was willing to work on the Vicky in the evenings when I had time to work with him. He told me he was a crash rebuilder, but he was sure he could make the Vicky straight and fit properly and give it a paint job that would stand out for years and I was welcome to work with him even though I had very little knowledge of body work at the time. Over a four month period he and I were able to rebuild the body and he was able to paint it just a month before John Deere Company (my employer for 31 years) transferred me to PA. 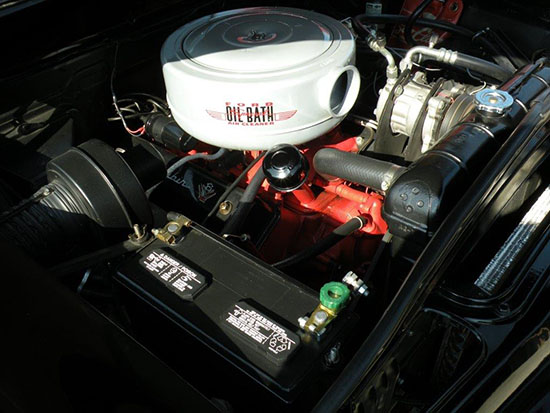 With the engine back in the car and nothing else, Kay and I had Wheaton Van Lines (the moving company) load everything we owned into an oversize semi–trailer along with the Vicky that they built a special platform in the trailer for. It was in Lewisburg, PA that I actually got the car back together and running. We were very successful winning top prizes at local shows and winning an AACA national first. That next year we met up with John Stanley and his CVA convention bound group and drove it from Lewisburg, PA to Nashville, TN. We were able to pick up a third place in Judge Class at that convention and be with people that have been friends for many years. CVA truly is a family organization of people that really love these old mid-fifty Fords.

The car was the FoMoCo Times cover story in 1988. In that story I listed several of the CVA members that advised me how to build the 56 Vicky. During the process, I decided that I would learn as much as I could about these mid-fifty Fords and as time went on I would pass it on to other members. The last several months, I have written several articles about these cars covering many subjects such as performance, ride, electrical, brakes, fuel, cooling and things that can be done to improve the enjoyment of owning and driving these vintage Fords.
It would be hard to describe the fun and enjoyment that Kay and I have experienced over the 30 years that we have been members of CVA and owing this one 56 Vicky. That is true, the black two door hardtop is the only one we have owned and driven 54,000 miles since we restored it in 1987. No doubt we are recognized in many circles as the couple that has the black 56 Ford. Once on a trip from PA to IN a CVA member came into a restaurant in central Ohio looking for Kay and I because he recognized the Vicky while he was driving by the restaurant.

Compliments about the car and how it looks have been very enjoyable for us and as I write this, I remember one Sunday in eastern PA at a local car show, a lady and her 6 or 7 year old daughter walked by the Vicky and the young girl paused looked up her mother and said (Mommy it is so shiny, I can see myself). Memorable moment and there have been many. If winning trophies is any measure of success, we have had our share. Seeing a youngster give you the (thumbs-up) sign is always special. Our Daughter named it Miss Vicky and now our granddaughter thinks it is a (cool ride).

Thirteen years after Tom Prentis did the body work and painted the Vicky, he did the body work and painting on my second antique vehicle. It is a 1973 F-100 Custom regular cab short bed and has been winning shows on a regular basis. Just one month before 9-11-2001 it won an AACA national first. Kay and I use it a lot to and from the golf course. It is the last pick-up my Father owned while he farmed in western KY.
Restoring a car in the late 1980’s was a matter of looking through publications, catalogs and walking endlessly in Swap Meets. Today is a bit different, the internet with websites like eBay makes the process of finding parts easier and internet forums makes getting information better.
I have enclosed a few pictures of this 56 Vicky that looks the way it did in 1987 when it won its’ first show, however about eight years ago I added a centennial kit.

Thanks and enjoy the ride.
Jerry A. Thomas
Central Region Director