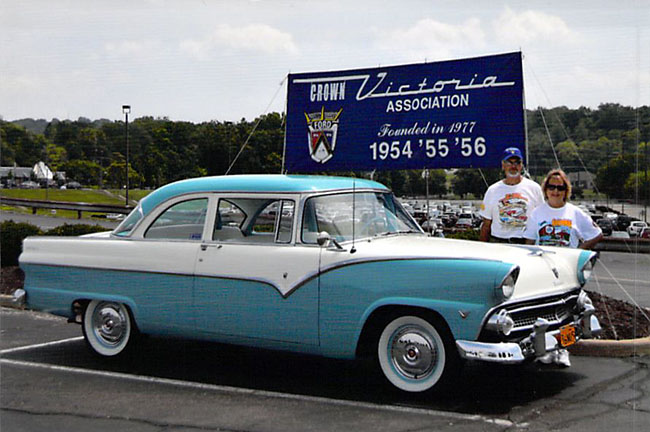 When I was 16, my Dad bought me my first car, a 1955 Ford Custom Line Tudor for $200. I believe the year was 1963. The body needed work done to it, especially the rocker panels. So my Dad and I started working on it. Since we had to paint the car anyway, I took off the hood ornaments and scripts (Dad didn't object) and then broke out the J C Whitney catalog. From the catalog I purchased a tube grill, fender mirrors, full moon hub-caps, and adapter kit to put Oldsmobile bullet tail lights on the car (Dad didn't object).

Then one day I came home from school told my Dad someone at school is willing to trade his manual transmission for my automatic transmission, then I would have a three speed on the floor. (Dad objected I) Dad sat me down and explained, "When he started driving he shifted on the floor. Then they made It easier by shifting on the column. Then came the Cat's Nuts (Dad's way of saying really good I). You shift the pointer to R and go backwards, then shift the pointer to D and goes forward. And you dumb SOB you are going right back to the beginning." So I explained NO ONE wants a slush box, and a floor shift Is COOLI Well it worked, and Dad had let me use the garage. Some of my high school buddies came up to help me switch the transmissions. My Dad had a good friend that was a Ford mechanic and asked him to help us, and he did.

Truth be told, I never even got under the car during the switch. When they were finished I was one happy camper! Shortly after the switch, there was a problem. When trying to shift sometimes the transmission would lock up in first gear. I would then have to crawl under the car to pry the linkage to unlock (rain, sleet, snow and hail).

My best friend's Dad had a gas station/garage. I dropped my car off for state inspection while I was In school. When his Dad took it for a test drive it stuck for him too. He bent and adjusted the linkage and the problem was solved.

I drove my 55' every day to school, work, dates, drive-ins and dances. One time in December of 1964 the four of us kids knocked off school and went deer hunting. We went to Tioga County in the mountains of northern Pennsylvania. My Ford was our hunting camp for 3 days and 2 nights. Four of us slept in my car for two nights we were NOT very comfortable I On the third day we drove back home, about 180 miles with one deer on the roof of the car, that I shot. It was my first deer and proud of it.

Graduation came the end of May 1965, and after enlisting in the US Navy, I was sent to boot camp in the beginning of July. The car had to go because I would not be around for several years. I saw the 55' one time when I was home on leave. He didn't give a S_ how it looked, and it looked like crap I He wrote on the headliner inside and wrote on the paint it looked like with markers. It looked awful, and I felt awful seeing it! It may sound dumb but I felt sorry for it!

Around 1970, I bought another green 1955 Ford Custom Line Fudor, this time. Dad and I pulled it out of the field with a tow chain and pulled it home. I paid $20 for it. My girlfriend, now my wife, cleaned the inside of the car and found mice nests, and I found acorns all over the motor, and when I started the car acorns were also flying out the tailpipe. My Dad and I got it running and then took it for inspection. 1 also took this one to Tioga as well but didn't sleep in it. I didn't have time to work on it the way I would have wanted to so I sold It. Second mistake!

Years went by marriage, children, grandchildren, and then retirement! During this time I always wished I still had my 55' Fords. So I started looking to purchase another. In October 2009, I was fortunate to find one close by In Pa., a 1955 Ford Fairland Club Sedan. The car was originally from Kanlnapolls, North carolina. The guy I had bought It from had painted It and had it running. They trailered it to my house for me and told me he had lots of small parts if I ever needed anything, which I did.

One of the first things that I noticed is that the odometer did not work. So I took out the speedometer cluster and sent It to Instrument Specialties:. I don't know how long the car sat, but there were wasp nests under the dash. The upholstering was bad so I gutted the whole inside. One of my Harley friends does upholstering so we worked on it together and I was his gofer. Working under the dash was easier without the seats in it. Now I wish I would have replaced all of the wiring when the seats were out. The steering wheel was a cracked up mess, so I took It to a local body shop along with the front seat apron, arm rests and wheels. The clock was sent to Clock Works and the Radio to New Jersey Antique Auto Radio Conversions. I used a rubber mallet to take all the dents out of the hub caps, polished them and replaced the Ford Insignia inserts. They look like newl As things came back I put them back into the 55', and now I have a refurbished interior.

So it is all back together and now taking it to a car show. I get to the car show and a 56' Ford pulls along side of me. Holly cow that car makes my chrome look like crap. So I took off the bumpers and grill and sent them to be re-chromed, and handles and tail light rings replaced. After the bumpers and grill were put back on I started to get awards at car shows.

Now it Is 2012, I decide to attend the CVA National Convention for the first time in Heron OH. I rented a UHaul trailer, and when I get to the convention I parked aside another car like mine. That other car Is an inspiration, It's perfect, and I enjoyed talking with Les and his son, Tom. Some people started asking me where the Club Sedan scripts were, and where Is the trunk lid chrome? I was used to a Custom Line so I wasn't aware about the trunk lid chrome. I attended the annual spring Carlisle meet and found a used trunk lid chrome, but found it was cheaper to purchase a new one rather than having the old one re­chromed. So with those things added and some new glass in the wing windows I decided to go to the 2015 CVA National Convention at Dayton OH. This time instead of renting I bought a new open trailer to haul my car there. I parked aside of my buddy Les again. The next morning I walked out and there Is a beautiful Custom Line owned by Charles and Linda.

All these memories and those of my I late father and I working on my 55' Fords Custom line came back to me.

I think that is what it Is all about the "Memories"!