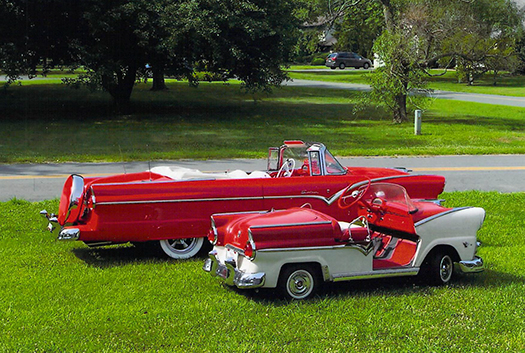 The golf cart shown with our redone 1955 Sunliner was built in 1990 by Bob Haas in 1995. He sold it to a gent in Florida, and I traded my 1955 Ford with two front ends to the gent for the Club Car 1955 golf cart. It looks cool in the front of the 1955 Fairlane Sunliner that we just restored from a wild custom to stock.

Over the years, I owned parts and cheap project cars. Then in 1999, I bought a rough-running, highly-customized 1955 Sunliner with a fair on a Sunliner was $2,224 and 49,966 were produced (far more than 1,999 Glasstops made in 1955). In 2000, another $2,500 worth of work for new intake, carb, exhaust, and wiring, and the car ran well. In January 2003, it was a Fomoco Times cover story. Yeah! It ran well until 2014. Then I undertook a cosmetic restoration to stock. It has a good-running Y-block 292 and 3-speed stick with overdrive, so little mechanical work was needed.Fortunately, the Sunliner had been heavily customized in 1958. I say “fortunately” for three reasons. First, the car would be driven very little, mainly to shows. The 85,570 odometer miles might be original. Second, the car would be kept inside, protecting it from the elements. Third, the car would be driven at least a couple of hundred miles per year, keeping the gas fresh and brake lines clean.

The old style goofy customizing was radical, but I drove it that way from year 2000 to year 2014. The truth is that the wild customizing grew on me, so I could live with the amateur white paint job over poor quality body work over the metallic green custom paint over the VIN # original all-red paint. In 2014, here was the customizing
that was to be UNDONE:

I again turned to Jack Evans of Annapolis to do the demolition and disassembly prior to body work and painting. Local body shops wanted no part of it since they are “in and out” collision shops. Two guys in my local car club who sometimes do cars were busy for the next year. Fortunately, I found Mark Rousseau and Albert Casey on Kent Island. Two months and $10,000 later, I had a straight car and a stunning, all-red car. Then the car went back to Jack Evans in Annapolis for assembly. A & K Upholstery in Grasonville covered the stock seat springs. In the process, Jack Evans acquired a lovely wife, Kitty, who also helped with the assembly. He also had help from Gary Dunn from the Philippines. They all did the job right, with no bugs.

The original VIN plate was for an all-red Sunliner, stick shift, red and white interior, and Y-block V-8. Now it is!

Admittedly, I left a few chores undone. I honestly like the shaved door handles, Eldorado dual antennae, stick shift on the floor rather than on the column, and vintage American Racing Wheels with spinners, and a bit of chrome inside the engine compartment.

Besides a total freshening up the wrong, tired interior and poor quality body and paint, there should be insurance and registration benefits. Modified vehicles in Maryland are tagged as “street rods” and they cost more to insure. Also, stock 60-year old cars in Maryland can get a “forever” license tag for a one-time fee of $50. However, the car needs to be totally inspected and the MD inspector needs to be convinced that the car is stock, to be reclassifed as “Historic” (not “Street Rod). Do you thing that I have done enough to change the 1955 from “Street Rod” to Historic?