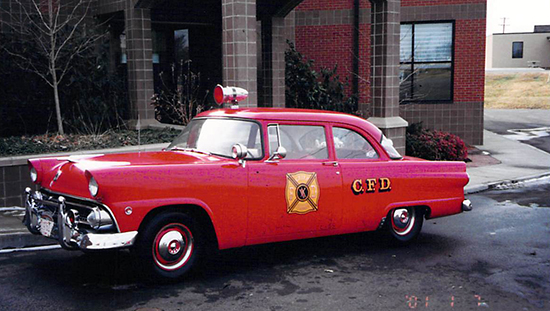 I first saw this 1955 6 cyl. Fire Chief car in the parking lot at the 1990 CVA Convention in Dearborn. I fell in love with it. My son David had been on the local fire department for only a few months and my brother C.W., who was born the same day and my wife Shirley back on January 9, 1938, was on the same fire department. It was owned by Warren Fetzer.

I like what I saw, so I asked Warren if it was for sale. The answer was no. I was having a lot of health problems at that time and didn’t really need it. About a year and a half later I made a call to Warren. Still the answer was no. So, I started calling Warren every six months to check on him and the 1955 Fire Chief car. Then came the 1996 CVA Convention at Dearborn Inn. Now mind you this was 6 long years that I had bugged Warren. Shirley had drove two card to Dearborn. So we walk in to the doors there was a group of CVA members greeting us as usual the first day (or every day) of the Convention. Warren was in that group. He looked me in the eye and said yes. I guess he was tired of me calling him every six months. True, I had a garage full Because I had just bought a 19,5000 mile, all original, 1955 4 door Fairlane and a 1957 Red and White 2 door hardtop. But my answer was yes with one catch the car on soil at 11 McClardy Road. The deal was finished.

I have used the Fire Chief car for lots of special events, fund-raisers, weddings, real estate ads and 911 ceremonies every years since 2001 for the fire department on September 11th. It makes a wonderful parade car.

The first wedding was in the fall with the Fire Chief car in 2000. It was in the peak of fall colors about 25 miles out in the country to a beautiful outdoor wedding. When we left to the wedding to go the reception, I was told to take one hour to get the bride and groom to the reception. So away we went with the red lights flashing, as I knew all the roads. It was the county from my younger years of running alot faster because of a few factors of life and other reasons. The bride was wondering how a country boy knew so many back roads, so I invented a few shine stories.

Another great joy was when a young lady called me on a Friday, asking if I would be willing to bring the Fire Chief car to her step-fathers surprise retirement party from the Clarksville Fire Department. So Saturday morning I got out to clean the car good and in my driveway he rolls in to see me about some parts. He says, why are you cleaning it up. I said, It needs a good cleaning.

So the next day was the part from 2-5 p.m. on a Sunday afternoon, by 1:45 the Fire Chief was sitting on its place at the front door. All the firefighters that were on duty at the main station were there, plus a couple dozen off duty firemen and all the bigger wheels of the city. I was a real pleasure to have the 1955 Fire Chief car enjoyed by so many people. I knew most of the people that were attending the party. I had know the retiring assistance chief for years - we had played, rode bicycles, went to school, raced stock cars, drag raced and worked together in our younger years. Don’t forget baseball, I batted first and he followed with the hits.

I cannot express how much the CVA membership has meant to me over the years and much, much after this year.