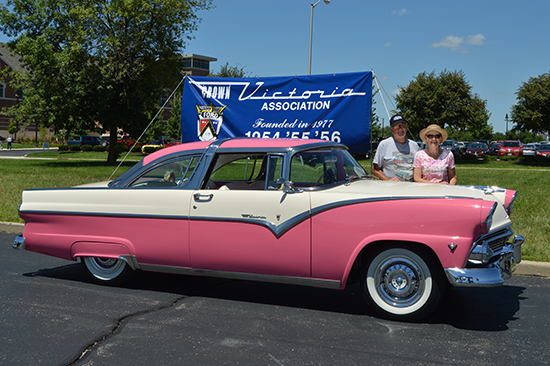 Our trip to Dayton OH started out quite normal – about 100 miles out the engine seems to be losing power. Hot weather, right? Also hard starting as I stopped for fuel every couple hundred miles, but ….. hot weather, right? Got a little worse the further we drove. Too late to turn around as we are now over half way, almost thru Illinois. We had decided to spend the night in Danville. As we parked at the motel, the engine died, and two couples were standing close by and they came over and pushed us into a parking spot by the grass. As I walked around the car I found we were sitting by sprinkler heads so they helped us push the car out of that spot and under the canopy of the motel where the clerk said we could park our car. We got out our CVA roster to see if a local member might know of a mechanic/shop who might be able to look at it. Larry Cox was quite close and had time to check it out after 10:00 AM, but I wanted to be there by then. We found the name for Danny Calton, who knew of nobody in the area that he could recommend. So after some small talk and he knew where we were staying, he and his girlfriend (Emily) insisted on coming out and taking us out to dinner at the “Beef House” and what a treat it was. Had a very nice evening with them and when they dropped us back at the motel, we met a fellow standing close to our car who had heard of our woes from the desk clerk and wondered if he could be of assistance as he was a retired mechanic. Gene Prokop from Omaha came to our rescue. I explained what was happening with my limited knowledge as I don’t claim to be a mechanic but I have been around these cars all my life so I have enough knowledge to make me dangerous. I told him I was convinced it was a vacuum problem. He said perhaps but let’s look at your points first as it sounded to him like they were probably not opening properly. AND HE WAS RIGHT. So after adjusting them the engine fired right up and seemed to have some power back. What a great bunch of people we have met, but wait…. There is more. At breakfast Gene came over to me and any told me he had set my points at .0030 and it should have been .0016, but shouldn’t give us a problem for the rest of trip.

Well we got down the road to Crawfordsville and we were right back where we were, (no power) S000 I figured it probably was the adjustment of the points so I stopped at a parking lot and reset the points at 16. Battery was so low it wasn’t about to start so I called a local shop and they sent a fellow out who knew the old cars quite well. He rechecked what I had done and then I remembered I had a new set of points in the glove box. So we put them in and with his power pack we got started and followed him back to his shop and put the charger on it for and hour while we went to lunch. Came back and engine fired right off. Paid them $112.00 and started down the road. 2 miles and the engine died and there we were. Called the shop, they sent out a flat bed, loaded us up and back to the shop. Installed new condenser and new coil which I had done last year and we were once again on our way. These folks at Froedge’s Repair were absolutely wonderful to work with. They charged me for the condenser and coil, no more labor and nothing for the tow. Total strangers and they treated us so well. The manager’s name was “Bo” and we certainly appreciated him & his crew. We had to stop for our last fuel stop and didn’t want to shut the engine off as I knew it would not start again, It was now 6:00 pm and we had expected to be there around noon so we were a little hungry. We drove thru Culvers for an ice cream cone (bad idea). Their ice cream is so soft on a 90 degree day it was melting before they handed it to me. So we are driving around the building with no power steering and the cone melting down to my wrist and I took a bite and the whole thing ended up on my lap. I let off the accelerator and the engine died. We sat on their patio, ate the ice cream cones (mine was replaced) and waited for our engine to cool down. It finally started and we limped, banged and farted the rest of the way, but we ARRIVED about 8:30 pm.

The next morning I got several opinions from several people and then I met Paul Barlow (what a guy). He stayed with me the whole way. I bought a new set of plugs from Bob Haas for a buck a piece (extravagant)? I put them in and found two that were very wet (not firing) so Paul checked the wires and they were all good so he said “Rod, it must be your valve adjustment.” So he adjusted them (way out of adjustment) and the car started and just purred. That engine has never run so smooth. Why someone had not mentioned that to me before I don’t know. Remember I said I am not a mechanic? Proof is in the pudding, right? We left Friday morning to go to Ky., to see the Creation Museum, then on to Decatur, IL to spend some time with our daughter’s family and our Great Grandson. Car ran just wonderful. Left there Sunday morning, stopped at a truck stop for breakfast and fuel, car started just fine and we were on our way to the only toll booth on the trip, stopped the car and the engine died. Rita jumped out to help push it thru and a lady from the car behind us helped her and the motor cycle in front of us paid our toll (?) We pushed it over to the parking lot and there we sat. It seemed to be flooded with a little fuel running out of the carburetor. One fellow stopped with cables from his car and no go. So we waited…. And waited….. and waited…. And the maintenance truck finally got there with a power pack so powerful it almost tipped my car over and the engine started and we were on the road again, with the knowledge we had to stop two more times for fuel before we got home. We stopped for fuel at the Stouton, WI. exit and as we pulled up to the gas pump, the engine died again. Rita said NOW I really smell gas. Well… we ARE at a gas station, right? Wrong, my carburetor was running over, like it was making gas. Called our friend Wayne Johnson (20 miles away). Who do you know that would like to look at my car? He told us to call a man by the name of Ron Nelson who does a lot of work on older cars. Ron had to go home, get his trailer and then get in all that traffic from Wisconsin Dells and drive for an hour plus to come and get us, load the car, drive us to the motel about 5 miles from his home. In the morning he opened up our carburetor and found some dirt and crud that got past the filter and she fired right up. Ron then picked us up at the motel and drove us to his house to pick up our car. Now get this – all for $93.00. he spent 3 hours on Sunday eve, two hours Monday morning and would not accept any thing more. I tried to give him $200.00 and he wouldn’t hear of it. Just wanted to help us out. Boy, did he ever. What a guy. Rita and I were overwhelmed with the people we met on this trip and the kindness they showed. Well we are home again and I have made a decision from this trip. We have driven these old cars across the country for several years and have never broke down – boy did we get pay back for that on this trip – soooo I have promoted our car to a TRAILER QUEEN and what a queen she is. We will drive the short trips but other than that she will ”probably” be on a trailer!!!