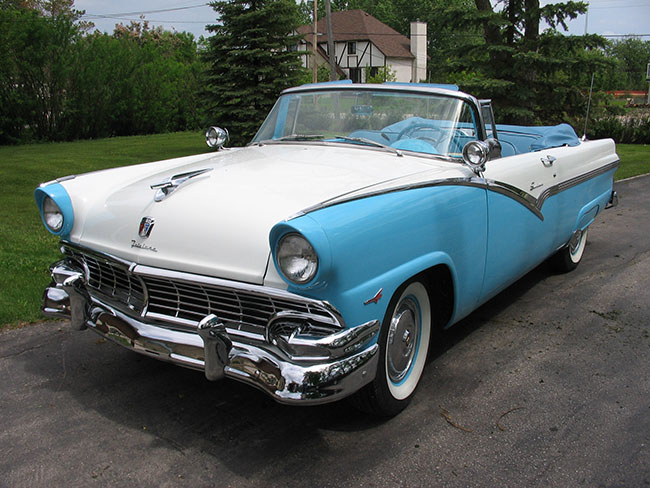 The 1956 Ford was basically a carryover of the ’55 model with different trim, but inside it was all-new.  Included was a completely restyled dashboard available with optional safety padding along with padded sunvisors and seat belts as part of a safety promotion.  Instead of a flat steering wheel the Ford used a new wheel with a 2.5-inch recessed center hub said to lessen injury to the driver in the event of a collision. Increased power was available from the 292 cubic inch Thunderbird Y-Block V8.  Thanks to higher compression and improved camshaft lift it broke the 200 horsepower mark, while a new 312 cubic inch Thunderbird Special V8 was added at mid-year for an additional 15 horsepower over the 292.  For ’56 Ford also upgraded to a new 12-volt electrical system, following Chevrolet’s lead in 1955.  Solidly built with clean, colourful styling and good performance the ’56 Ford sold well including its Fairlane convertible model with 58,147 built.  Today the ’56 Ford Victoria hardtops, Skyliners and Sunliner convertibles are solid collectable vehicles and while there are a good many still around their popularity has soared in the past decade.

For Ron Lambert of Headingley, Manitoba, Canada the ’56 Ford has been a passion.  “I just like the ’56 Ford body style,” says Lambert.  Having owned a total of seventeen ’56 Fords including sedans, hardtops, station wagons, pick-up trucks, and even a panel truck, a ’56 Ford Fairlane convertible was the one model that eluded him.  It was 1995 when Lambert went to see two rusty convertibles that were for sale in Nebraska.  Both cars were complete but the bodies had so much corrosion, Lambert stripped them off of their frames.  With the frames loaded on a flatdeck trailer he cut both car bodies in half behind the door and placed them on the trailer vertically atop of the frames.  After arriving back home he began stripping the cars of all that was salvageable and filed the parts away in his shed.  With parts to spare he continued to hunt for a convertible body that was repairable but just kept coming up with more rusty cars.  In 2003 he heard of a completely rust-free two-door sedan in Rorketon, Manitoba.  “It was complete with no rust or dents so I bought it and drove it onto the trailer,” says Lambert.

Back in his shop he completely dismantled the car and sandblasted the body at Winnipeg Sandblasting and coated it with Endura epoxy primer.  With veteran bodyman Dan Hope they found the lower portion of the two-door sedan body wasn’t that different from the convertible.  With the body mounted on one of the X-braced convertible frames and the doors removed, they cut off the roof and drilled out the factory spot welds holding the inner structure from the side windows and rear seat.  The convertible frame has a unique X-brace in the center to stiffen the chassis to compensate for the lack of a solid roof structure.  Next was the careful removal of the sedan’s front windshield cowl, followed by welding the convertible’s cowl and inner rear top well and side window structure into the body.  With the convertible structure in place it was then a matter of installing the factory top mechanism and side glass.  The convertible doors fit in place of the sedans without modification and with the conversion completed by using the original convertible structure, the rebody is virtually indistinguishable from a factory convertible.

While Hope continued to prepare the body for a new coat of Robin Egg blue and Wimbledon white paint, Lambert worked on the powertrain.  A ’57 vintage 245 horsepower, 312 cubic inch Thunderbird Special V8 was thoroughly rebuilt by Grant Rowe at Custom Crankshaft then paired up with a rebuilt Ford-O-Matic transmission.  The entire chassis received a full restoration with new, bushings; brakes and steering components, while Minute Muffler supplied and installed a new custom dual exhaust system.  To keep that ‘50s flair Diamondback Classics in South Carolina supplied a new set of 15-inch wide whitewall radial tires.

Over the years leading up to the restoration Lambert picked up parts to ensure that his convertible would be equipped with the lion’s share of optional equipment available in a ’56 Fairlane convertible.   It includes Master-Guide power steering, Swift-Sure power brakes, Power-Lift windows, Power Seat, power top, seat belts, back-up lamps, dual spotlights, full wheelcovers, spotlamps, rocker moldings, dual rear antennas and a Town & Country radio that has been converted to AM/FM stereo with a six-disc CD changer, by NJ Antique Auto Radio Conversions.  There's even a Vintage Air air conditioning unit that blows through the factory dash vents for cool cruising on those hot summer days.

A member of the Fabulous 50’s Ford Club of Manitoba and the Crown Victoria Association, Lambert is looking forward to many years of happy cruising.