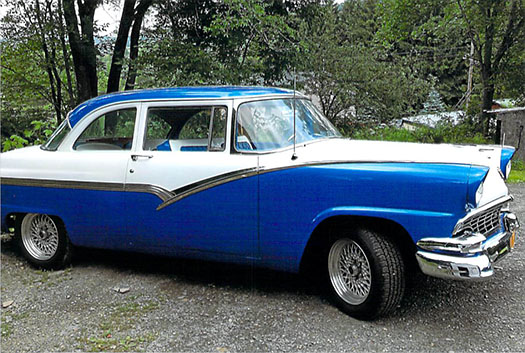 January 2010, was the year the project started. My aunt found a 1956 Ford Mainline for sale. I didn’t know what it looked like until she showed me, but thinking it was in good shape for the year made the deal to bring her home on a cold, snowy day from Wayland, New York.

My aunt showed me black and white pictures of my grandmothers Ford that she had before I was around. Hers was pink and black, and I thought wouldn’t that be cool to paint it just like grandmas. Then changed the plans and decided on the blue and white.

She was plain as could be, we say the diamond in the rough though. She was straight six, with three on the tree. I couldn’t drive it, so we looked for something different to put in it. We got a 302, bored 30 over and an automatic transmission. My aunt Carol, and brother Brian rebuilt the motor, and my cousin Mike rebuilt the transmis-sion. My father, Harold was the electrician for this project. We replaced the suspension, tires and wheels, radiator, put a Holly four barrel carburetor on the motor along with lots of other things that needed replacing. My brother was the brains on changing the brackets to change the rear seat.

We have met several of my fellow club members, Paul Placek, Toby Gorney, Hal Bailey, Jack Strope Jr., Don Stickler, and Joe Hulverson, to name a few; all who have had parts or knowl-edge for us. In my phone conver-sation with Don, he said I was a juvenile delinquent. I laughed, never being called that before.

We’ve traveled all over New York, Pennsylvania, Maryland, and Michigan for parts. And after a drive to Michigan to meet Joe, decided the second time needing his help told him that we couldn’t make that drive again and asked him to ship the rear seat to us.

Once, we thought we had a good grip on her, we sent her off to the paint shop to get finished up. Don Mitchell, “Custom Paint Works by Mitch”, and his friend Randy, were finishing up the exterior. One day before she was ready for paint, Mitch called us with the bad news. He said the rear quarters had to be cut out and replaced. Apparently, it was hit hard on the drivers side and someone put bondo in it. It was a couple inches thick, but they fixed that. They worked hard on it, putting lots of hours in it. But she was put back together and got her road worthy once again.

Ready for paint, Mitch said that the blue was missing something. He added a secret in the paint and told me that he called it Di’s blue bling. Mitch, introduced us to Charlie who did the upholstery work for us. And as you can see he did a fantastic job.

This whole project took lots and lots of blood, sweat and tears to complete. I want to thank my entire family for all their help and support to make this happen. She is now ready to start making the local car shows.