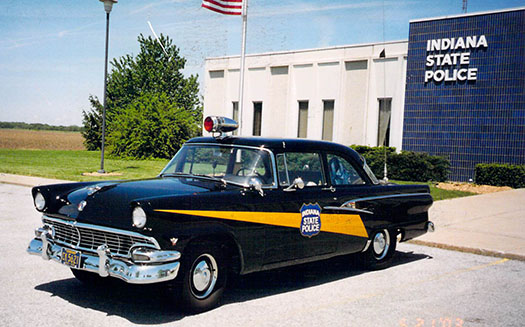 In the fall of 1955 I was riding my Schwinn Panther. While riding past my neighbors house (who was the town J.P.) I was able to check out the brand new 1956 Indiana State Police cars. I stopped for a closer look. One of the troopers left the J.P.’s office and he must have seen that I was interested and he took the time to point out the new features of the 1956 or maybe he just wanted to check out my Schwinn as it was decked out with all the accessories! In any case I never forgot that experience. After 3 years in the Army as an MP. I considered becoming a State Police officer until they sent a recruiter to interview me and explained the pay scale and that was the end of that! Fast forward to 1976 when Toby, Sandy, Dinah and I met and decided it was time for the 1955-56’s to be recognized.

Through the years I have owned several 1955-56 Crowns, Converts and pickups. Through the club I’ve made many friends and one of my close friends is Dick Snyder from Cloverdale, IN. In 1995 I explained my interest in restoring an Indiana State Police car. He being from Indiana knew what I was talking about. I told him I was looking for a 1956 two-door Mainliner preferably black with a gray interior, stick shift and no accessories. In less than a year Dick called and said “I bought you a car”. I asked him “What did you buy me?” He replied “Well what did you tell me you wanted.” He found a one owner 1956 Mainliner in Kansas. The only accessories were a heater and turn signals. Perfect. The car was painted green but I didn’t want to bring that up!

Now the restoration begins. One of my good sources of info came from the troopers that drove them back in the day. Sadly they are no longer with us. I made trips to the Indiana State Police Museum in Indianapolis where I was able to take pictures of the insignia on the door which helped me design it and take it to the local printer and have it made. Before adding the police accessories I had the car painted black and replaced the 6 cyl. With a 312. It took almost 5 years to locate the correct red light and siren which I finally found in Phoenix, AZ.

Ford’s police package that the time was basically the station wagon drive line. Some of the police accessories I acquired also include the original Motorola radio and speaker, whip antenna, spot light and rear package tray lights. Probably my most prized possession is the original radar detector that a friend of mine had bought at a flea market and had it in his basement for over 25 years. He called me one day and asked if I would be interested in one. I didn’t get too excited as I had been looking for one for years and hadn’t even seen a picture of one. When he brought it over I couldn’t believe he had what I had been searching for. I asked him what he wanted for it and he said “What will you give me”? Neither one of us knew what it was worth so I told him I would pay what ever he wanted as this would complete my car. Then he told me it was “Not for Sale”. I asked if he ever decided to sell it would he give me first chance. We talked for a while and then he said he had to leave but on the way out he turned back and handed me the complete radar unit and said “It’s yours because I know how much you wanted one”. Two weeks later he passed away suddenly. (Thank you Ryder). 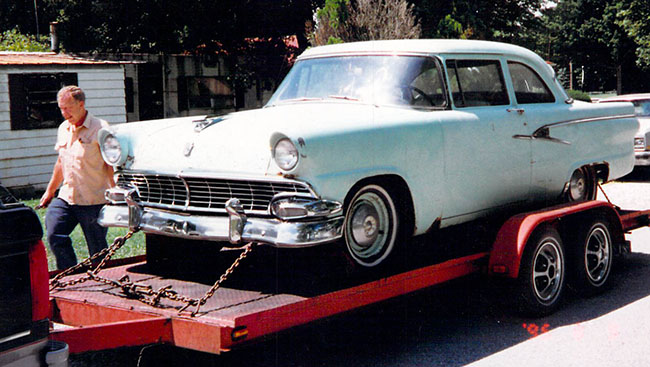 Over the years I have attended very few car shows or cruises but have had the honor of leading the funeral processions of fallen police officers. Some of you in the Midwest might remember in August of 2006 when 13 police bicyclers were riding the entire state of Indiana to raise money for the children of fallen officers to help with their education when a truck came up behind and ran over them and killed two of them. Sgt. Gary Dudley was one of those killed and he was the one who started the group called C.O.P.S. (Concerns of Police Survivors). He also asked me to lead the group of bikers down U.S. 41 and 63. I did it for 3 years. I also lead them the day before the accident. I feel it’s too dangerous for them to ride on the highways today so I no longer lead the bike unit.

I still patrol U.S. 41 now and then. Two CVA members who were surprised to look in the rear view mirror and see a 1956 squad car with lights and siren chasing them. You know who you are! I let them off with a verbal warning!