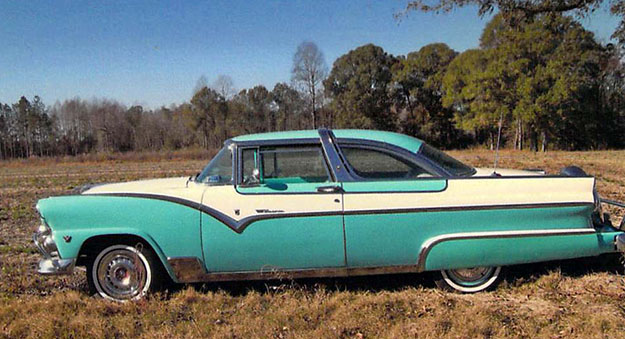 In October 1954 I went to work for the railroad. I owned a 1954 ford. On a Saturday in 1955 I walked into the ford dealership in the little town of Baxley, Ga. There set a red and white 1955 Crown Victoria. I thought it was the most beautiful car I had ever saw. I had to have one.

Luck was with me. A man at the railroad owned a Tropical Rose and Snowshoe White one. He was going to join the military and if I would give him two hundred and fifty dollars and take up payments I could have it. Finally I had my dream car!

It had a high performance engine from the factory. It was a fast car. Car owners would come down from Atlanta, Georgia to race my 1955. It was also mentioned in a true life novel about fast cars and pretty women. One evening late I was heading out of town with a buddy of mine I had just looked down at the speedometer and I was running close to ninety miles an hour. When I looked up there was a pulp wood truck setting in the middle of the road with no lights. I hit the truck. My 55 caught a fire and my friend Howard McCloud whom I had just passed pulled us out saving our lives. My Crown Victoria was gone. I stayed in the hospital for over three weeks.

After the wreak I was in Jacksonville, Fla. I saw a Black and white one setting on a lot. I called the insurance company because the claim on the car was still pending. Three or four days later they called me back and told me to go pick it up. I drove it until the 1957 fords came out. I got married had a family, purchased a farm and built a house. Money got tight so I sold my 1957.

After a while I was in Brunswick, Ga. and I saw a Red and White 1955 on a used car lot. I scraped my money together with my daddy's help and purchased it. On down the road and a few miles later I now own two 55s. I purchased and restored a Tropical Rose and Snowshoe White to its original condition in 1994. Later on I also purchased a Sea Sprite Green Crown Vic with a 428
police interceptor bored 60 over with disc brakes.

I also own a 1959 Edsel Corsair which also happens to be my middle name. In my collection I have a 1963 Yz and 1964 Galaxie convertible as well other classic automobiles. But, My 1955s are the ones I truly treasure. With these exceptions my wife and family.

In Honor Of Our Daddy Hugh Edsel Darsey
Submitted By Daughters: Sheena & Teena