When I was fifteen years of age, I rode my red and white Western Flyer bicycle to the Wauchula Ford Dealership located in Wauchula, Flor-ida. The dealership had a red 1955 Ford Vic-toria 2-door hardtop on the turn table in their show room. I drooled over the prettiest Ford I had ever seen! I promised myself I would one day have one of those cars for my very own.

Six years later at age 21, I purchased my first 1955 Crown Victoria, black in color, for $750. I have the original bill of sale, from Harold Peeples Motor Sales, Ft. Meade, Fl. Same year I had “Vicky” painted Torch Red since my younger brother Robert lost control of the car on a wet road and went through a barb-wire fence, scratching the car all over the entire body. My promise I made at age 15 was now fulfilled. “Vicky” had a dealer option continental kit, one spot light and front grill guard when purchased.

Upon my marriage in December, 1962, I traded “Vicky” for a mobile home. Six months later my finances afforded me to buy “Vicky” back and drove it for another five years. In 1963, I purchased my second “Vicky”, a red and white 1955 Crown Vic. I was now the proud own-er of two Crown Victorias. I then traded the red and white “Vicky” to brother Robert for a 2 door '56 sedan.

In 1984, I purchased a red with white convertible top 1955 T-bird for $7,000 in Arcadia, Fl, 30 miles away from my home town. The Baby Bird had been painted Candy Apple Red and still has same paint today. I purchased a black hard top and painted it white. The bird has power brakes, electric seats, electric windows and power steering and fully loaded 55 T-Bird. It has a low 10 number of 523 consecu-tive Ford numbers for 1955. Records reflect the 1st bird was built and came off of the assembly line September 4th, 1954. This bird came off the assembly line Oct. 16, 1954 indicating one of the first birds manufactured. I replaced grills and added Coker white wall tires. 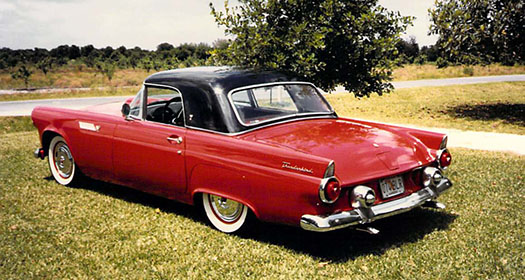 I drove my wife, Diana in the Christmas parade of 1986 as she was chosen “Mrs. Hardee County" queen of Wauchula, Fl. I still have the bird in my Ford collection. The bird is also a trophy winner.

I lived without a "Vicky" until 1985 at which time I retired from the Sheriffs Dept as the under-sheriff with the rank of major. I answered an ad for a 1955 Crown Vic in Bradenton, Fl. 50 miles from my home of Bowling Green, Fl. I purchased Vicky for $3,000, a faded pink and white. Cousin Leon Smith, a disabled body man with partial vision in one eye and blind in the other, restored Vicky back to original color, Tropical Rose and Snow Shoe White. The interior was installed magenta and white (ABC Kit) by Mr. Auto Craft, Gary Powell of Bartow, Fl. The continental kit and a single spot light were added. This car is still a trophy winner and remains in my collection today.

Now comes the love of my life Ford. I purchased my 1955 Ford Sunliner, red with white top in Wauchula, FL from a friend, Don Evors known as Mr “E” for $20,000 in 2005. The Sunliner was named “Rockin Robin” by Mr “E” and his wife Marsha. The same year Sunliner was repainted by Darrell Ellis of Wauchula Ford Vermillion Red code EP. The top and interior was done by Mike Blair, upholstery of Wauchula. I put a set of T-Bird spoke wheels and Coker white wall tires 215x15 and dual Ford spot-light and most recently a set of Merc cruiser skirts painted by Jeff Thompson of Wauchula. The continental kit, accessory guards, front and rear, and hockey sticks were on the car when purchased. 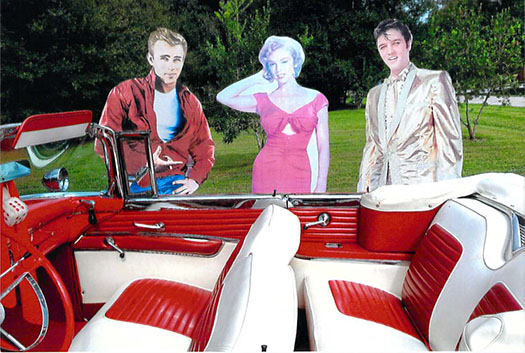 The rear seat pot metal piece and other chrome pieces were plated by John Marques of J & M Stainless Steal Repair of Bunnell, Fl. I had Elvis air brushed on kit by “The Air Brush Man” of Sebring, Fl. “Rockin Robin” is a fun car to drive and an eye catcher. Mr. “E” passed away two years ago succumbed to cancer. He was a life time friend. He was also a CVA Member for many years in fact he recruited me to become a member of CVA. He is missed by all his friends and the Classic Car Associates.

My records reflect Mr. “E” purchased the Sun-liner from Chuck and Elizabeth Sides of Bristol, Va in 1992 for $19,000 and named it “Rockin Robin”. Prior owner for ten years was Claude Sheppard of Dusffeld, Va. I wanted the Sunliner, but did not have the funds. Mr “E” sold it for $22,000 to a party in Arcadia, Fl. Approximately ten years later he purchased “Rockin Robin” back for $10,000. It had been out in the weather and deteriorated. Mr “E” had floor pans replaced and other restoration completed and stored it for approximately 2 years. He would not sell the car it was a keeper for him. I negotiated and purchased “Rockin Robin” for $20,000. It is now in the Baby Bird and Crown Vic family. I learned a long time ago not to keep up with the cost of restoring a classic so at this point I do not know the amount of my investment. I do not want to know...... I am 74 years of age and will enjoy my Fords until the good Lord takes me home!