I built my '55 Crown Vic Glasstop Bumble Bee "my way", as Frank Sinatra would sing. Like many other CVA cars, it is comprised of the best parts I could assemble from quite a number of other cars, including a two-door post Mainline Sedan, two rusty Crowns, a 1971 Ranchero and a '55 Glasstop. The drive train is all-Ford with rebuilt 351 Cleveland and C-4 automatic from the 1971 Ranchero, but is installed such that an original 272/Fordomatic will drop right in. My builder used lots of good old American ingenuity and creativity, and the final product is something I am proud of. I have wanted a Bumble Bee since 1991, when I saw one at the National CVA Convention in Fredericksburg, VA. Finished in 2014, it was four years in construction. 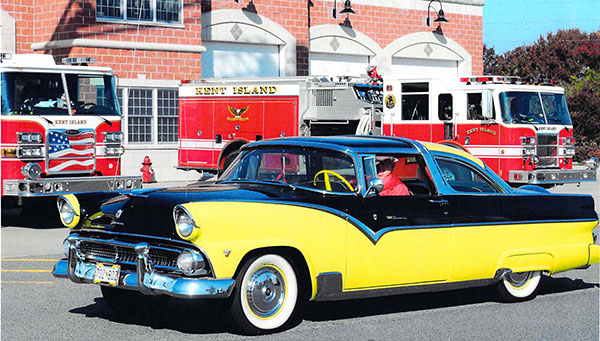 My love for '55 Fords began in 1963 when I was a senior at Seminole High School in Sanford, Florida. My first car, a'53 Plymouth Cranbrook, had been rear-ended by a Greyhound bus, and even though my driver's door said "CAUTION: BLIND MAN DRIVING", I won $200 in court. Add $225 to that and in 1963 I bought my schoolteacher driven four-door '55 Customline 6-cylinder automatic with 40,000 miles. I had saved all that money working for 25 cents an hour at my parents' A & W Root Beer Drive-In. As a senior at Florida State University (FSU), four years later, my '55 had 140,000 miles on it, and I sold it to another FSU student in 1967. Like some of you, I lost my cherry in a '55 Ford. It would be the late 1980's before I started getting back into '55-'56 Fords, with a series of 25 project and parts cars. My sweet wife of 37 years, Becky, was always tolerant of "that crusty old junk". We both worked paycheck-to-paycheck until 15 years ago, when I bought a solid '55 Sedan, which had had a Crown roof, welded on. Crown doors hung, and rear Crown windows bolted in. That project car 15 years ago cost $1,500 and it had a smoky 6-cylinder automatic. It killed every mosquito within miles whenever it huffed and puffed. Then in 2009,1 found Jack Evans in Annapolis. He assured me that with plenty of money and my accumulated parts, he could make my parts into a nice car. He had done two Crowns before, and he made mine stunning, after four years of part-time work.

Also, back in 1990,1 had bought a '71 Ranchero for $800. It had a 351 Cleveland and C-4, both recently rebuilt, with AC, PS and PB. The body was terrible, and when the brakes failed, I parked it. Its drive train now resides in my '55 Glasstop. Key Glasstop interior parts from Don Stickler helped to complete the package. A 12-volt conversion per instructions from the legendary Lee Reese combined with the magic of Jack Evans in Annapolis pulled it all together. 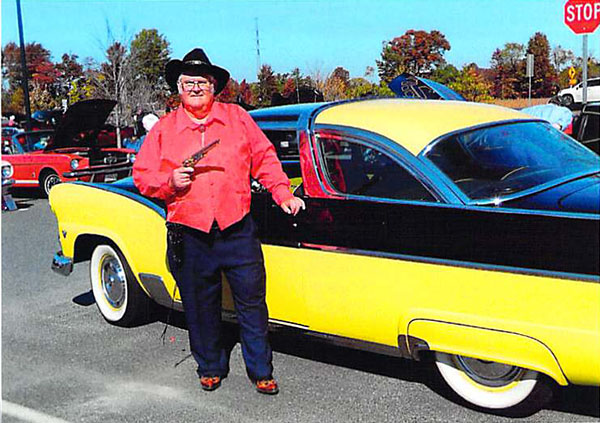 I had always wanted a Bumble Bee car-black and yellow. So stunning. I had seen a Bumble Bee at my first national CVA meet in Fredericksburg, VA, in 1991. There I bought a raffle ticket for the continental kit, won it, saved it for decades, and now it's on my Bumble Bee. Yes, I had lust for black and yellow, over two decades ago. A decade ago, l added a two-car garage in front of my existing two-car garage. I painted the inside garage door flat black. Then I had an artist paint the black and yellow I wanted, and next to it, a pink and white 1955 Sunliner. From the street, with the front garage door open, and the inside garage door closed, it looked like I had two dream cars deep inside. (Finally, now I do.)

Over the past 25 years, I have owned twenty '55-'56 parts and project cars. They were all cheap and most came with extra good parts, which I saved. I retired eleven years ago, then sold a rental house for a big profit in 2008, and finally had time, money, and parts. The Bumble Bee could now be built, starting in 2009. Yes, "it took a village" to make this car! A village of parts from many cars.

Plus more parts came from Toby and Sandy Gorny of Ford Reproduction Parts in Ohio; Dennis Carpenter, New Jersey Antique Radio Conversions, a Peter Brear glasstop, Mid-Atlantic Soda Blasting in Queenstown, Goodyear radials from Kelsey Tire, a new gas tank and glass from Auto City Classic, TeeBird Products gas and brake lines, heavy duty sway bar kit from Larry's Thunderbirds, and an all-vinyl black and yellow interior kit from Larry's Thunderbirds, and Chrome plating by Hanlon Plating in Richmond, Virginia. Craftsman Alfredo Sissi of Chester, MD, put the fitted seat covers (from Larry's Thunderbirds) on my seat springs. A salvaged Crown roof provided that key roof brace needed by all glasstops. Key glasstop parts came from Don Stickler. I bought black and yellow vinyl (like on the Sunliners), not the black and white cloth, which would be stock. MAACO in Salisbury, MD did the show quality paint. Jack Evans of Annapolis did the door panels and roof work and all mechanical work. 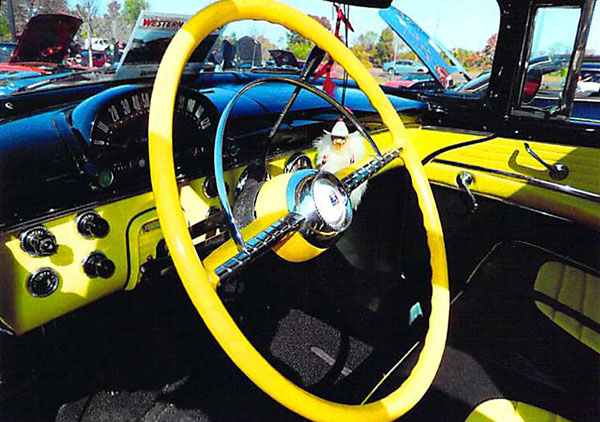 Gosh, that 351 Cleveland is peppy. As compared with the 35 1 Windsor, it has a longer block, wider main bearing caps, canted valves with valve reliefs cut into the pistons, canted valve train, larger valve springs with a more aggressive rocker-arm ratio, and larger intake and exhaust valves. Put the pedal to the metal and this Bumble Bee really moves out! Still, a 272 with Fordomatic would drop right in since no frame mount modifications were made.

Four shows, four trophies. I guess other folks like it as much as I do. Most photos were taken at the October 25, 2014 Kent Island Car Show sponsored by the Kent Island Cruisers. Their first meeting of this club was 21 years ago in our living room, and I was Editor of Cruiser News for nine years- good training later for my 13 years Editorship of Fomoco Times from 1998-2011. I still proofread all monthly Fomoco Times issues and dream up the Ford Funnies in order to satisfy my contorted sense of humor. Travis Sheaffer, our new Fomoco Times Editor, is doing a fantastic job. He deserves all the accolades which members give him. I am delighted that CVA has become more accommodating non-stock vehicles, trucks, Mercury’s, Canadian cars, and even Australian Utes. This will strengthen CY A and give a bigtent welcome to those of us who are still "Lost in the '50's". I am one of those in CVA's Sinatraville who "did it my way" and wanted to get a bit creative with my classic Ford.