Some time ago, in fact a long time ago, I purchased a 56 Crown, then I started to buy, repair, and sell 50’ Fords. Along with my brothers we set up a shop, paint booth and all – which was in one of my brothers garage. 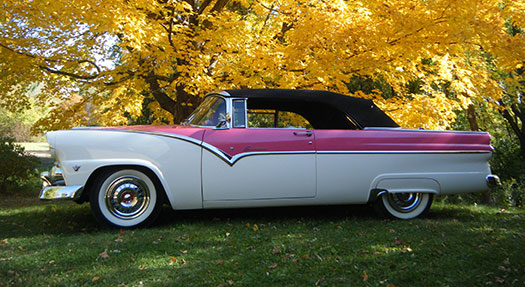 We did a lot of cards to different stages, we never called ourselves professionals, but the bottom line is we were darn good at what we were doing. We would do cars to different stages of repair. Some cars we would remove stainless, doors, hoods, trunks, etc. for a more complete job without actually restoring the complete car. I guess in some cases the true meaning would be, it don’t go but it sure does shine, would have applied. Bottom line, what you got to spend is what you get. That is still true today. Working on cars was our hobby by trade. Myself and three brothers own our own construction company.

As time went on other cars came into the picture:

I know I am mostly talking to Ford people as I am, but let me tell you a little more about my brothers GTX. On the way to Lake Milaca fishing for a weekend, with us is a 15ft Tri-hull with a 85hp engine, trailer, 4 batteries, gear and 4 men in the car. I figured we were towing in excess of one thousand lbs easy. While cruising along at approximately 60 mph (speed limit 70) this van pulls up alongside us. I am on the passenger side, driver rolled down his window; he asks if we wanted to run em. I looked at my brother and he gave me the thumbs up. The driver says lets come down to 20 mph and count to 3. I said ok. My brother already knows the program; he is down shifting at 20 mph. The GTX is now in second gear. Here comes the count down. We are off and running. Unbelievably enough, the van for a small jump on us. However, the GTX is smoking tires and the tires very rapidly caught up to engine power and third gear. This race is over. We never found out what was under the hood of that van, but I know it was not our everyday 6 cylinder van. He is 5 car lengths back at about 75 mph.

If you have ever been in a high performance car, you know what I mean. The power is awesome. The sixties high performance cars were and are impressive, even if you are only a 50’s Ford person. I did own a 64 Ford Galaxie 390 4 speed, brand new. That is as close as I got to owning a high performance.
I still have my first 50’s car. 56 Crown, and my last total restored 55 convertible.

The convertible owns first place and best restored Ford at Ford Motor Company, Waconia MN. I have enjoyed owning and working on the 50’s cars and meeting a whole bunch of great people. I have been a Crown Victoria member for as long as I can remember.

Now I drive my cars whenever I can, enter in some shows, and just enjoy them. I stared buying F150’s quite a while ago.

I have enclosed some pictures of my convertible start to finish.