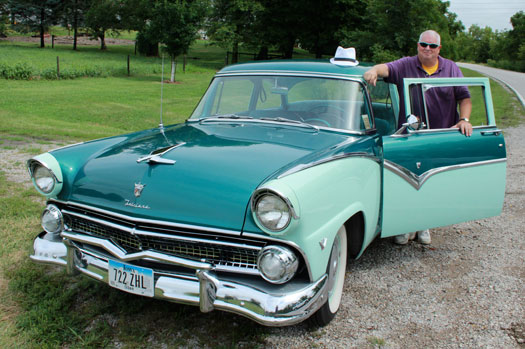 We were always a Ford family. Our family car when I was a child was a 1956 Customline. My father drove a 1955 Mainline 100 miles for his daily commute. So as a child, that image of a car, that specific 1955/56 Ford shape, is what was instilled into my psyche - THAT is what a car looks like.

My next younger brother and I were close in age and had a lot of similar interests. Inspired by the 1973 movie American Grafitti, we decided to fix up our grandfather's - by then abandoned - 1957 Custom. We thought all the 50's cars in the movie were so cool. (Sadly, by then the '55 and '56 were gone.) With help from our father we got the engine rebuilt. We spent $300.00 of our hard earned cash from jobs at the local grocery store on body work and a black paint job. Adding chrome slot wheels, shackles, air shocks, and some 60 series tires to the back and we were pretty sure we had "the bitchin'-est car in the valley."

I soon decided to pursue a profession outside the retail grocery industry so went off to Iowa State University in fall of 1976 - initially the '57 was my college car. Before I finished school in 1980 with an engineering degree a lack of funds meant selling the car to yet another brother.

Fast forward to 1986 and the original brother finally found his dream car; a first generation Mustang 2+2. Pretty soon I caught the Mustang bug and obtained a '65 Mustang convertible. Education and a steady job had its perks!

We enjoyed our cars immensely the following years. We joined the local Ford club and I remember telling one of the guys in the club with some connections, "If you ever find a nice 2-Door '55 or '56 Ford, let me know. I'd love to have one." 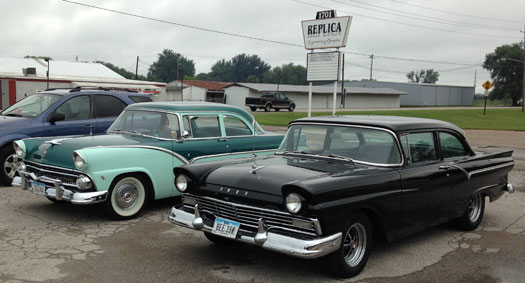 I retired in 2011. I imagined in retirement I would enjoy the convertible a lot more, but actually never much drove it. By then I'd added a 5 Speed '89 5.0L GT convertible to the stable - such a fun car to drive! Then, talking to my brother, he also said he did not drive his 2+2 much anymore either. So we decided to sell our ponies at the 2012 Mecum Auction in Des Moines.

Sad as I was to see the '65 Mustang go, I was looking forward to having some garage space. Honestly, I had no intention of bidding on or buying a car. Famous last words... So there was this 1955 Fairlane at the auction. I loved the nicely optioned sedan with two-tone green paint, low mileage, and original Y-block engine. So I told myself, "If this goes for less than X dollars I think I'll bid on it." The next day the Fairlane rolled across the stage. One bid. Then I bid (my limit). Then another bid and the bidding stalled. No sale - minimum bid not reached. "Okay, I thought, glad I didn't get all emotionally attached." Pretty soon an auction floor worker came over and told me the seller dropped the reserve and that the highest bidder declined - which is evidently allowed since the bidding was halted by the reserve. Would I still like the car for my bid? I said, "Yes," and the car was mine - after I turned in my Mustang check and they issued me a new, albeit smaller, one.

Next day we drove the car home (140 miles) without incident. Got a little warm, but not overheating. When I got home the first thing out of my mouth was, "It followed me home, can I keep it?"

A few minor issues: Sometimes the car just didn't to want to start. Turns out someone put the battery in backwards, thinking the car was a negative ground vehicle. Since everything worked as wired up I just switched the leads on the coil and from then on the car starts great. Got stranded once - the carburator float stuck from small rust particles, flooding the engine. Cleaned it out and added an inline filter and no more problems with that. It continued to run hot-ish, so changed out the radiator for an aluminum one and changed the fan from the 3-blade original to a 6-blade unit and the gauge now tops out half way up. Two years later the car finally feels reliable.

We drove up to Madison for the CVA event this year - just for the day since I had obligations later in the week. The round trip is 300 plus miles and the old girl made the trip with out missing a beat.

Meanwhile, my younger brother who bought the '57 custom re-did the $300 paint job - and a whole lot more - and has brought the car back to form, so we each have our '50's rides. His having been in our family since new.

We put together a music video with both cars, but featuring the Fairlane, with a good friend from ISU (a professional photo-journalist). We did it just for the fun of the experience and to be creative. If you overlook the acting, it's actually pretty entertaining. The song is "Getting Out of Muscatine"; Muscatine is the small Mississippi River city in Eastern Iowa where we grew up.

So lucky me - it followed me home, I got to keep it!