I have had the pleasure of owning two 56 Sunliners over the years. The first one I bought when I was in college just before graduating in the mid sixty's. A friend needed money and I paid $250.00 for it. It was what I call "orange" and white and I really did not like the orange. At the time I worked at a Ford dealership and had access to the body shop. It soon became red and white with new seat covers to match. I drove it for a while and then planned to get married so I sold it for $500.00. I thought I made a fortune. The "kid" who bought it wrapped it around a tree very shortly and so ends the tale of the first Sunliner. 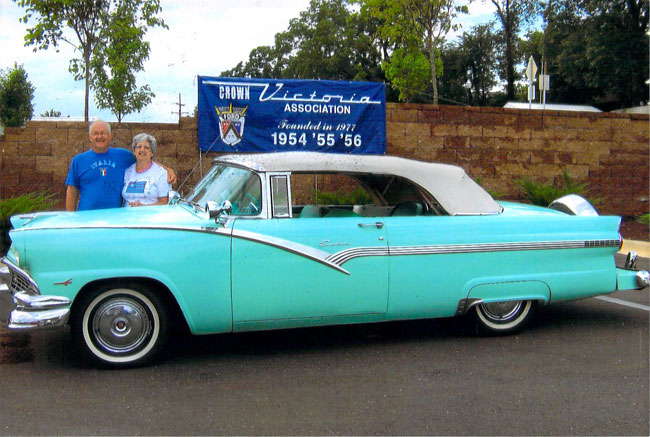 Several years later I started to realize that selling the Sun liner may not have been the best deal ever made. I found another one stored in a shed that gave new meaning to the words basket case. And believe it or not I paid $250.00 for it. Long shackles had been added to the back with big chrome reverse wheels. About everything that was not absolutely necessary under the hood had been removed. So began about a ten-year search for things like a heater core and the like. It had a floor shift that worked upside down. Flipping the arms on the transmission solved that problem which was one of the easier fixes in this whole project. Two big bucket seats graced the front so began the search for a front seat. Not just any front seat but the Fairlane seat with the notch in the middle. And a 55 or a 56 will work but there is a little difference.

After about ten years of looking at the car in the shed I decided that it was going to be put together and run. It was painted Meadow Mist green or something close to it and a new white top was installed. Other things were done and I drove it for a while until the front cross member caught my attention and it was back up on blocks. It became almost a new car from the windshield wipers forward. New bushings and ball joints and a new rebuilt cross member were installed. The car came with the 239 V-8 from a 54. This was replaced with a rebuilt 292 with the stock 4-barrel. At the same time the three speed was replaced with the three speed with overdrive. I really liked those overdrives when I was a kid.

Since then I have continued to put my beer money, well some of it, into the car. I am a believer of upgrades that do not alter the appearance of the car. Here I will possibly part ways with the true stock aficionados. I have installed electric windshield wipers, dual cylinder disk brakes, electronic ignition, brighter headlamps and taillights, seatbelts, to mention most of them. The owners of these cars of course know the difference but to the casual observer the appearance is stock. I like driving with disk brakes for example having more confidence in my ability to stop. Stopping is good! It has been a work in progress since the seventy’s. It is possibly time to start over with such things as new paint. I may be able to sell this one for more than I paid for it but the way my son and grandsons look at it I think it will be in the family for a while yet.