I bought this very 1954 Ford Sept. 23, 1954 when I was 19 years old for $2,169 from Carson Motor Co., Gibson City, II. I traded in a 1950 2-door Ford for a difference of $1,250. I trusted my future wife to take a carload of Female classmates on their senior trip to Wisconsin Dells before it was a year old. She made it home safely without a scratch. My wife and I dated in this car, went on our honeymoon to Eureka Springs, Arkansas. We brought our new born daughter home from the hospital in 1957, two years later a son and five years later another son. 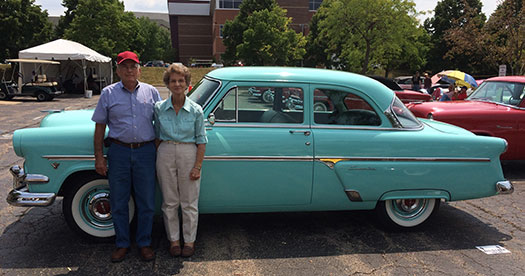 The last license tag on the car when I parked it 1965 with 95,000 miles on the odometer. No major work was done on the car, just oil changes, tune ups and brakes. It sat for almost forty years. Fast forward to 2004 and I had retired and needed something to do, so the restoration began. After two days of removing rusty parts and bolts I thought, do I really want to do this? It was too late to turn back by then. The first project was to weld in the new rocker panels, floor pans and new floor braces. I then removed the body and had it sand blasted before taking it to a local body shop to have the finishing work done. The body man painted the interior, firewall, door frames and inside of trunk.

While the body man was working on the body, I stripped the chassis down to the bare frame, had it sand blasted and powder coated. The assembly began by installing new brakes, wheel cylinders, stainless steel brake lines, new wheel bearings and rebuilding the differential. The front suspension was all bushed as well as the rear springs with new anti squeak pads. The next thing was to rebuild the engine. Being a mechanic by trade, this came easy. I stripped the engine down, had the cylinders bored to .030 oversize and the crankshaft ground to .010 undersize. Installed new pistons, rings, bearings, camshaft and rocker arms. The cylinder heads were taken to a machine shop to have the valve guides redone and new valve seats installed. After the engine was finished, I rebuilt the transmission and steering gear box.

We now have a rolling chassis with new Coker tires ready to take it to the body shop to install the body on it. After the body was all bolted down, doors and fenders installed it was time for the final paint job. It is now time to install the drive train and new interior. The final touches were done and time for a test drive, which went well. 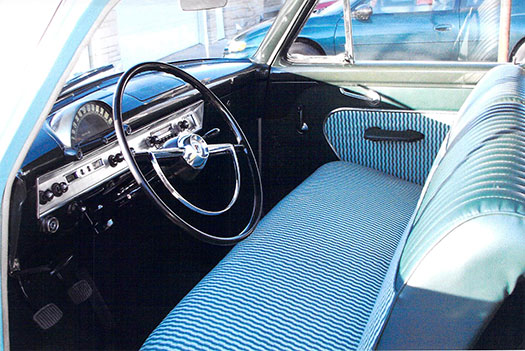 My wife, JoAnn and I went on our honeymoon in this very car 58 years ago so we decided to go on the same trip to Eureka, Springs, Arkansas on our 50th wedding anniversary. The car wasn't quite done so we went on our 51st. On our way to Arkansas, we stopped at the Cracker Barrel in Springfield, II. for coffee. When we went to leave, I started the engine and heard a noise. The starter drive locked up and would not release. I called an electrical shop in Bloomington, II. and he had a rebuilt starter with a drive. I removed the starter in the parking lot and JoAnn and I pushed the car by hand to get it started. We drove the car to Bloomington with out a starter. Installed the starter in the parking lot and away we go again. We went about a hundred extra miles that day, but we made it to our destination for that day. Now I have an extra starter for a back up. When we were on our honeymoon in 1956, we stopped in Springfield, II. the first night, shut the engine off and the red generator light stayed on. I had to disconnect the battery cable to turn it off. The next morning we went to leave and the light still stayed on. We found a Mercury dealer in Hamel, II. who removed the generator and installed new brushes for a total of $5.92 Guess we should avoid going through Springfield. Later on that day, we were going down one of those big hills in Missouri listening to the twin glass packs pop and crack when letting off the accelerator and a Police Officer pulled us over and accused us of speeding, which we weren't. Just sounded like it. He found out we were on our honeymoon and just gave me a talking to about endangering the life of my new bride by speeding, then let us go.

The rest of the trip was uneventful except when getting close to Springfield, II. on the way home, we ran out of gas. Used to do that a lot before we were married, but was for real this time. This car is not a fancy car like a Crown Victory, but holds a lot memories. We still enjoy it today.