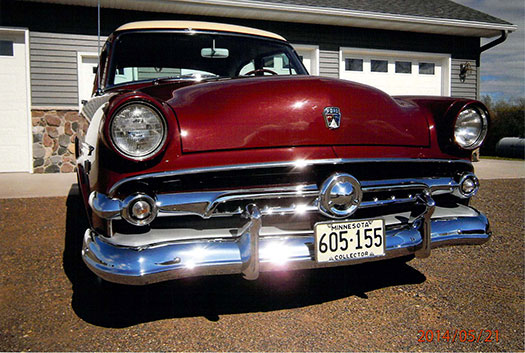 In 1964, I purchased my first car, a 1954 Ford Customline 2 door sedan. The car was familiar to me because it was driven by a friend of my brother. The driver's older brother had driven it before him and modified it by replacing the original 6 cylinder engine with a younger Y-block V-8 with a 4 barrel carburetor, converted the 3 speed OD transmission to shift on the floor, and added a dual exhaust system.

While those brothers modified and drove the car, their father who had taken delivery of the new 1954 Ford on February 16, 1954 at Burnham Motors Inc. in Beloit, Wisconsin retained ownership. When I took ownership of the car, I became the second
owner, but the fourth driver.

As I drove it for the next four years, I continued to change, modify, and repair. Chrome vvheels, bucket seats, and a 4 speed transmission were among mid-60's changes. Although my style of driving mandated some mechanical repairs, there was no body work caused by accidents on my account. Recent restoration work revealed body repair from a minor accident or two prior to my ownership.

Temporary storage in my mom's garage in 1968 became long term. Those of us labeled "baby boomers" can identify with what happens next: marriage, military service, babies, family living, children's school activities, and so on. My path differs from many in that no matter how many activities and location changes, I was able to keep that first car. Not only did I keep it, luckily it was always stored in an enclosed garage with a concrete floor.

After bringing the car to Minnesota from Illinois in 1978, it remained garaged in a Minneapolis suburb for 32 years. Restoration began shortly after moving to our current residence in Cambridge, MN in 2009 with garage space dedicated to that purpose. The following list is partial both in description of the car and suppliers, services, and individuals involved, but should give readers a " flavor." My hope is that it brings back memories of the mid-60's as a period street machine.