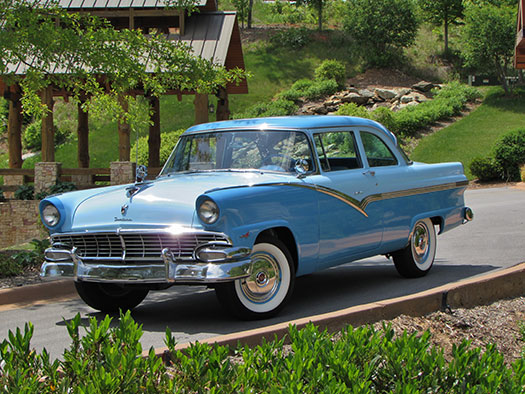 The year was 1966 and I was just married to my high school sweetheart when Uncle Sam felt he needed me more, and beckoned. Being a red blooded American boy used to watching Glenn Ford and Audie Murphy movies, I felt compelled and obligated to comply. I ended up in Colorado Springs to train in artillery, and later, a short tour of duty in Viet Nam with the First Cavalry.

When we finally acquired our first pass to town after basic training, my comrades and I enjoyed the freedom of exploring the breath taking beauty and ambience of the Colorado Springs area. Each of us, it seemed, had our own ideas of what freedom meant. Even though I could appreciate a good dancing girl as well as anyone else, being recently married, I elected to investigate less frivolous activities like seeking out the now endangered “JUNK YARD”.

I have always had an obsession for the ‘56 Ford having come from parents who, in 1955 went out and ordered a matched pair of ’56 Victorias both Fiesta red and white, painted in opposing color schemes on the cars. I had my first ’56 Victoria at age 15, and by age 16, had created a fine amateur custom to dazzle the other kids at school.

While on one of my almost nightly excursions through Colorado Springs, I spotted the car I had been seeking. It was a ’56 Club Sedan and it sat behind Vern Lauer’s Texaco on North Platt Avenue. Bermuda and Diamond blue, it appeared as if in primer, for the old boy who bought it new obviously never waxed it. The paint, however, with the exception of a little “sandblasting” that naturally occurs on western cars, proved to be in excellent shape after it was rubbed out. This car came with a 292 4bbl.and factory standard. The body was exceptionally clean and solid, which is typical, I’ve found in cars from the area. Imagine my excitement, coming from New York where road salt had already destroyed these beautiful cars before their 5th birthday! 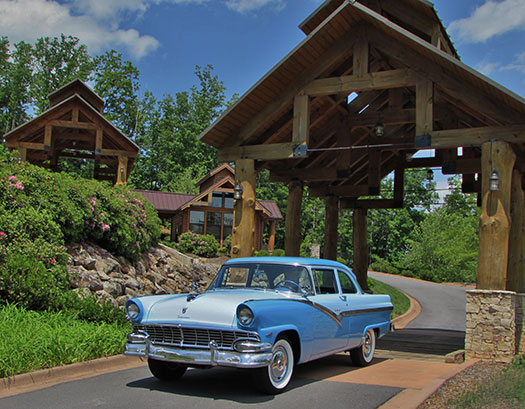 I approached Vern on the car , and he said that he really wasn’t interested in selling the car, for he was using it as a courtesy car in his business, but for a staggering $295., he might be persuaded to change his mind. I didn’t even feel the need to negotiate price. I immediately called home and had my Dad sell a “56 hot rod I had at the time, and send me the money and the car was mine!!

Shortly thereafter, I was sent to Viet Nam, so my wife and I loaded the old Ford up and headed home for a 30 day leave before going over. I must say, that 1900 miles was an adventure! It seemed as I found out later, that a frayed wire at the coil resister allowed the car to “cut out” periodically, causing a resounding BANG! So Sorry, Manhattan, Kansas, at 1:00 AM, November 27, 1967!

My Ford and I have been together now for 23 years; a testimony to unparalleled loyalty since I have been through two marriages since then, and my kids have grown and moved away. My Ford is my connection to my youth; a liason to the past, a veritable reflection of the good times in my life. *I had it painted last year, Same colors, my gift of love and appreciation*

24 years after first appearing on FOMOCO Times cover, I still have my Club Sedan. After moving to the foothills of the Blue Ridge in North Carolina from Naples, New York in 2007, it had been in garage storage here until last year, with only periodic starting, and trips around the block when the Troopers weren’t looking. One day, however, on a routine start-up, the left bank started to smoke and wouldn’t clear up, all the while reeking of stale gas. SHAME ON ME The smoke turned out to be steam, and need I say more? After dealing with stale ethanol gas, the head gasket had eroded at a cooling port. Even though I kept stabilizer in the tank, I guess it’s time was up. In addition to the head gasket, the upper tank on the radiator was also a casualty. Shortly thereafter, I became fully retired. GAME ON. Off came the front clip and all the front and rear suspension. Kind of overkill for a valve job, eh? Well, being just down the road from the old North Wilkesboro NASCAR track, I recruited a veteran race car machinist at Blue Ridge Machine shop to check out and rebuild the ’57 heads. After magnifluxing, grinding and lapping the valves, new springs, valve guides, and pushrods, I was back in business. He just did a masterful job at a discount price; it seems it was good to work on a “Y” block again. ”Like old Times” I can’t say enough good about him! The boys at “Miller’s Hot Rod Barn” in North Wilkesboro pressed the new bushings in my “A” frames, and I proceeded to rebuild the front suspension to include a new crossmember and springs. I installed new brakes, wheel cylinders, lines, bearings and seals front and rear. The gas tank was removed, cleaned, sealed, and painted. While the tank was out, I cleaned and painted the undersides of the floorboards, trunk, frame and inner fenders. It is remarkable what great shape everything was in under there. It only took some cleaning and some light sanding to paint everything up better than brand new. I think that in all the time I’ve owned the car that there was probably only about 4 times that I got caught in the rain while cruising. It better stay that way- the vacuum wipers finally said “no way”. After having a new aluminum radiator scratch built by a shop in High Point North Carolina who makes radiators for NASCAR, Harry Gant’s shop in Taylorsville rebuilt the rear end. They did a wonderful job, and it never sounded so good. 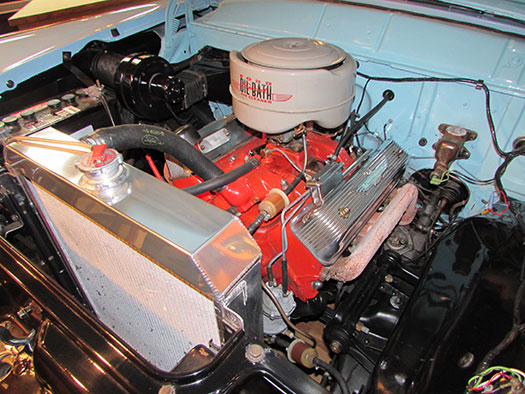 Joey Billings at “Impact Collision” in North Wilkesboro painted my front fenders as long as they were off; they had a few stone chips and scratches over the years. Joey was able to computer match both colors and it came out perfect; Including the gloss, which is impressive since the rest of the car was 16 miles away. After a total under dash and engine compartment re-wire, I painted the dash and window frames, new carpets and kick panels. The rest of the interior is original (pending future lottery winnings). Note my custom door panels; my solution to a ragged set of original panels whose lives are now extended thanks to a trip to Auto Zone,15 bucks, and a perverted imagination.

The original order for the car is interesting in that it came in the Fairlane package, 292 w/ 3 speed standard, small hubcaps, manual steering, no radio, padded dash with no interior sunvisors, (still has original cardboard block off pieces), yet has tinted windows all around. (Still there, Ford script, all original) After a few new plastic emblems and minor chrome goodies, I think we’re good for now. I sure hope so; everything I did personally was done OLD SCHOOL on my back on the creeper. It took as much time getting up and down as did the rest of the job.

My Ford is a true survivor; maintained and reconditioned over the years, not restored, the financial resources just aren’t there. The interior, chrome, drivetrain, glass are all original to the car, and all the numbers match. It still has it’s issues; chips, scratches, squeaks and rattles, and after a trip to the mountains this weekend, I once again realized it ain’t no Maserati. It will always be my driver- we go back a long way-(48 years). A lot of water has gone under the bridge since we first appeared on the cover of FOMOCO Times in January, 1990. We’ll spend the rest of my life together, even though it’s apparent that from now on it will get better care than I will.