Frank La Forge of Wichita Kansas has been named a 'Meguiar's VIP Sponsored Car' for 2014.

If you DO NOT like reading about 'Resto Modded' Fords - you need to move onto another story in this month's FOMOCO times. However, if you like to read about how your fellow CVA members have taken the classic Ford's of the '54-56' era and made them into safer, more reliable and true pleasure driving experiences then please read on. 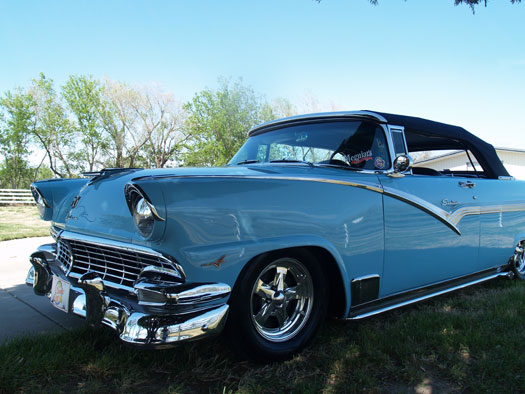 First of all I built my '56 Sunliner to be a car of the highway as well as a car show beauty. Since I purchased it in July of 2000 (a mere shell of a car with a plethora of potential to be a real head turner), I have transformed, and molded it to be 'mine' with an eye on the open road. Some of you may remember, from previous stories, of this car that I purchased it from a California man who had begun a full restoration but stopped well short of his dreams of this Sunliner, and was forced to sell it 'as is' (and you all know what that generally means).

As of last summer, my (excuse me 'our'), Sunliner (my wife Sharon also gets a lot of credit in this endeavor) has been shown in 18 states, and we always drive it. We love getting it out on the road, and letting other people enjoy seeing it "in motion" instead of simply looking at it in static form. Sometimes it takes a half hour or more to simply stop for gasoline because of all the admirer's you get - and that is OK with us. A SIDE NOTE HERE: Every owner should let someone else drive their car, at least down the street or around the block just so they can see what it looks like while it is moving, you will gain an entirely different appreciation of your classic when you see it in motion. It was several years after my original purchase before I happen to notice just how sleek my '56 looked while it was being driven. My son in law had taken my grandkids for a ride around the block, and as he drove away and returned I had a completely new admiration for its beauty. So much that I had him drive it on the road while I drove along behind and beside him. "Now that is just too sexy" I said to myself.

But for this article let's talk about Restomod's and why they are so popular. Restomod simply means "restoring and improving". You take a great classic like my '56 Sunliner and use today's technology to enhance its safety, comfort and performance. You can achieve the same classic looks but at the same time have all of the latest bells and whistles along with the peace and mind of a more modern car. Performance, Safety, Engineering, and Drivability are the mainstays of a Restomod.

PERFORMANCE: Personally I kept my 312 Y-block for nostalgia reasons, but I updated it during its initial overhaul by balancing , blueprinting, and installing hardened valve seats. Then I replaced the old cast iron intake with a polished aluminum 'Blue Thunder' unit which sits under a new Holly 'Street Avenger' 750 carburetor. I also added a Mallory Unit-Lite MSD type ignition system, along with a Road Draft Tube, and custom built headers by Jerry Christenson. The Road Draft Tube was an option I believe used on most Thunderbird 312's to help the engine breath. Kinda like a PCV valve; it reduces the 'blow by' to almost nothing.

SAFETY: I added seat belts, and even though my car came with power brakes, I had a more efficient system installed including disc brakes in front along with a dual master cylinder and an alternator was also added for a more reliable charging system. A complete Ron Francis wiring harness was installed to replace the original decaying wires and to protect against circuit overloading. Where rubber meets the road is one of the most important safety factors in driving, so I replaced my bias ply tires with Goodyear radials.

ENGINEERING: A Mustang T-5 transmission was installed replacing the "3-on-a-tree" unit. In addition to more efficient fuel economy due to the 5th gear overdrive function, a 5-speed is so much more fun to drive, and draws a lot more attention from admirers. A 4-core Griffin aluminum radiator was installed, along with a Vintage Air/Heat system which vents through-the-dash.

DRIVABILITY: Structural enhancements are always welcomed when you drive any classic on the road. My undercarriage has taken on reinforcement of left and right rear rocker panels, and I had the body attached to the frame in four additional points for stability. Sound deadening has been added to the firewall, doors, trunk and under the carpeting, along with under the chassis. Heated seats are a blessing when the top is down for late night cruises. A gage cluster of Oil pressure, Water temperature, and Volt/Amps hangs under the dash to help me keep a more accurate eye on vital conditions. A power steering system from a 1982 Granada replaced the original factory unit giving me finger tip control for effortless turning.

Another aspect of a Restomod is changing the cars 'stance'. I lowered it in front by installing 4" drop spindles, and 3" in the back by reversing the leaf springs. Ride comfort was not compromised due to the strengthening of the under carriage as mentioned above.

The main reasons we drive our Ford 'Across the USA' (apologies to Dinah Shore and Chevy fans) is to partake in 'car shows', thus our car is also a full fledged 'show car'. It has a very deep Diamond Blue lacquer finish (PPG code DCC 11770) along with a dark blue 'sta fast' fabric top. I have added '55 Ford Eyebrow headlights, Boyd Coddington polished aluminum wheels, '55 Ford deluxe side mount rear view mirrors, '55 Mercury station wagon tail lights, functional Lake Pipes, lower body fender stainless splash guard trim, light pin striping, I even chrome plated the aluminum Thunderbird valve covers along with the alternator. The air cleaner is a 'Gord McMillan' polished aluminum unit with the same logo as the valve covers. The interior uses the original seats with superior packing and a slight custom notch in the front to allow for the 5-speed shifter. The seats are covered in custom tuck 'n roll Naugahyde as are the side panels. The carpeting, and floor mats were also custom sewn to fit perfectly. The convertible boot was custom sewn using the same 'sta fast' material as the top. I added the 3 sewn-in appliqués you see in the pictures and they are a constant topic of conversation as are the 'Saddle Shoes' hanging from my rear view mirror.

As a side note: My (our) Resto-Modded Sunliner is also considered a Street Rod; in fact our invitation and consequent showing at the Hilton Head Island Concours d' Elegance & motoring festival in 2009 was displayed in the 'Street Rod Class' where it won a Yellow ribbon in the driving tour portion of that show. The NSRA's definition of a 'Street Rod' read in part: "a car which has been modified by using and adapting parts from other cars to enhance the drivability and appearance while retaining most of the appeal of an old classic car 50,60 and even 70 years old". 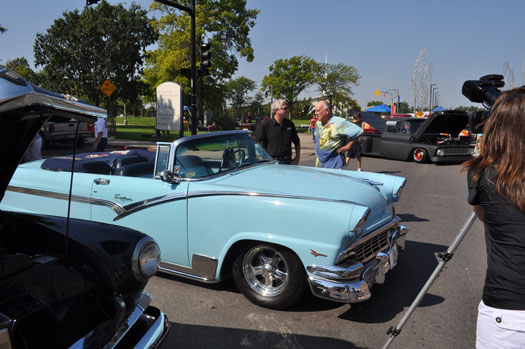 The speedometer has logged over 31,000 miles on the engine since the 'initial' restoration began back in early 2001. However, I have driven it between the subsequent stages of its 'Restomodding' projects. During the cars first 12 years in Wichita, something was modified, added or corrected every winter. I believe that I have now come to the point where I am finally finished with molding my Ford into exactly what I want it to be because I have not added anything to the car in the past 2 years. That statement sounds kinda like a drunk on the road to completing a 12-step program but I truly believe I have finished my Sunliner completely!

I have used the FOMOCO times to guide me in product selection through our advertisers and 'membership' parts and miscellaneous for sales columns including: FRPS, Bob's Fords, T-Bird products, Mac's, Larry's Thunderbird, Auto City Classic, and Concours parts. Our advertisers, in addition to being a great source of products provides the necessary revenue to keep our magazine going and I use them whenever possible.

Back to the initial headline of this story; back last summer Meguiar's Car Care Products had one of their traveling trailers at the Black Top Nationals in Wichita Kansas. I have always used Meguiars products to help me protect and enhance the appearance of my Sunliner, and while I was talking with one of their representatives, I mentioned that fact and showed him a picture of my '56. He asked me if I had it at the show and if I could take him to it. So, I led him to where it was displayed. He liked it so much that he told me that I should make application to be one of their VIP Sponsored representatives. I filled out a rather lengthy questionnaire, and mailed it in along with a set of pictures and accomplishments (major awards, magazine features and other printed stories), and how I always drove my car on trips to 'show' it.

In February of this year I was pleasantly surprised when I was awarded this prestigious designation along with a nice plaque and a four shelf's worth of Meguiar's premium products.
I also get to park with the Meguiar's trailer when I attend a show in which they are vendors. I am not sure how many show cars have this distinction but in all of the 18 states, and hundreds of shows I have been involved in, I have only seen this 'Sponsorship' decal on one other car, and from what I have been told this award is a 'First' for a Wichita area car. I would like to hear from any of the our CVA readers if they have been part of this program. Please see below my initial letter from Meguiar's.

My current license tag, which is registered to the car; was actually purchased on Ebay from a guy in Wisconsin. I accidently found it while searching for a '56 tag from Georgia. It is even from my county (Sedgwick). The state of Kansas allows antique car owners to register an original license tag to their car if it is from their county and the year of the car is the same as the tag. This tag is unique in the respect that the first two digits depict the year and the last 3 digits depict the displacement of the Thunderbird engine in my Sunliner.