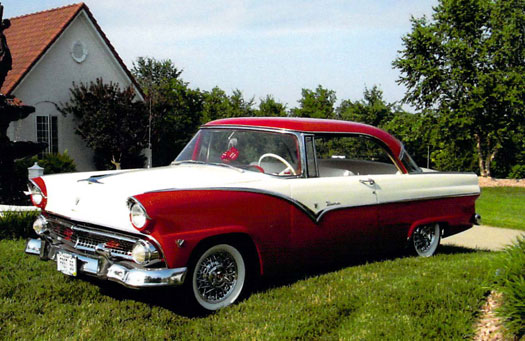 Perhaps part of the reason those of us who enjoy owning old automobiles are that we can relate history to them. Ford, Chrysler, Buick, Oldsmobile, Studebaker, Tucker to name a few were people who lived in our great country of the USA, and like each of us, had a personal history during their time. The following story encompasses some good times and some rough times. The motivation for writing this was provided by people who after hearing the history of this car would enthusiastically ask me to share the story with others. As I initially penned this article, I realized that the amount of material written could be lengthy. Hopefully, I’ve condensed this story to an acceptable length. I hope this is as enjoyable for you to read, as it was for me to write. Enjoy!

I was 8 years old when my mother took delivery of a new 1955 Ford, 2-door Victoria from Southtown Ford in Kansas City, MO. It was her first brand new car. The car became an essential part of our family for the following decade plus years, and when I turned 16 in1963, it became my first car. Years and miles passed, in-town driving turned into out-of-town travel; to and from college as the car continued to provide transportation.

Then in the fall of 1969 on a cold rain slick road the car was involved in a “rollover” into a roadside ditch. In 1969, 14 year old cars weren’t worth a lot of money, but if they were wrecked, the term “total loss” was commonly used. Remember, however, this was my first car and I wasn’t going to put it in the junk yard; so I proceeded for the next 30+ years to find places to keep my wrecked car so that one day I could repair it. It rested hidden behind buildings, barns and in garages waiting to be repaired.

The year 2002 marked my 55th birthday and realization that my dream of repairing my first car probably wasn’t going to happen. So an ad was run in an old-car trade publication in the hope that someone else would purchase and repair my car. Mr. Bob Nolan of Elyria, Ohio, contacted me and purchased my car with the intent of repair. With a large amount of sadness on my part the sale was made. I was consoled with the idea that at least my car, even though it would no longer be my car, would be repaired.

Shortly thereafter came the day when Tim Nolan, Bob’s son and Scott Enees arrived to take my car to its new home. The car and many items I had accumulated over the years to help me repair my car were loaded into trucks and secured for the trip to Elyria, Ohio. After paper work was completed, questions were asked and answered and quite a bit of conversation was enjoyed, Tim, Scott and I shook hands and I watched as they drove away. I can honestly say the remorse I felt at that moment was calmed by meeting Tim Nolan. He is an honest and good man. You never have a second chance to make a first impression, and meeting Tim assured me that what I had been told about my car being repaired would come true. As they went out of sight, I felt a door close on my youth. I felt I had done the best I could for my old car and it was time for me to move on.

Another 10 years passed until September 2012 when upon arriving home after work I heard my wife Martha talking on the phone. I remember her wide-eyed expression as she spoke. “Why yes Bob I remember you. You bought Jim’s old Ford. He’s doing fine and he just walked in. Would you like to speak with him?” As Martha handed me the phone, I had no idea that the furthest thing from my mind was about to happen. Bob and I talked for a bit as Martha listened. She had a premonition that had escaped me. And then Bob said, “Jim, I remember that you seemed to be a sentimental guy. I’m kind of sentimental myself. That’s why I’m calling you. I’m thinking of “thinning the herd” and I was wondering if you would be interested in buying your car back?” He spoke further of the car and modestly stated that my car was not a “concourse restoration” but had definitely been repaired to pre-damage condition. He had remedied the discrepancies caused by the “rollover” and by all account the car was greatly admired by everyone that had seen it.

Possibly because I had “moved on” from the car, or maybe realizing the many things that would be required in reacquiring my car, the opportunity that was before me didn’t register till memories started to return. Martha and I had our first date in that car. I had learned about car repair by working on that car. My siblings and I had grown up in that car. And so, after many conversations and much preparation, a friend, Ross Whitney and I were on our way to Elyria, Ohio to repurchase my first car. I will always be grateful to Ross for helping me because he is an individual possessing vast knowledge of automotive expertise, and his job on this trip was to provide an opinion as to whether my old car had been repaired correctly. In other words, I needed an objective opinion on which to base the final decision. 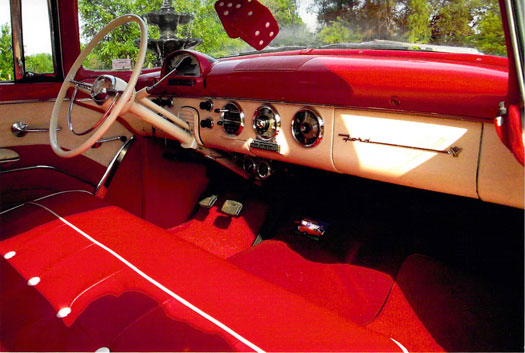 You should realize that I had never formally met Bob Nolan in person, since his son Tim, actually picked up my car in 2002. As I said before, you never have a second chance to make a first impression, and like his son Tim, Bob is an honest and good man. Additionally he is a self-made individual possessing the talents to do what is necessary to return a damaged vehicle to its former like new condition. He and Tim had done what I had dreamed of doing to my car. It was beautiful! Bob had been “modest” in his description of my car. That is to say he was delivering to me more than he had promised. The more I inspected my car the more enthused I became about repurchasing my car. Somehow during the entire repair Bob, kept my college parking registration, my Kansas City Chiefs decal that I purchased as a freshman in high school, and my college logo decal proudly displayed in the rear window. The “Smitty” mufflers that I had installed when I was 20 years old were still on the car and sounded just as good as they had the last time I had heard them. The same ignition keys and key fob were in the ignition. The same AM radio worked. The original owner’s manual (although a little weathered) was still in the glove compartment. The damage from the “rollover” was repaired, and everything else was exactly as it was the last time I had driven the car.

Did I say Bob was delivering more than he promised? Also added were more improvements such as a period-correct Borg Warner overdrive transmission, 12-volt conversion utilizing an alternator versus generator, dual master cylinder for improved braking and more. The final reassurance came from my friend, Ross. He had been inspecting my car as well, and when I asked what he thought, he replied “you had better buy this thing before Bob changes his mind!”

So once again, paperwork was completed, questions were asked and answered, quite a lot of conversation was enjoyed; we all shook hands and loaded my car onto a car hauler for the trip back to Missouri. Since then, Martha and I have enjoyed the car immensely. I have enjoyed “personalizing” my car to how it looked in the beginning and even though distance prohibits spending much time with Bob and Tim Nolan, a new friendship has been established via occasional phone conversations.

When I think about my car, I reflect on the past in regard to the things that had to happen in order for me to reacquire the car. I’ve heard people tell me about their first cars and the fond memories they provided. To reacquire one’s actual first car is to say in one of Bob Nolan’s favorite words, “Sweet!” I’ve heard of it happening to others, but when you think about it, the odds of reacquiring one’s actual first car are slim. But if one would desire to enjoy those memories, it can be done.

Recently I observed an old high school friend driving what appeared to possibly be his first car. As the car drove past me I observed the personalized license plate: “HAD 1B4”. And yes, the memories his current car provides are also “Sweet!”

Finally, it would be difficult for me to thank all the people that helped make this possible. However, I’d like to at least list the first few: my sincere thanks to Mom, Martha, Bob, Tim, Ross, etc. etc. etc.