My love of 1954-56 Fords began when a man in my area bought a 1954 glasstop (he also bought a 1955 and 1956 glasstop new.) My friend and I would spend almost every Saturday morning at the local Ford Dealership. We would admire and look at the new arrivals and watch who in our area was buying what. 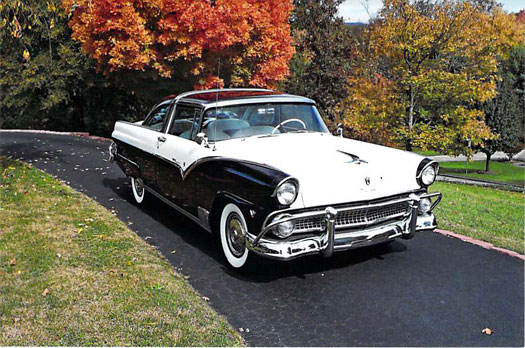 My lifelong friend Ross Winklers’ brother bought a new red and white Crown. We would help him go wash and clean it up just to ride in it.

He took us to many NASCAR Races and other events. In 1956 he bought a blue and white Victoria new with the 225 H power option (this came only as automatic and he soon converted it to straight drive). This car was bought at “Schwan Motor Co.”, The home of the Curtis Turner and Joe Weatherly NASCAR dealer -sponsored Purple Wild Hog.

One night we were in the dealership around closing time and Joe Weatherly and his girlfriend (she looked like Loni Anderson) were present. Mr. Charles Schwan gave Weatherly some money and said “take these three boys and your girl to eat a good meal. They have been sending us new customers who have bought car from us and we need to show our appreciation.” What a thrill this was. If I had a bucket list started, this would have been at the top.

When it came time for me to buy a new 1956 Ford, my lunch money from school would not stretch far enough for a Crown.
A new black 1956 Club Sedan was all I could afford (remember I was still in school.) The price was $2,650 and a Crown was $3,200-$3,600 in our area. I finalized the deal and Ross and I skipped school and went to the adjacent town Morgantown did a dealer trade and the 70- year-old new car sales manger would not let me drive it back.

My 1956 was never fast as the other 1956’s. I will always blame the sales manager driving 30 mph back from the dealership 198 miles away, because he didn’t run it hard and break it in fast.

I did everything I could to improve performance with spending money. I would change valve settings, timing and sheet metal, screwed in the linkage where the vacuum was to open 4 barrel. I removed the air cleaner, ran it without a fan blade, took out the spare tire, jack and lug wrench and even the back seat. I took wire and wired open the heat riser in the in manifold. Nothing I did helped my car. It was embarrassing when guys would take their father’s family car and out run me. I was soon a fan and spectator at our midnight street racing.

In 1993 I bought and restored a 1955 solid white glasstop and won first place at Crown Victoria Association at Charleston, NC.

In 1999 I bought a restored blue and white Crown at the Raleigh, NC Convention.

Somewhere around 2007, I bought a 1955 black and white Crown from CVA member John Church in North Wilkesboro. I updated many small and large items. New tire, hubcaps, trunk mat, OS steering wheel and power steering, horn ring, new lenses, inside door handles, inside panels, seat covers, power brake pedal, day/night mirrors and many other small retail pieces. This car came with wrap-around bumper guards, stone guard deflectors, rocker panel moulding, outside mirrors and many other things. Engine 272, auto trans, alternator, power disc brakes and small Lincoln rear end. This last car has been a enjoyment to me. I have one 560 mile round trip with it. Each time I look at my car I am looking back to when I wanted one so bad. Now I have had five and enjoyed them all.