I drove from Nashville Auto College in Nashville, Tennessee to Hopkinsville, Kentucky. There I traded in a 1949 Mercury Coupe that had a new battery in it (of which I removed before I got there and replaced it with an old one) for a 1955 Ford Fairlane with radio, skirts, and overdrive transmission at Barnes Motor Company. After going back to my parent’s house, I headed back to Nashville at breakneck speeds. This was in March of 1955. I went on my first date with Shirley in April of 1955 to her junior class play. We were married on March 29, 1956 (just two months before her graduation) at Little West Fork Baptist in the Ringgold community of Montgomery County, Tennessee. From there we went on our honeymoon to Lookout Mountain in Chattanooga, Tennessee on old 41 which was the crookedness road that I had ever drove on. The car was always reliable and good looking. 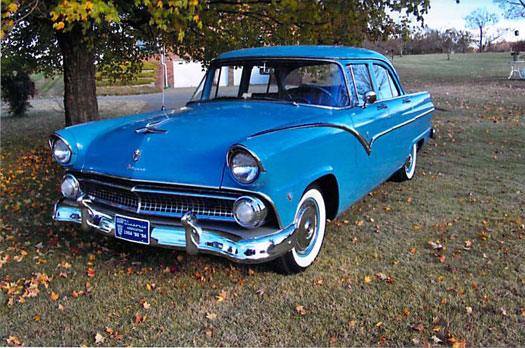 It hauled many baseball players all around middle Tennessee and Southern Kentucky as my father, brothers, and I played in men's league (as many men did in the 1950s and 60s). I played until I was 33 years old. The car also took trips to the beaches of Florida only to get stuck in the sand. We also went to Darlington Raceway and St. Louis to baseball games.

Shirley and I started to look for a similar car in the mid-1990s. We came across the right year and model in an ad. I did not know the color. We made the phone call and the next Saturday it was too cold to work on the fence that needed to be repaired (ha ha). We headed out for a three hour drive not knowing the color or that the model and interior were exactly the same as our first 1955 Ford. The ad didn’t say that it was a low mileage and original car. It had the 19,436 miles on it. As we drove in the driveway Shirley said “You will drive it home today. We took it to the 1996 CVA convention and also make the same trip as we did on our honeymoon run.

In 1990, I started to get classic cars and trucks to run in the Veterans Day parade. As I am writing this we just finished the 2013 parade where we hauled World War II veterans. I was lucky to get to drive my company commander in this aqua-tone blue 1955 Ford. 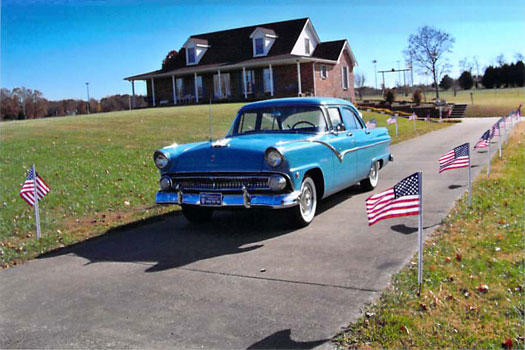 Now as the Ford is creeping up on 25,000 miles and the Po’ Boy is slowing down. I still like to get it out in the spring and fall for a Sunday afternoon cruise, but the boot is not as heavy as it was in the ‘50s. I did always keep the shine side up. I have lots more to say but I will close for now.

So keep the shine side up!

PS. This ‘55 Fairlane is all original exterior paint and interior is in excellent shape for its age. The paint is faded a bit. When the Veterans Parade was over the odometer rolled to 24,501 miles.