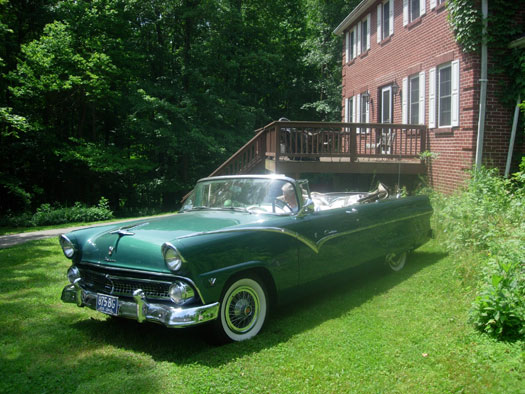 One day last winter, I sat in my basement fiddling with the seemingly 70000 scraps of balsa wood that were supposed to look like an RC airplane when I was finished. My automobile tools were lying idle on the garage floor; somewhere near the last place I used them. The "Boss" decided it was time to inform me that I would be accompanying her to a sheep-herding seminar in Ohio over the Memorial Day weekend.

Well sheepherding ranks right up there on my priority list, somewhere near cleaning up the garage, a situation about which the "Boss" has oft chided me.

"If you would put your tools away when you're done with them you would save a lot of time" she says.

"I venture to say that the time finding them is totally offset by the time it takes to put them away" I reply.

At that point the conversation is usually over.... There is no sense in beating a dead horse. "Ohio" I thought...I was pretty sure you fell off the end of the earth at the West Virginia border, however I was willing to take the risk for matrimony's sake. "What can I do in Ohio while she is sheep herding", I mused? Mike Beckwith, one of our clubs 1955 tech advisers, he lives in Ohio! I've wanted to meet him for years, since he saved my butt so many times on my ‘55 Crown project.

I phoned Mike and he said he would love to get together. Over the next few months emails flew back and forth between Ohio and my home near Baltimore MD. First we were going to attend a big swap meet in Springfield Ohio, but then he said he didn't like going there on the weekend because of the crowds; would I mind going over to a fellow club member, Bill Lindsey's, house to see his collection of 65+ classic cars? "Would I mind!!!" WOW! 65 cars - this guy is my hero already and I don't even know him!

Memorial Day weekend finally came and the "Boss" and I packed up the dogs and fought our way over the mountains toward Ohio, through 44 deg fog and rain. "Would this be a Chamber of Commerce day for you?" I asked the lady in the WVA welcome center. She shot me a "Don't you think you're cute look", then smiled her dutiful smile, and we forged on. We arrived in Greenville, Ohio on Friday evening, checked into our B&B, and were able to get a decent night sleep, considering being in a strange bed and a totally disrupted schedule. 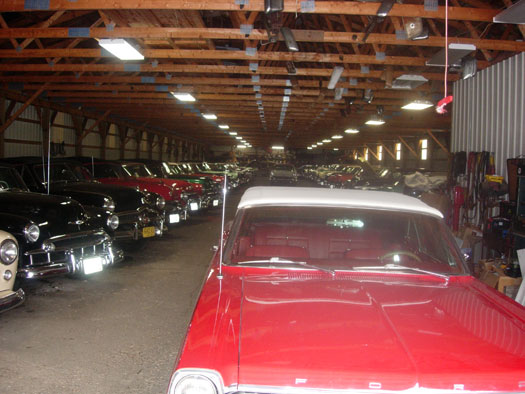 On Saturday, I decided to drop the "Boss" off at her sheep-herding seminar and attend this swap meet at Springfield. It was very nice, certainly worth seeing if you are in the area. It is not quite as big as Spring Carlisle, but big enough that my knees and back gave out long before the rows of cars and vendors did.

The next day I was supposed to meet Mike at 11:30 AM. I dropped the "Boss" off again and headed toward Cincinnati, giving myself an extra hour for me and Lady Garmin to work this thing out. A few miles down Rt 137 this "ROAD CLOSED DETOUR" sign pops up. The way it was situated I couldn't tell if it meant the road I was on or the side road, so I went ahead on Rt 137. Finally I see another "ROAD CLOSED" sign. At this point my awesome power of common sense kicks in and I quickly deduce they must mean the road I'm on. I took a right turn in the direction the detour signs were pointing to the tune of "Recalculating.....Drive 3.4 miles then turn left." At this point I'm not sure what to do. I have no road map; they seem to be a thing of the past, you can't even get them in gas stations anymore.

O.K., I see no more detour signs, I have no clue what road I'm on or where it goes, so I guess I'd better listen to the Lady. I took the turn she suggested and we traveled over hill and dale for about 5 or 10 minutes and she tells me to turn right, where I am greeted by my favorite sign, "ROAD CLOSED". I jammed on the brakes and made a quick U turn. This time she told me to turn right which was opposite of the way we came. O.K, maybe this time she has her act together. We traveled down roads only slightly wider than my compact car with moguls that would have made a dirt bike racer proud to negotiate. Nothing to worry about, it's a beautiful country morning, just you, the birds, the grass, and the cows.....Even if you think you've seen the same herd four different times in the last 15 minutes.

Eventually we zoom up to a larger road and my spirits begin to brighten, "Why did I even doubt the Lady?" "Turn left" she says triumphantly..... "ROAD CLOSED" Now my Garmin is an older lady so she can't do all of the things the younger girls can, but respect is called for, even under these circumstances. I'm also accustomed to dealing with older women, having been married to the same one for almost 50 years, but at least she doesn't tell me where to go when I know she's dead wrong.....Oh wait.....Yes she does!!!!

O.K, respect be damned.....Man up...Put the sun at your back and travel that direction until you find a larger road that looks like it might actually go somewhere. Of course " the sun at your back" is just a metaphor for looking down at the little W on the dash that tells you your car is pointed west. Eventually I found a larger road that even Lady Garmin agreed with and we beat feet on to Mike's house. 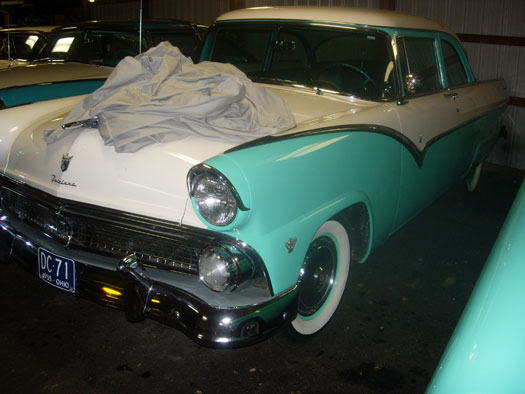 As I drove up Mike's driveway his friendly flock of wild turkeys greeted me. I felt right at home. Mike came out and we proceeded to his garage to check out his collection of cars both large and small. He collects antique toy cars as well.
As my eyes pored over his beautiful cars I couldn't help noticing the similarity between his garage and mine. It actually put a total lock on my theory that real old car guys never clean their garages. I can't wait to tell the "Boss".

All kidding aside, Mike has some really sweet rides. We talked and talked just like we did on the phone when he was helping me with my 55 Crown. Finally Mike told me that he would not be able to go to Bill Lindsey's house, because of personal problems, but he had asked a friend and fellow club member Terry
Cooper to take me over.

Terry showed up, I said my thanks and goodbyes to Mike, and off we went around Cincinnati into the Indiana countryside. Terry took over the directions from Lady Garmin and I think she is still peeved about it till this day. She throws a few wild goose chases at me now and again just to remind me.

When we arrived at Bill's house he met us in the driveway and took us around to a huge metal building totally filled with cars from the 30's through the 70's. It was amazing...I'm not sure, to this day, that it wasn't all just a dream. This was old car heaven, but I guess since I have all of these pictures, it must have been real.

Bill backed out a pristine 1956 ford convertible just to start us off. Then we started down the isles. There was a matching set of black 1950 Ford and Chevy ragtops, a 1936 Ford, a model A, a1940 Ford coupe, lines of ‘55, and ‘56 Ford convertibles, Crowns, and sedans, even a perfect 1955 Ford station wagon. I have never seen a collection anywhere close to this. It's enough to make Jay Leno weak in the knees. 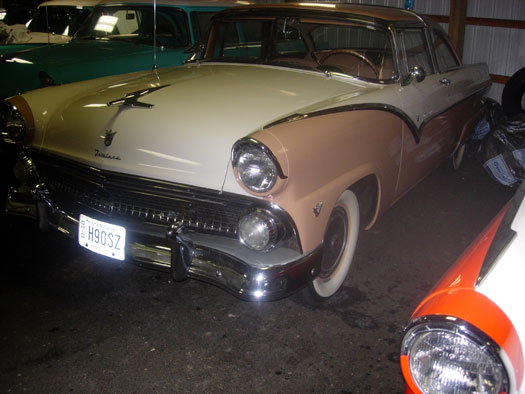 He mentioned that he has a hard time getting to drive all of them in a year. I can imagine, since I can't even keep the 4 that I have running properly. There were fenders, doors, hoods, bumpers, and all manner of body parts lining the rafters. Next door in an addition there were more cars and engines lined up in a row from front to back. A lot of Y blocks, flatheads, 302s, There was probably even some GM stuff in there.

Finally, after trying to get as many pictures as I could, we had to say our goodbyes because there was still the "Boss" to pick up at the sheep-herding seminar. I left in awe of such a collection of classic cars and with photographic evidence to show the "Boss" that you can never have too many old cars and that a clean garage does not an automotive expert make.

Looking back on it, I believe I really did visit old car heaven that day. At least that's the way I see the "Pearly Gates." Streets lined with gold and 1954, 55,and 56 Fords and maybe even a Chevy every block or so to show our concern for the under privileged.

MY THANKS TO MIKE, TERRY, and BILL