In 1969 I had been looking for an old car to restore. I found one in Charlotte, Tennessee for $250. It was a Model “A”. The fenders were ripped in half with no running boards and it was in real bad shape. I started working on it in 1970. It took five years to complete. I joined a club and drove it every week in rain or snow or what over. During that time I was looking for a 1952 Ford truck. I found one for $400 and drove it home. 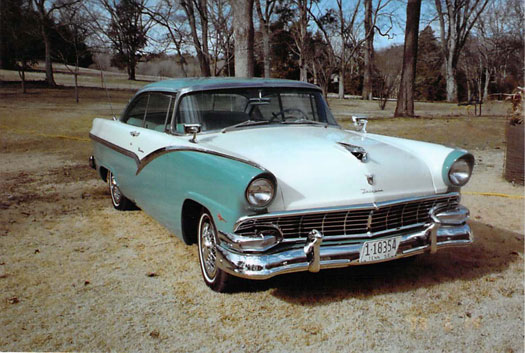 I always wanted in 1956 Ford 2-door hardtop. I found one in Wheels & Deals Magazine that was only 35 miles from home. I went and looked at it and I like it so much that I brought it. That was in 1993. I played with it for two years. In September of 1995 I started taking it apart. I move the car into the garage and took off the hood and the front of the grill and radiator. I borrowed a motor puller from a cousin. I pulled the engine and was moving it using the puller to the other side of the garage. The wheel broke off. I went one way and the engine went together. I spent three months getting over a hernia.

After this I started back on the ’56 Ford. It looked like everything was looking good – wrong. The doctors found a black mole on my right temple. They did another surgery and followed it up with plastic surgery. One year to the date of finding the black mole, they found one on my back with cancer. I ended up with a 7” scar. It took 16 years to finish the car.

This one I am keeping!