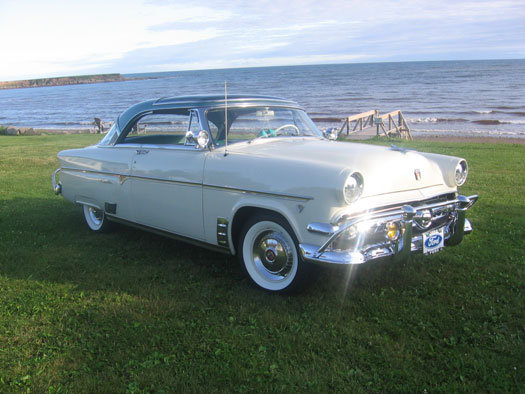 Here is a brief story on my 54 Ford Skyliner (Canadian flathead). It has 255 cubic inches and was 1 of 480 produced in Canada.

My Skyliner was bought new in Point du Chene New Brunswick on May 22nd 1954 by Mrs. Lapraik from Alex E. Ross, Limited Sales and Service in Moncton, New Brunswick. The sticker price was $3426. The car is Killarney green over Sandstone white. The Skyliner remained in her family until approximately 1990 when it went up for sale.

The car was bought by a Ford collector in Moncton and he kept the car for 10 yrs. The paint was dull when he bought it so he had it painted at the Lamb Ford dealer in Sussex, New Brunswick.