In 1963, I was a Junior at Paxton High School in Jacksonville, Florida. My dad was the pastor of a small church and a mail carrier for the Duval County School Board and Mom was a homemaker so, needless to say, they didn’t have any extra money to throw around and us kids learned very quickly that, if we wanted it, we got out and worked for it. So, I landed a part time job on a dairy farm about a mile from where we lived. It was gut wrenching hard work but I stuck it out and worked to pay my own way through high school and saved up enough money to buy my first car. Back in those days, it was every school boys dream to have a drivable car, and, those who had to get out and work for one, like I did, parked it very close to Heavens Gate and guarded it with there life. 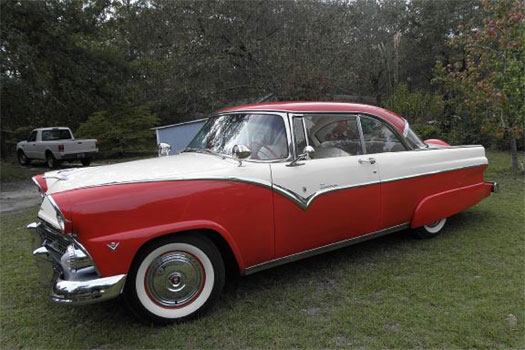 I fell in love with a very beautiful Florida farm girl and when I graduated in 1964, I joined the military and ask her to marry me. She said yes and, while most of our dates were just to church or on family outings, the 55 was our dream car. I drove the 55 back and forth from Fort Jackson, in Columbia, SC, to Jacksonville Florida every week end to visit her until I was deployed to Korea in 1965. While I was in Korea, I did something that I regretted for many years. I sold my beloved 55 to one of our church members.

I eventually married and settled in South Carolina near Fort Jackson. The years passed quickly by and I often thought of my beautiful Victoria and wondered what could have happened to her.

Before I knew it, it was time to think about retirement and I couldn’t stand it any longer. I set out on a quest to find out what happened to her and if she was still in one piece. Two years of searching and running traces finally paid off in October of 2010. I found the owner of the car who had it stored in a garage in Fort Lauderdale Florida. The car had been a Florida car, from Jacksonville to Clearwater, to Dania, to Pembroke Pines, to Hollywood, and finally to Ft. Lauderdale Florida. The engine was in need of an overhaul and the rocker panels, hood and deck lid were rusted out but I made him an offer he couldn’t refuse. I drove to Florida, a 700 mile round trip, with a cashers check in hand, and towed my baby, back home that same night. 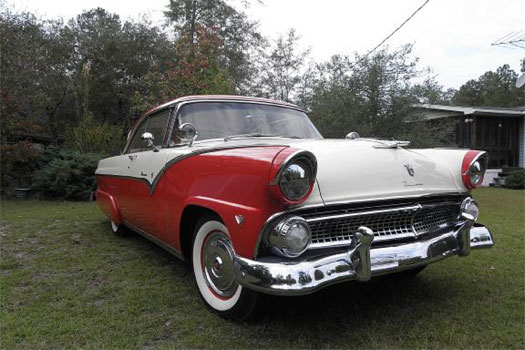 I owe a lot of thanks to Terry Miller who did a lot of the body & paint work and the upholstery at Blaney Body Shop, and, my friend, Don Stickler, in Salisbury, NC who supplied a lot of the parts, we pulled & overhauled the engine, stripped the car down to the frame and replaced or reconditioned every piece of it right down to the window regulators. All of the rust was replaced with new metal and Don supplied us with a near perfect rust free hood and deck lid. The front brakes were converted to disk. I sent the radio to Retro Radio in Elizabethtown, PA to have it converted to AM/FM digital and the clock to D&M Restorations in Greenville, SC to have it converted to quartz. After a new paint job, and lot of re-chroming and polishing, we added air conditioning, original style wide white walls, a continental kit, dual spot lights, cruiser skirts, and lowered