In 1961, our first year of marriage, we purchased a 1956 Ford Sunliner Convertible. It was Torch Red with a 312 engine with standard transmission with overdrive. I believe it was the fastest car I had ever owned at that time, but it wasn't practical once the children started coming. So it had to go. 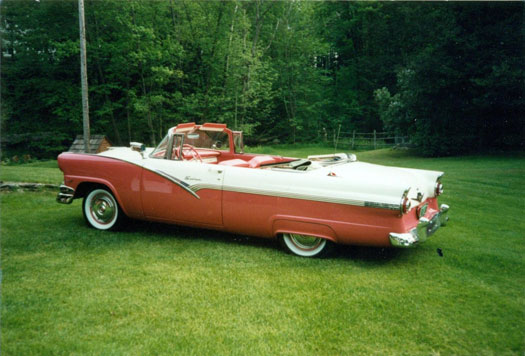 We worked hard and raised four children. In 2007 our youngest son purchased our business, and since then I have been very busy chasing and finding parts for our new project. It is a 1956 Crown Vic Skyliner, which we purchased in 2005. But I should go back to the first 1956 Ford that we restored. By coincidence, these two cars were originally owned by the same person.

It was in 1994, we bought a 1956 Ford Sunliner Convertible at a bank auction. I had the car done at two body shops, both were total disasters and the car was not that bad to start with. I heard about a body man in Pawlet Vt. named Gary Stone. I took the car to him and he did a remarkable job. It is Fiesta Red and Colonial White with a lifetime warranty on the paint job. We took it to an all Ford car show and it won best of show. Our first show and best of show - WOW! It has also taken many other trophies over the years.

My next buy was a gorgeous 1956 Ford Panel Van. I then cooled off for a while. I got the bug again and traded a $1000.00 snowmobile for a 1956 Club Sedan with a perfect body from the firewall back. I wanted to Street Rod this one. I took the body off the frame and took it to Gary. At first I thought I wanted to chop the top but while reading Rod and Custom Magazine I thought maybe suicide doors. I called Gary and talked to him about my idea and he said, "I think I can do that." While Gary was doing the bodywork I was doing the mechanical. I put in a 429 with a C-6 tranny. In a couple of weeks Gary called and said "I got one door done it took me ten hours." Since that was his first attempt at doing suicide doors the second one door went a lot faster. When he finished the bodywork I thought it was the most beautiful car ever created and the fastest 56 that I will ever own. 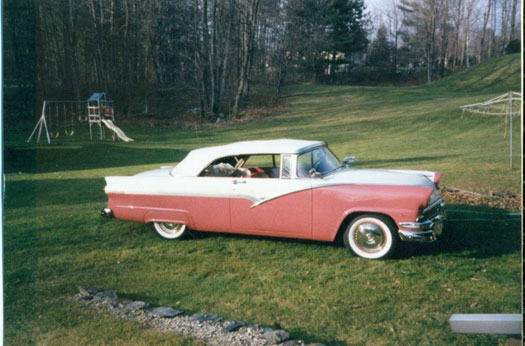 The Crown Vic Skyliner will be my last project. After Gary did one of his great jobs painting the exterior he moved to Ohio.

Now, here it is Jan. 2013 and the Crown is not finished. It sits in the garage waiting to be completed. The headliner, tail pipes and ABC upholstery is done but not installed. I have become discouraged with the project and am thinking of selling.