It all started in the spring of 1956 when my Dad pulled into our driveway with a brand new 1956 Mandarin orange and colonial white Ford convertible. Wow, what a car... I was hooked on ‘56 Fords, then and now. The car was for my mom, Helen. Dad had special ordered it from Collingwood Motors, Findlay, Ohio, our town’s, longstanding Ford dealership. The options included power steering and brakes, a safety equipment package, which included safety belts, a special steering wheel and a padded dash. Also in the optional order was an automatic transmission and after-market Yankee, fender-mounted mirrors. And of course, the high impact Mandarin orange and colonial white paint option. The real truth was that Dad enjoyed driving the car as much as Mom. He also knew that it would be the first car that I would drive. It was the first car that I would "officially" drive, when I got my license a year later (actually Mom let me drive her 1951 Chevy out in the country prior to that!) 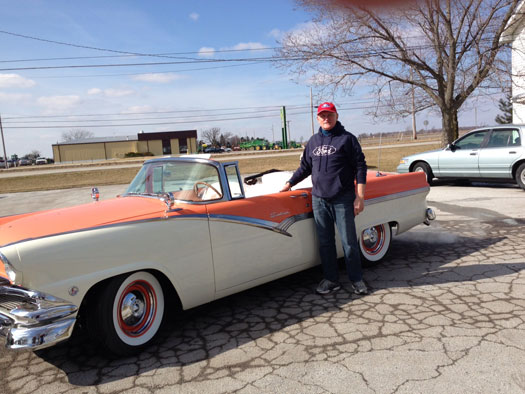 It was the car I first dated in and cruised through the local Big Boy drive-in restaurant. I always remember that one of my brothers left his tooth marks in the padded dash, which upset me very much, as it really looked terrible. Dad finally traded the ‘56 in for a 1961 Thunderbird. I knew the guy who bought it from the dealership. Several years later I moved away from home and lost track of it. I always wondered what ever happened to it.

My Dad’s family always had Fords. From the model T’s on. My grandmother drove a 1956 black and white Custom line 2-door, which I often drove, taking her on errands and short trips. As most kids in the ‘50s, I always had a fascination with cars. I could name almost every car and identify the year as well as the model. Most of my high school friends had their own cars, but "oh no, not me". One of my best friends had a 1934 Ford 5 window coupe, which I helped him restore. I had my eye on a 1940 Ford that the original owner had up for sale as he could no longer drive. I told my folks about it and they said they wouldn’t buy it for me. They reluctantly agreed to allow me to buy it with my own money... GREAT!!! So I quickly got a carryout boy job at the local A&P market. In less than a year, I saved $250, $200 for the car and $50 for insurance. I thought that would do it... "Wrong!" They had then set up a new requirement that I had to buy my own insurance and not just add the car to the family policy, as most of my friends who had cars were able to do. The policy that my folk’s insurance agent outlined would cost as much as the whole car... This was a "conspiracy"..... I was done for. They were convinced that a car would lead to my ruins. So what they did was create a "Monster"... a hopeless "Car Crazy" guy.

In Mom and Dad’s defense, who loved me in an unqualified fashion, they did allow me to convert the ‘56 to a manual transmission, which Dad disliked, install loud pipes and put on Olds flipper hubcaps. So off to college without a car. Finally at the end of my junior year, after doing well in school, I was allowed to have my own car, that they chose, which was a Ford - a 1960 Falcon, not my idea of a "cool car"! But it was wheels and beat walking. 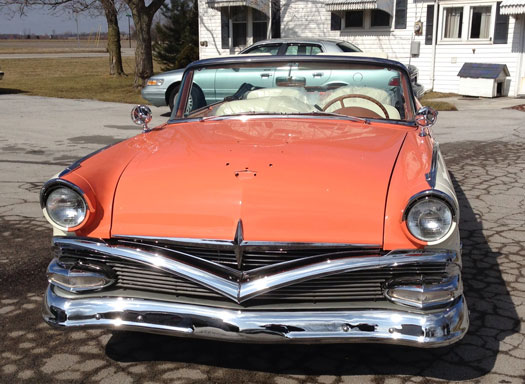 Even during and after college, grad school, marriage, military service, raising a family and a career, I still maintained my passion for cars. This included model A’s, various other Fords, MGs, Jaguars, Mustangs, and even a Pierce Arrow. But I always had a special place in my "car collector" heart for a ‘56 Mandarin orange and colonial white Ford convertible. So I looked at several ‘56s in the Midwest but the owners were "very proud" of their cars (i.e. too pricey). I checked out Hemming Motor News and other car magazines and even the Internet, but nothing of interest was found. Then I decided to place a wanted ad in Hemmings. I soon received a response from a guy who turned out to be true criminal, trying to sell me a bogus car (beware!). I sort of gave up on finding a car but approximately two years later I received a call from a man in Arizona telling me that he had seen the ad, filed it away and had just found it again, as he had a 1956 Mandarin orange and white Ford convertible for sale. He sent me pictures of a fairly complete but rough car, which was described as a "west coast" car. The purchase was negotiated and the car was shipped to Ohio. As one can see from the unrestored photos associated with this article, it needed "some assembly".... yaaa, a lot of time, energy, and green backs!

It’s been a 3+ year labor of love. I don’t pretend to be a mechanic or a body man, but I can scrounge for parts and sign checks and share my "two cents" for what I had in mind for the restoration. I have had a lot of expert help from local craftsmen on the project. She has been tastefully modified with a Canadian Meteor grille, Mercury station wagon taillights, a 351 Ford engine (No Chevys for this guy!) A.O.D. transmission, 9" differential, modern A.C., power steering, and brakes. Otherwise the car appears pretty much stock.

I have always named our cars.... Uncle Oscar, Max, Ruby Red, Royce, Clara, Ivy, Debi Lynne etc. "So, it was a no brainer" when it came to naming the "56", Helen, after my mother. Mom so much enjoyed driving the convertible plus sharing it with me. She was a wonderful loving mother and quite an adventurous lady, being the first licensed woman airplane pilot from her home state of Iowa. How ironic it is that her hometown was Bettendorf, Iowa, where she learned to fly, is the 2013 C.V.A. annual convention site. So you can imagine how much fun it will be to take "Helen" to her first C.V.A. convention and sort of "back home". 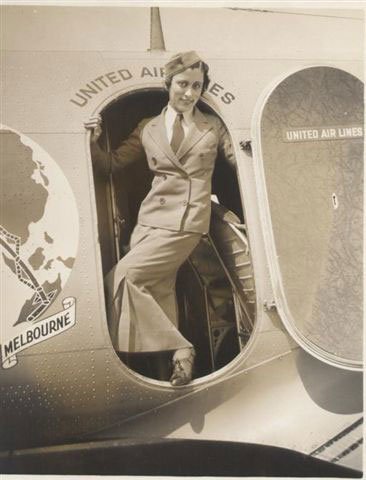 I have resided all over the country but I now live back in my home town of Findlay, Ohio, granted it is a different time and the world is another place now but, what a treat it is in having "Helen" and living the dream of driving her as I did the original ‘56 convertible during my youth of the ‘50s on the same familiar streets and haunts with my "gear head" girlfriend and now wife Deborah.... "It can’t get much better!!"